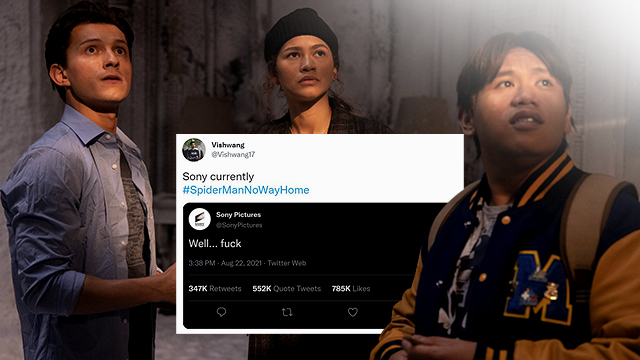 Seems the trailer for the long-awaited movie really got leaked.

(SPOT.ph) We've been waiting for the third Tom Holland Spider-Man movie for what feels like centuries (2020 counts as 100 years, definitely)—and it looks like someone just couldn't wait any longer. Sony is doing its absolute best to wipe any trace of what seems to be a leaked trailer for Spider-Man: No Way Home from the Internet. The supposed leaked clip went around early morning on Monday, August 23, Philippine time. Meanwile, Twitter responded the best way possible: with a mess of memes.

Spider-Man: No Way Home follows the 2019 Far From Home movie and is the third installment of the Tom Holland-as-Spider-Man universe. And it is also, by far, the most secret! Especially given that the theatrical release date in the U.S. is on December 17, 2021, fans barely know anything about it. It is months away and we don't even have a trailer yet—or at least, an official one.

Also read: The Spider-Man 3 Stars Just Gave Us a Masterclass In Spoiler-Free Trolling

Holland, along with co-stars Zendaya and Jacob Batalon, did troll fans when they dropped a few possible titles alongside official movie stills in February. And now the alleged leaked clip—which we can't talk about but Hollywood Reporter said looked legit—has everyone even more hyped.

The supposed Spider-Man: No Way Home Trailer Leak Has Fans in a Meme-Able Mood

Look, Holland has a history of spoiling stuff. And while none of his, erm, blunders, have been this big, fans were quick to make fun of the relief the actor must be feeling knowing it's not on him this time. Or at least, we really, really hope he isn't in any way connected to this alleged leak!

#SpiderManNoWayHome
Tom Holland Tom seeing he
realizing that the wasn’t the one
nwh trailer got leaked to leak it pic.twitter.com/o1E5SA2uJi

#SpiderManNoWayHome
Tom Holland seeing Him after
that the No Way Home realizing that
trailer leaked: he didn’t do it pic.twitter.com/9TZWBgVNpV

Meanwhile, others were quick to connect this incident with another, this one involving the Black Widow Scarlett Johannsen and that legal feud she's currently in with Disney. We doubt Nat could do such a thing, but the memes sure are funny.

scarlett johansson leaking the no way home trailer as part of the lawsuit #SpiderManNoWayHome pic.twitter.com/3dH2a8pGOA

It’s quite obvious who is leaking all this #SpiderManNoWayHome stuff right now pic.twitter.com/DOIkrNEFwL

Scarlett Johansson in the Sony-Disney server room figuring out how to leak the SpiderMan trailer #SpiderManNoWayHome pic.twitter.com/8gmwvmhqLo

Marvel Studios President Kevin Feige also made an appearance in the memes doing some hardcore damage control. Feige recently spoke up on how he doesn't feel like there's any added secrecy to the third Spider-Man installment's treatment. "It has not necessarily occurred to me that it is any more or less secret than any of our other projects. I think all of our projects… we want to preserve surprises. That's all the secrecy is for," he was quoted by Cinema Blend. Sure, Feige.

Kevin Feige arriving at the home of the person who leaked the #SpiderManNoWayHome trailer pic.twitter.com/Hkr6vupN6N

For others, though, they were just happy to have seen the action. Even if it was pixelated, or so we hear.

the leaker walking out of sony headquarters after being fired#SpiderManNoWayHome pic.twitter.com/I3A2UMOGkX

Me trying to see if andrew garfield and tobey maguire is in the trailer from 144p screen #SpiderManNoWayHome pic.twitter.com/Nj2hFDIj5b

@ everyone who managed to watch the trailer before it got taken down......we made it folks #SpiderManNoWayHome pic.twitter.com/AqLrmQhtRi

Adventurer Savvy Seasoned Spider-man Tom Holland Memes Humor Twitter Staying In
Your Guide to Thriving in This Strange New World
Staying
In? What to watch, what to eat, and where to shop from home
OR
Heading
Out? What you need to know to stay safe when heading out