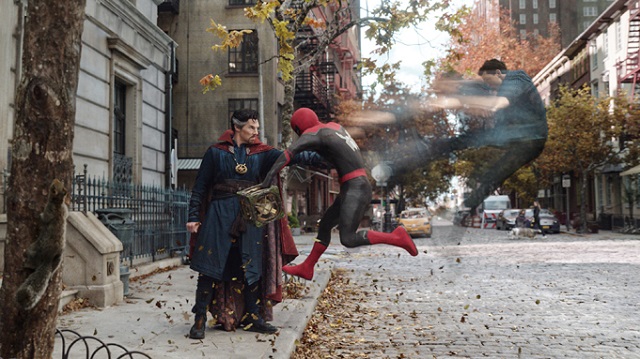 The Biggest WTF Moments From the Official Spider-Man: No Way Home Trailer

Where the hell are Tobey Maguire and Andrew Garfield?

(SPOT.ph) Barely a day after an alleged leak went around social media, the legit first trailer for Spider-Man: No Way Home was finally released on August 24! Which means that yup, we finally have confirmation on the main premise of the much-awaited third installment: multiple universes all jumbled up in the latest Spidey universe. Okay, we'll keep quiet now and let you take it all in. Then we'll dissect the biggest shockers below!

The biggest details from the Spider-Man: No Way Home first trailer

No Way Home picks up right where Far From Home left off, end-credits scenes included. Which means that everyone knows Peter Parker (Tom Holland) is Spider-Man, he's been framed for Mysterio's death, and yup, he is now seen as the bad guy. There's a clip of Peter being interrogated by what look to be police saying that the drones were under his control, not Beck's (a.k.a. Mysterio or IRL Jake Gyllenhaal).

With even Peter's friends and family in the line of fire (Read: Public judgement), he sets off to get help from Dr. Strange (Bumblebee Crumblepot—we mean, Benedict Cumberbatch). The fact that Peter straight-up called him "Stephen" was strange enough, though it was on his request, but we're even more weirded out that the great sorcerer just went "yeah, sure" to basically altering time. Can't he see all the possible futures?

Peter Parker Messes Up Dr. Strange's Spell By Being Himself

Okay, so Peter's teenage awkwardness is always a huge part of his story—but, really? Peter starts having second thoughts while Dr. Strange does the spell, asking about his now-girlfriend MJ (Zendaya), bestie Ned (Jacob Batalon), and Aunt May (Marisa Tomei), effectively fumbling the spell. There are some magick-y circle things and poof! The lines between universes have been muddled.

Doctor Octopus Is Back—and So Are the Others

Alfred Molina's Doctor Octopus from the OG Tobey Maguire film franchise is the main villain we see in this new trailer. But Willem Dafoe's The Goblin is also teased with that green pumpkin, and there's some electrical stuff that has to be courtesy of Jamie Foxx's Electro!

The Lack of Tobey Maguire and Andrew Garfield Content

Okay, so, this detail is based on the biggest thing that wasn't in the trailer: appearances from the past two Spideys! Everything has been set up for them to be a part of the third movie though. There's the multiverse courtesy of Dr. Strange and of course, the old villains are here. After all, which "Peter" do you think Doc Ock was saying "hi" to?

Spider-Man: No Way Home is slated for a theatrical release in the U.S. on December 17, 2021. No word yet on streaming but if you need us, we'll be off manifesting a Disney+ launch in the Philippines before then.

Adventurer Savvy Seasoned Marvel Spider-man Tom Holland Staying In Mcu
Your Guide to Thriving in This Strange New World
Staying
In? What to watch, what to eat, and where to shop from home
OR
Heading
Out? What you need to know to stay safe when heading out