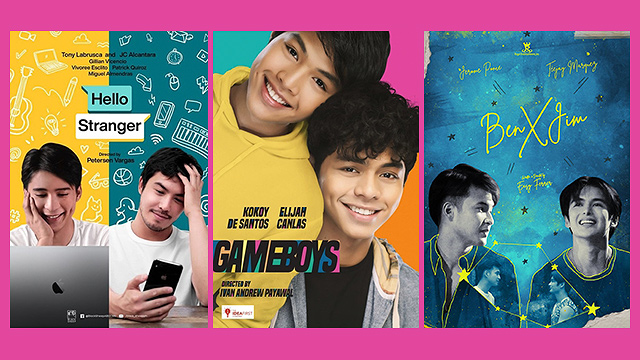 10 Boys’ Love Series on Netflix That'll Get You Hooked

Some are funny, heartwarming, or even both.

(SPOT.ph) It’s been a long time coming for Boys’ Love or BL series to be normalized in movies and series, especially in the Philippines, but we’ll take what we can get. And get as much as we must. Check out this selection of local and international BL series on Netflix that are sure to get you hooked (if you aren’t already, that is!).

Also read:
A Beginner’s Guide to Boys’ Love, As Told by The Boy Foretold by the Stars’ Director

Hop onto the Boys' Love train with these BL series on Netflix:

Gameboys is the first Zoom-born series in the Philippines, and it follows the story of Gavreel (Kokoy de Santos) and Cairo (Elijah Canlas) whose meet-cute happened in a game stream. As their friendship develops, they get to know themselves and each other deeper. Don’t be fooled by the kilig though, behind the flirty banter is a relevant telling of the pandemic (as it happens!) and tackling of societal issues and one's sexuality, among others.

While we do not condone the sexual harassment and abusive allegations associated with the writer of this show, the message and representation that Gaya sa Pelikula advocates for the LGBTQ+ community is still worth spotlighting. It’s about Karl (Paolo Pangilinan), an architecture student who, by family tradition, is forced to live alone and fend for himself. There, he meets his neighbor Vlad (Ian Pangilinan) who has family issues of his own. The meet-cute is more of a meet-annoyance that eventually leads them to living together.

If you’re looking for an easy binge, this show is for you. Ben (Teejay Marquez) and Jim (Jerome Ponce) are childhood best friends and next-door neighbors. They lose touch because Jim’s family decides to move, but the two reconnect eight years later when Jim goes back to his childhood home to spend the quarantine lockdown. Now with two seasons and a third one already in the works, it’s safe to say that the show is effective in making its audience want more.

This Japanese romantic comedy focuses on a love triangle between working professionals with a notable age gap: unlucky-in-love 33-year-old Haruta Soichi (Tanaka Kei), his 55-year-old boss Kurosawa Musashi (Yoshida Kotaro), and his 25-year-old co-worker turned roommate, Maki Ryota (Hayashi Kento). Another thing that’s great about it is it packs on the LOLs just as much as the feels—it’s funny, beautiful, and sensitive at the same time (read: no mockery in exchange of laughs).

This Swedish BL series is set in a prestigious boarding school which, heir to thethrone Prince Wilhelm (Edvin Ryding) is forced to attend after a scandal. There, he meets Simon (Omar Rudberg), a non-resident scholar from a working-class family. The two develop a friendship that eventually leads to the prince having to make a difficult choice between love or duty. Plus points for body diversity, normalizing textured skin on screen, and a cast who actually look like actual teenagers.

Boy meets boy—boy is a jock, the other one, a nerd. Boy hates boy until they get assigned to work on a school project together. Such is the story of high school students Xavier (Tony Labrusca) and Mico (JC Alcantara) in this pandemic-born series where most interactions aptly revolve around an online-learning setting. While a story like this has been done before, it still succeeds in making hearts flutter, what with two good-looking, talented leads with palpable chemistry.

Adapted from a novel by JittiRain, 2gether follows the story of college law student Tine (Metawin "Win" Opas-iamkajorn) who tries to ward off a persistent gay admirer by asking Sarawat (Vachirawit "Bright" Chiva-aree) to pretend to be his boyfriend. You probably already know the rest, but it’s something you don’t want to miss out on.  The show’s a lighthearted and fun watch that will leave you wanting for more after a 13-episode binge.

Still 2gether, still funny and romantic, and still making hearts flutter--Tine (Metawin "Win" Opas-iamkajorn) and Sarawat (Vachirawit "Bright" Chiva-aree) are back for a sequel of their wildly successful show, 2gether The Series. This time, their romance is challenged by differences between their respective school clubs. While it only has five episodes, it features different kinds of relationship dynamics as well as address some questions from the first series.

Get lost in the magical world of Wei Wuxian (Xiao Zhan) and Lan Wangji (Wang Yibo) in The Untamed, a 50-episode series adapted from the hit queer romance novel Mo Dao Zu Shi. It stays faithful to the material in telling the story of Wei and Lan who form a bond despite being two completely different people coming from different worlds and opposing magical clans. The rich, thoughtful, and well-crafted series has fans laughing, crying, and feeling all the feels at the same time. Keep in mind that the queerness is subtle (something to do with censorship regulations) but it’s definitely there.

Not to be confused with the 2gether franchise, this Thai show is about childhood friends Korn (Max Nattapol Diloknawarit) and Knock (Tul Pakorn Thanasrivanitchai) who reunite in college. After being intimate one drunken night, their relationship becomes complicated, mostly because of Knock who has a girlfriend but can’t seem to shake off his feelings for Korn. Fun fact: The series is four years old and may not be as progressive in terms of storytelling compared to the more recent ones, but it champions love between two males just the same, and that is always a step in the right direction.

Adventurer Savvy Netflix Streaming Services Con-00263 Horror Staying In Guide Greener Boys Love Bl Series
Your Guide to Thriving in This Strange New World
Staying
In? What to watch, what to eat, and where to shop from home
OR
Heading
Out? What you need to know to stay safe when heading out