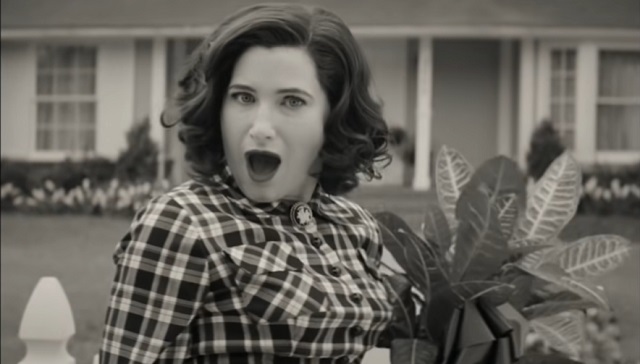 There's an unexpected connection between the show and Frozen.

(SPOT.ph) Whether you watched WandaVision or not, we're sure you heard the massive earworm that is "Agatha All Along" floating around online. With its old-school up-tempo beat that brought us back to Addams Family days, the song is so good it has even won the genre-bending series its third ever Emmy! Marvel Studios announced on September 13 that the track "Agatha All Along" was awarded Outstanding Original Music and Lyrics.

Also read:
For Shang-Chi’s Simu Liu, the Marvel-Newbie Nerves Are Very, Very Real
Marvel's Eternals Are Here. But Wait, Who Are They, Exactly?

Earlier on September 11, WandaVision won its first Emmys for Outstanding Fantasy and Sci-Fi Costumes and Outstanding Production Design, which means it now has a total of three. Plus, we could look forward to more on the award's ceremony night itself on September 20, PH time, with the Marvel series having a total of 23 nominations.

The WandaVision and Frozen Connection You Might Not Know

If you're wondering about the sorcery that went into the incredibly catchy "Agatha All Along," it turns out the song was penned by the same duo behind Frozen's "Let It Go." We have husband-and-wife team Robert Lopez and Kristen Anderson-Lopez to thank for the two tracks, as well as the sweet-slash-heartbreaking "Remember Me" from Coco.

"None of us knew this was going to be the song," Robert told the New York Times. "We woke up that morning to find that it was all over the Internet, and it was like 'This is awesome.'" According to the couple, they fittingly went the on-the-nose route for the self-aware show's twisted track so they chose some of the most Halloween-esque pieces of old-school U.S. pop culture: The Munsters, "Monster Mash," and yup, The Addams Family as inspiration!

The track was played in episode 7 of the genre-bending series, to accompany the huge shocker that is well, that it was Agatha all along. And with Kathryn Hahn in the hilarious shoes of Agatha Harkness, it really is an unbeatable moment.

Adventurer Savvy Seasoned Marvel Cinematic Universe Mcu Wandavision Frozen Staying In
Your Guide to Thriving in This Strange New World
Staying
In? What to watch, what to eat, and where to shop from home
OR
Heading
Out? What you need to know to stay safe when heading out