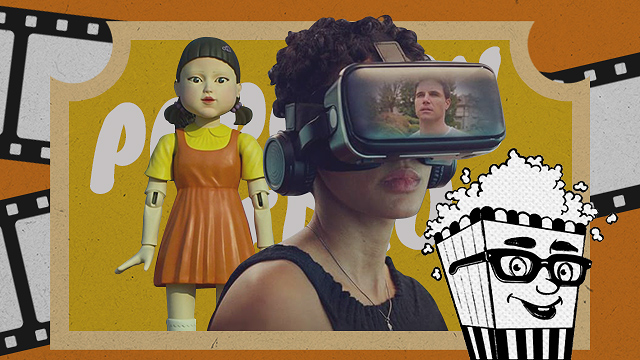 Or do, we're not the boss of you. Check out the other titles on our list!

(SPOT.ph) And just like that, it's the last weekend of September! With October rushing in, there are all sorts of new thrills coming to a streaming platform near you—but we've already got a couple of titles on our watch-list. This weekend, we've got the latest buzzy series to hit our screens along with a couple of no-fail titles to usher the Spooktober mood in.

Popcorn Pedro says: All the memes aside, this series gets very, very real. You've seen the buzz online—and it's about time you check it out for yourself. Squid Game is like a mix of Battle Royale and class struggle; Hunger Games but better (fight me on this). What do you get when you take hundreds of people with everything to lose and put them in a win-or-die setting? Your next addiction, at the very least. Childhood games cranked up to a murderous, deadly level in deceitfully playful settings with characters you can't help but root for? Sign me up—to watch the show, not to join the game.

Popcorn Pedro says:  This is the reason Evan Peters had to angrily thank Kate Winslet "for being Kate Winslet" at the recent 2021 Emmy Awards! Winslet stars as Mare Sheehan, a police detective in a Philadelphia suburb dealing with the murder of a teenage mother—and struggling to keep her own life together. Can relate, minus the murders that is. Both Winslet and Peters were awarded Outstanding Lead Actress and Outstanding Supporting Actor at the Emmys.

Popcorn Pedro says: There have been a lot of unforgettable series that dealt with the afterlife but Upload is a refreshing take. Nathan Brown (Robbie Arnell) has himself digitally uploaded to the Lake View program after a premature death. There he adjusts to the pros and cons of an online afterlife—while still dealing with his possessive girlfriend—and finding a friend in his (alive) customer service rep Nora (Andy Allo). The series gets pretty deep into life and the afterlife, and oh yeah, it seems Nathan’s death isn’t as surprising as it seems.

Popcorn Pedro says: This is one of the OG psychological-horror thrillers that pretty much changed the game. It even has its own Hollywood remake (Remember that Emily Browning thriller?). This creepy-slash-hauntingly-beautiful film follows a young woman who comes home after a stint at a mental institution to find that all is not well with a sister, her father, and the mysterious new step-mother. It is one of many films based on the Joseon dynasty folktale Janghwa Hongryeon jeon, in which two sisters are horribly mistreated by their stepmother and come back from the dead for revenge.

Adventurer Savvy Seasoned Popcorn Pedro Staying In Guide Netflix Streaming Services Prime Video Hbo Go Squid Game
Your Guide to Thriving in This Strange New World
Staying
In? What to watch, what to eat, and where to shop from home
OR
Heading
Out? What you need to know to stay safe when heading out