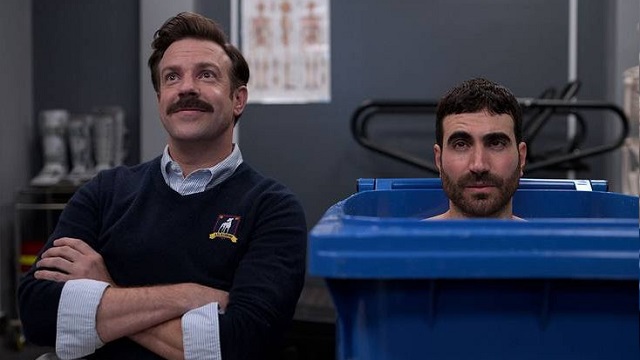 Ted Lasso Made a Big Emmys Splash; Proof You're Missing Out on This Unexpectedly Wholesome Gem

(SPOT.ph) The Primetime Emmy Awards had two big winners of the night over in the U.S.: Netflix's The Crown and Ted Lasso. We're sure you're familiar with the sweeping historical drama based on the Queen and her family—remember all that buzz about  the Imelda Marcos mention in the fourth season?—but Ted Lasso may not exactly ring a bell. "What jackass character could Jason Sudeikis be playing now?" you're probably asking. Well, surprise! The Horrible Bosses and We're the Millers star turns things around and gives us an oddly wholesome character for once, in the shape of an American football coach in a strange new place (Read: England) to teach proper football (or, well, soccer).

Why you're missing out on 2021 Emmy Awards big-winner Ted Lasso:

Ted Lasso premiered on Apple TV+ in 2020. It seemed like a pretty unambitious series at first. Fun-fact: Sudeikis first starred as Coach Lasso in a series of promotional skits for the NBC Sports channel back in 2013—a character that became the basis for the Emmy-winning series!

Ted Lasso is a small-time folksy U.S. college football coach with a good track record who is hired to fly over the pond and lead an English Premier League team called AFC Richmond. He's recruited by the team's new owner Rebecca Welton (Hannah Waddingham) for, it turns out, less than legitimate reasons. Lasso is clearly an odd fit for the job—but his undying optimism and kindness soon wins the English crowd over, along with all the folks streaming it online.

Don't let Ted Lasso's seemingly simple premise fool you (and you don't even need to know a lot about football, really). The show has been much praised for its feel-good vibe balanced off with with themes of therapy and self-help. With everything in the world turning to shit, it really isn't much of  a surprise people are in need of more uplifting stories. And if you're worried you'll be cut short, don't worry as it already has two seasons up on Apple TV+ with a third on the way!

Adventurer Savvy Seasoned Ted Lasso Apple Tv+ Streaming Services Emmys
Your Guide to Thriving in This Strange New World
Staying
In? What to watch, what to eat, and where to shop from home
OR
Heading
Out? What you need to know to stay safe when heading out