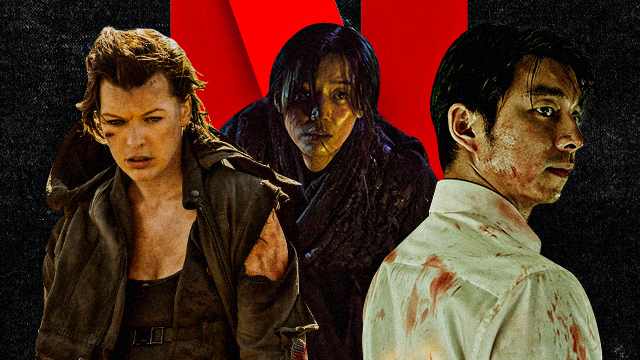 Apart from the typical vibe we get IRL, that is.

(SPOT.ph) There’s nothing quite like a zombie movie. Whether it’s on the scary side like Dawn of the Dead or on the funny side like Zombieland, you can expect blood, guts, gore, and mangled faces essential to the genre. Never really going out of style, filmmakers find new ways to tackle the zombie genre, with fresh new storylines that have uniquely memorable zombie kills along the way.

As the pandemic rages on and people are still stuck in quarantine, there are times just going outside feels like you’re in a zombie movie yourself. Putting on your “outside” gear (PPEs, shields, masks), making sure you’ve got your essentials (alcohol, extra masks), and then braving the outside world where it’s just a touch too quiet sometimes—we might as well be in an apocalyptic zombie movie. But if you can, we're sure you'd rather get the apocalyptic vibes via these zombie titles instead.

Here are 10 zombie movies on Netflix in time for Halloween:

If you haven’t seen this global megahit from 2016, now’s the time. Mostly taking place on a high-speed train, this South Korean zombie film features a band of survivors making their way from Seoul to Busan and away from the horde of zombies getting bigger and bigger. Featuring fully-realized characters and inventive action in tight and claustrophobic spaces, this film was hailed as a thrilling and unique addition to the genre. It also stars some of South Korea’s biggest stars today such as Gong Yoo (Goblin) and Don Lee (Marvel’s Eternals).

Once you’re done with Train to Busan, try out its standalone sequel titled Peninsula. Directed by Train to Busan’s Yeon Sang Ho, Peninsula takes place four years after zombies take over South Korea. A former Marine captain (Gang Dong Won), guilty for events that happened during the start of the outbreak, is recruited by mobsters to retrieve a truck containing U.S. $20 million in the middle of a quarantined-off South Korea. While this film isn’t as fresh as its predecessor, it does still feature some great action, high-speed chases, and gives a gritty peek into what the world may look like years after a zombie invasion.

The trailer for The Dead Don’t Die boasts that this is “the greatest zombie cast ever disassembled” and just a quick look at the cast list, it’s hard to disagree. Starring Bill Murray, Adam Driver, Tilda Swinton, Chloë Sevigny, Steve Buscemi, Rosie Perez, Selena Gomez, and many more, The Dead Don’t Die features this all-star cast facing a sudden zombie invasion in their small town. Written and directed by Jim Jarmusch, this comedic zombie film blends tones and genres to create a strange and quirky entry into the zombie-movie pantheon full of deadpan humor and silly musings about the apocalypse.

While it was made pre-pandemic, the South Korean film does sort of capture those eerie feelings of dread and uncertainty at the very start of the pandemic, but it’s entertaining enough—with lots of exciting zombie action and at times even funny moments—and different enough from other zombie films. Yoo Ah In stars as a gaming live streamer who gets caught in the middle of a zombie outbreak, stuck in his apartment with nowhere to go. A man stuck in his apartment as a virus rampages the city outside might hit a little too close to home, but #Alive is well worth watching.

From Justice League and 300 director Zack Snyder, Army of the Dead takes place in a destroyed Las Vegas where zombies have taken over. Snyder is no stranger to the genre, having also directed 2004’s epic Dawn of the Dead remake. In this “spiritual sequel” to that film, the undead-infested Sin City is walled off from the rest of the world and is set to be nuked in days—with hundreds of millions of dollars just sitting inside casino vaults. A group of mercenaries, played by the likes of Dave Bautista, Ella Purnell, and Tig Notaro, infiltrate the closed-off zone to try and get the money, leading into an explosive and exciting zombie-meets-heist film featuring intelligent zombies and yes, undead tigers.

Resident Evil: The Final Chapter is reportedly the final installment in the Resident Evil film series directed by Paul W. S. Anderson and starring Milla Jovovich. Based on the popular video game series, Resident Evil: The Final Chapter is the sixth film in the franchise and stars Jovovich as Alice, a clone heading into a big final fight with the evil Umbrella Corporation, the company that created the virus that infected humanity and caused a zombie apocalypse.

Set during Mexico’s War of Independence against Spain, a gang of outlaws attempt to steal from a group of seemingly powerless and helpless sisters, only to discover terrifying and unimaginable hiding behind the walls of the sisters’ homes—zombies. Unlike other films on this list that feature massive, wide-scale zombie apocalypses, Ladronas de almas (roughly translated to Soul Robbers) is a small-scale zombie horror film for those looking for something a bit more intimate.

Pandemic was released back in 2016 but definitely feels like it could’ve been released today as a reflection of the events happening around us. Starring Rachel Nichols as a doctor leading a group of survivors (played by the likes of Alfie Allen, Mekhi Phifer, and Missi Pyle), this zombie movie is filmed in first-person POV style (almost as if you’re playing a first-person shooter videogame), giving viewers an up close and personal look at a zombie apocalypse. This storytelling device makes Pandemic a little more unique as compared to other films of the same genre.

An American remake of the terrifying Spanish film REC, Quarantine is a found-footage horror film where a reporter and her cameraman are stuck inside an apartment building where a rapidly mutating virus is infecting all the inhabitants. With no score or many big effects, focusing instead on atmosphere and tension, Quarantine really sets a creepy, scary tone while delivering lots of shocks throughout. Jennifer Carpenter stars in this claustrophobic, expertly staged horror ride that at the time felt very inventive, but today feels like a time capsule of the found-footage fever in the 2000s.

Kingdom is a South Korean zombie TV series on Netflix, with two seasons now available. After Season 2, the show released a special episode called Kingdom: Ashin of the North. While it's not technically a movie, this prequel to Kingdom runs at 93 minutes and goes on to tell a bloody, brutal tale of revenge as Ashin fights back at the people who killed her family. This prequel also gives fans a look at the origin of the zombie outbreak that’s taken over the world in Kingdom. While this special episode is definitely a significant part of the show and would delight fans, it also stands alone as a massive and cinematic zombie revenge thriller that unfamiliar viewers would still enjoy.