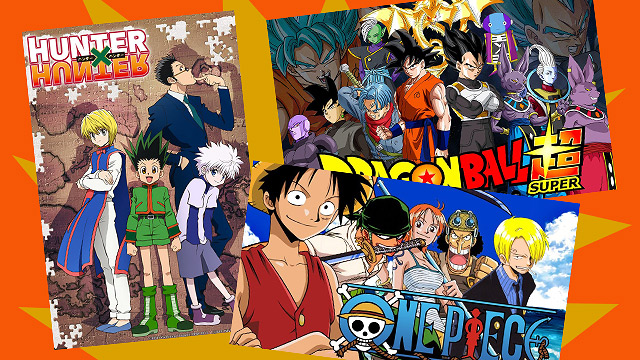 (SPOT.ph) Streaming service Viu is definitely top of mind for audiences looking for Korean dramas and variety shows, but over the years, it has expanded to cover more genres of Asian content, among them Southeast Asian dramas and anime. In particular, Viu’s anime collection is turning into a gold mine with new titles and '90s classics being added regularly. Big shows like My Hero Academia, Attack on Titan, and Haikyuu!! are all on their roster. Best part? You can stream them for free. Just note that you'll have to get a subscription to get rid of those pesky ads.

Also read: 10 Must-Watch Shows You Didn’t Know Were on Viu

Check out these Viu anime shows and add them to your to-watch list:

Detective Conan is a long-running anime series based on an ongoing manga series of the same name. It revolves around Kudo Shinichi, a talented high school detective who gets transformed into a child after getting force-fed poison by a crime syndicate. Shinichi takes on a new identity as Edogawa Conan and starts living with his friend, Ran, and her dad, Kogoro, who is a private detective. He uses his smarts to solve cases for Kogoro, but he never reveals himself, instead choosing to use a voice changer and make it seem like Kogoro is delivering his deductions. Viu currently covers seasons 14 onwards.

Hunter x Hunter is the anime adaptation of the manga of the same name, authored by Yoshihiro Togashi, creator of Yu Yu Hakusho (aka Ghost Fighter in the Philippines). There are two versions of the anime, one released in 1999 and another in 2011 (the latter version is the one available on Viu). It tells the story of Gon Freecs, a talented and cheerful young boy looking for his father, Ging, a powerful Hunter. Gon decides to become a Hunter himself and find his father. Along the way, he befriends three aspiring Hunters—Killua, Kurapika, and Leorio—who become his trusted allies. All seven anime arcs are available on Viu.

‘90s kids have all watched the widely popular anime series Dragon Ball Z, following Son Goku and his never-ending adventures fighting enemies trying to conquer Earth. The craze started with the original Dragon Ball series on RPN 9, but it was when Dragon Ball Z aired on GMA-7 in 1999 that it fueled even more local fervor. Almost all variations of the Dragon Ball franchise have aired on local TV including the movies. Dragon Ball Super follows Goku’s life after fighting Majin Buu, introducing audiences to Beerus, God of Destruction and the idea of the multiverse. A new Super movie is in the works for a 2022 release, but in the meantime, you can watch all 130 eps of the Dragon Ball Super anime on Viu.

This anime series is both action-packed and hilarious. After training so hard, Saitama, the show’s protagonist, can now knock out any enemy with just one punch, but because of how good he is, it’s hard for him to get a proper match. Despite his prowess, though, he remains an unknown hero with a low rank at the Hero Association, while his disciple, Genos, gets classified as top-tier. The series chronicles Saitama’s accidental good deeds and his search for an opponent that will finally make him sweat.

Fairy Tail is set in a world where magical guilds abound. Protagonist Natsu Dragneel is a Dragon Slayer looking for his adoptive father, the dragon Igneel. Along the way, he meets Lucy Heartfilia, a celestial wizard who gets her powers from magical keys. He asks her to join his guild, Fairy Tail, and together with the other guild members, they go on missions and take down baddies. The Viu episodes start from Season 7.

Kageyama Shigeo, aka Mob, is just your ordinary eighth grader—if by “ordinary,” you mean someone with powerful ESP. Mob has a blank expression on his face as he keeps his emotions in check to prevent his power from overflowing and hurting others. He also works for a psychic consultation service under his mentor, Reigen Arataka, who seems to know just the right things to say despite being a con artist (read: ordinary human). Despite not wanting to use his powers, Mob often gets into the strangest situations that stress him out and make him unleash them.

In this adventure fantasy anime, protagonist Asta is an orphan with no powers, living in a world where everyone can use Mana to perform magic. To combat his weakness, Asta improves his physical strength. He grows up with fellow orphan Yuno, a genius with wind power, who can perform great feats of magic with ease. The two orphans dream of becoming the next Wizard Emperor, forming a friendly rivalry between them as they join different Magic Knight squads and embark on their own journeys of growth. Viu has all seasons on their roster with the last season still incomplete.

Demon Slayer is arguably one of the hottest anime series in the world right now with both critical acclaim and a considerable audience base. It tells the story of Kamado Tanjiro who loses his family to a demon. He and his sister, Nezuko, are the only survivors, but complications arise when he realizes Nezuko has been turned into a demon. Tanjiro sets out to become a member of the Demon Slayer Corps to get revenge and turn Nezuko back into a human. When the anime’s first ever film adaptation, Demon Slayer – Kimetsu no Yaiba – The Movie: Mugen Train was released in 2020, it broke box office records and became the highest grossing anime film and Japanese film of all time.

One Piece is a legendary series based on the ongoing manga of the same name. The anime started in 1999. Its latest season, season 20, now airs on Viu. One Piece takes audiences on a wild ride with Monkey D. Luffy, its quirky protagonist with elastic powers. His dream is to find the treasure, One Piece, and become the King of the Pirates. With his crew, the Straw Hat Pirates, he goes on many adventures, making plenty of allies and enemies along the way.

The original Cells at Work! anime introduces audiences to anthropomorphic cells inside the human body, working hard to ensure it stays healthy. It’s fun and educational at the same time. CODE BLACK is a spinoff series set in the body of someone stressed with a lot of bad habits, making it a toxic workplace for the cells. Red Blood Cell AA2153 is an optimistic new hire who realizes belatedly that he works for an unhealthy body. As he falls into despair, he finds inspiration in White Blood Cell U-1196, who works tirelessly and silently despite their bad situation.