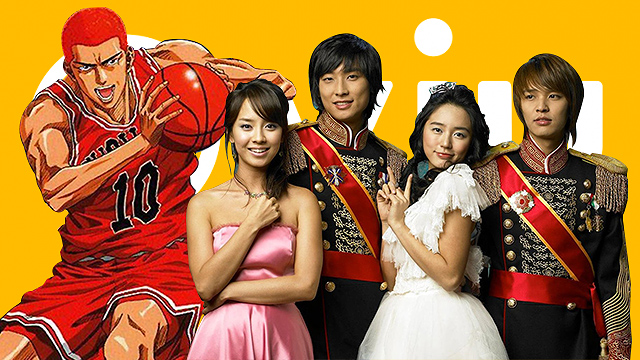 10 Must-Watch Shows You Didn’t Know Were on Viu

There's a whole slew of anime shows on the platform.

(SPOT.ph) Sometimes, you need a little variety in the shows you feed your inner couch potato. Viu is the go-to streaming service for the latest K-Dramas, but you’ll be surprised to find what other gems they have on their roster. The Viu series on this list cover different genres from Asian drama classics to anime hard-hitters, good for supplementing your newest K-Drama addiction.

Also read:
The Ultimate Subscription Guide: Which Streaming Service Should You Get?
10 Must-Watch Korean Movies You Probably Didn’t Know Are on Viu

Switch up your nighttime viewing routine with these Viu series:

Here’s a sports-anime classic every fan should watch—especially as we wait for the new movie to drop in 2022. A seamless fit for Filipinos and our love for basketball, Slam Dunk was popular with both kids and teens when it aired on local TV in the '90s. It tells the story of hot-headed high school delinquent Sakuragi Hanamichi who initially joins the Shohoku basketball team to impress his crush, Akagi Haruko. His rivalry with ace rookie Rukawa Kaede—Haruko’s crush—is legendary, but as the boys improve and start playing against other teams, Sakuragi becomes more engrossed in basketball and realizes how much he loves it.

Take a walk down memory lane with one of the first K-Drama series that started the Hallyu craze, Princess Hours. The show was a hit all over Asia, including the Philippines that it had everyone singing Rachelle Anne Go and Christian Bautista’s “Pag-Ibig Na Kaya,” the remake of “Perhaps Love” from the original drama OST. The drama’s premise revolves around Korea still being under a monarchy in modern times. Crown Prince Shin (Ju Ji Hoon) and commoner Chae Kyeong (Yoon Eun Hye) get married to honor an old arrangement, but as they get to know each other better, they start falling in love. Bonus: Running Man’s Song Ji Hyo is also in the cast as ballerina Hyo Rin.

If you’re a '90s baby, then you’re probably a fan of the OG anime show, which changed the landscape of magical girl anime. This shiny reboot was released on the series’ 20th anniversary. It follows the manga storyline and reintroduces us to ordinary teenage girl Usagi Tsukino who discovers she’s Sailor Moon, a Sailor Guardian tasked to find Princess Serenity and the Silver Crystal. Along with magical cat Luna, she hunts down the rest of the Sailor Guardians while defeating baddies. Things get complicated when she uncovers secrets to their past. This series has a lot of heart, just like the original, so don’t be surprised if it hits you in the feels.

If you love musicals, you’ll enjoy Dream High, Bae Suzy’s first foray into K-Dramas. Set in fictional Kirin High School, the drama follows the growth of six musician hopefuls as they struggle to prove themselves while also undergoing teen growing pains. Suzy plays aspiring opera singer Hyemi who turns to mainstream music to earn money. K-Pop lovers will recognize the stars in the cast, which include solo singer IU of Hotel del Luna fame and idols like Ok Taecyeon and Jang Wooyoung of 2PM. This was also the drama that catapulted Kim Soo Hyun to fame.

We all know A-list Korean star Park Seo Joon from his recent hits like Itaewon Class and What’s Wrong with Secretary Kim, but he already had the makings of a great actor back when he was still starting. Witch’s Romance was his first drama in a leading role, and while it didn’t break the ratings game in Korea, he was a revelation in it. He plays Dong Ha, a man in his 20s, working diligently as a runner for his own little errands shop. Sparks fly when he meets Ji Yeon (played by the iconic Uhm Jung Hwa, known as Korea’s Madonna), a successful woman in her late 30s who gets called “witch” by her colleagues. Their chemistry is scorching, and spoiler, they fall into bed way sooner than we thought they would.

This anime still has half of its final season unaired, but you can watch all the other eps that are out on Viu. A dark tale set after the apocalypse, Attack on Titan shows survivors living in walled cities, hiding from Titans, which are huge humanoid creatures that eat people. After his mother dies from a Titan attack, young Eren decides to join the Survey Corps, vowing revenge. He gets the surprise of his life when he discovers a big secret during training, but as the series goes along, he realizes that was just the tip of the iceberg. Attack on Titan is both critically-acclaimed and audience-approved. As of April 2021, it also holds the record for “Most In-Demand Anime TV Show,” according to Guiness World Records.

We haven’t found a series that gives us the same thrill as Haikyuu!!, a popular sports anime about young boys playing volleyball. It’s the perfect mix of reality, humor, and friendship. All the characters are lovable—including the guys on the rival teams. Protagonist Hinata Shoyou is a tiny ball of sunshine, and his goal is to become a great volleyball player despite his short height. The series follows him on his quest as he makes fast friends with the Karasuno volleyball team and forms a rivalry-slash-partnership with genius spiker Kageyama Tobio. Each arc brings new “enemies” as the boys enter tournaments, and you’ll feel a zing of satisfaction as you see them grow as players and as people.

If you’re ready to expand your Asian-drama repertoire, try Chinese dramas. My Amazing Boyfriend was a certified hit when it was released online, racking up over two billion views. It was touted as the Chinese equivalent of the K-Drama My Love from the Stars, but don’t let that fool you because only the premises are similar. In it, Tian Jing Zhi (Janice Wu) wakes superpowered mutant Xue Ling Qiao (Kim Tae Hwan) from a century of sleep after getting involved in a car accident. Ling Qiao ends up living with Jing Zhi, and hilarious situations occur as Ling Qiao tries to adjust to modern living. As their love-hate relationship evolves into something deeper, they discover they’re involved in a big conspiracy.

Originally launched as a web drama, Le Coupe de Foudre got over 100 million views on its first day alone. We love a good coming-of-age story, and this C-Drama is a great example of one being done well, offering a realistic but heartwarming picture of not just romance but friendship and family. It revolves around classmates Zhao Qiaoyi (Janice Wu) and Yan Mo (Zhang Yujian) who end up falling in love when Yan Mo starts tutoring Qiaoyi. The two promise to study abroad together, but an accident causes Qiaoyi to stay in China. Years later, they meet again. The two actors had such great chemistry on the show, and they recently confirmed that they’re married and have a daughter.

This hit superhero anime is great for viewers looking for a mix of lighthearted fun and deep themes. In a world where only people born with Quirks (a.k.a. superpowers) can become heroes, young Midoriya Izuku still dreams of being one despite being Quirkless. One day, his lifelong idol, the hero All Might, chooses Midoriya to inherit his Quirk, “One for All.” Suddenly, Midoriya has the means to realize his dream. Season 3 sees him still enrolled in U.A. High School, embarking on an exciting journey of growth and training with his classmates—including his childhood frenemy, the volatile Bakugo Katsuki.

Adventurer Savvy Seasoned Viu Streaming Services My Hero Academia Le Coup De Foudre My Amazing Boyfriend Haikyuu Attack On Titan Witchs Romance Dream High Pretty Guardian Sailor Moon Crystal Princess Hours Slam Dunk Guide Greener
Your Guide to Thriving in This Strange New World
Staying
In? What to watch, what to eat, and where to shop from home
OR
Heading
Out? What you need to know to stay safe when heading out