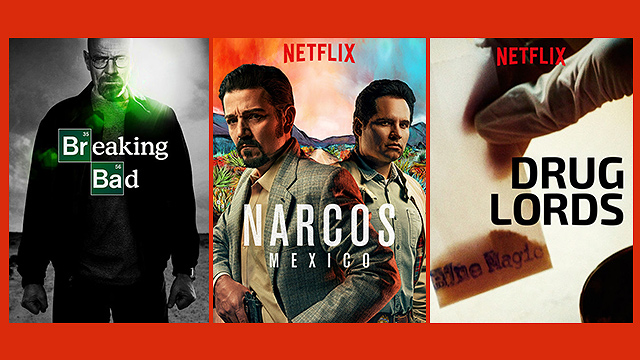 10 Drug-Related Crime Shows You Can Stream on Netflix

From a documentary about the infamous Pablo Escobar to a French heist series.

(SPOT.ph) The United Nations Office on Drugs and Crime reported in June 2021 that there is an increasing trend of drug abuse in low-income countries, citing that numbers can increase by up to 43% in 2030. But this worldwide drug problem is much more than the stereotype of a user commiting crimes while high as a kite. This particularly nuanced issue is within a larger picture that's affected by economics, politics, and health. While there are a number of graphs and reports to explain all these things to us, there are also documentaries and fictionalized series that talk about the illegal drug trade.

Also read:
Netflix Shows That May or May Not Change Your Stand On Death Penalty
10 Thrilling True-Crime Documentaries You Can Stream on Netflix

Check out these crime series on Netflix that show the gritty world of narcotics and drug cartels across the globe:

Science meets crime in this series by Vince Gilligan. First making waves in the late 2000s, Breaking Bad captured the audience's attention in its anti-hero portrayal of one high school chemistry teacher (Bryan Cranston as Walter White), who turns to a life of crime in order to secure his family's finances before he dies of cancer. He produces crystal meth (all through his chemistry background, of course) and partners with his former student Jesse Pinkman (Aaron Paul)

Narcos is loosely based on the life story of Pablo Emilio Escobar Gaviria (Wagner Moura), founder of the infamous drug cartel in the city of Medellín in Colombia. Narrated by American Drug Enforcement Administration agent Steve Murphy (Boyd Holbrook), it starts with how the drug kingpin first manufactured cocaine in the late 1970s. The series follows a chronological order and ends the third season with a plot twist following the death of Escobar.

If Pablo Escobar has the Medellín Cartel in Colombia, Joaquín "El Chapo" Guzmán has the Sinaloa Cartel in Mexico. El Chapo, which is co-produced by Netflix, recounts the life story of the drug lord, starting from his humble beginnings as a low-ranking member of the Guadalajara Cartel. The title character in the three-season series is played by Marco de la O.

In four episodes, documentary series Narcoworld: Dope Stories reveals the ins and outs of the drug world. It is told through first-hand accounts by people involved in the global drug trade as well as those on the side of law enforcement.

Another docu series, The Business of Drugs not only shows the gritty world of drug distribution, but also the economics behind this thriving business. Former CIA analyst Amaryllis Fox—in six episodes—investigates the business side of manufacturing and distributing cocaine, synthetics, heroin, meth, cannabis, and opiods.

French television series Ganglands dropped on Netflix in September 2021. It follows professional heist mastermind Mehdi (Sami Bouajila), who's pulled into a deadly turf war against the gang of fellow thief but less skilled Liana (Tracy Gotoas). Drug trafficking is just one of the many conflicts of this gritty crime drama.

Netflix docu-series Drug Lords tells the story of eight of the world's biggest drug kingpins. The first season features Pablo Escobar's cocaine kingdom in Colombia; Gilberto and Miguel Rodríguez Orejuela of the Cali Cartel in southern Colombia, Frank Lucas' heroin trade in New York, and Pettingill Clan's rule in the Australian underworld. The second season, on the other hand, has episodes about El Chapo, Jemeker Thompson as the crack queen of Los Angeles, Christopher Coke's narco business in Jamaica, and Klaas Bruinsma's drug cartel in Europe. All tales are told through interviews from law officers, gang members, and journalists that have been following these drug-crime cases.

Docu-series Dope has the makings of your usual true-crime shows, shaky camera and all. Every episode zooms in on the rising cases of drug use in different neighborhoods in the United States, including cocaine distribution in California, the heroin epidemic in areas like Baltimore, and crack cocaine deals in Chicago. There are also episodes on drug trafficking routes from South America to Florida and operations of the Sinalo Cartel from Mexico to the U.S.

With Narcos set in Colombia, Narcos: Mexico is set in, well, Mexico. It is loosely based on the rise of the Guadalajara Cartel in the 1980s and the infamous drug empire of Miguel Ángel Félix Gallardo (Diego Luna). Like Narcos, Narcos: Mexico is told from the pespective of a  Drug Enforcement Administration agent, this time Kiki Camarena (Michael Peña).

The only Filipino creation in this list is an iWant Original, originally released through the ABS-CBN streaming service in 2019 then later dropped on Netflix in July 2021. Bagman follows the story of Benjo (Arjo Atayde), a neighborhood barber, who lands a job as the governor's henchman, then later, becomes the governer himself. He gets caught up in the dangerous world of drug trafficking, politics, and corruption along the way. Sound familiar?