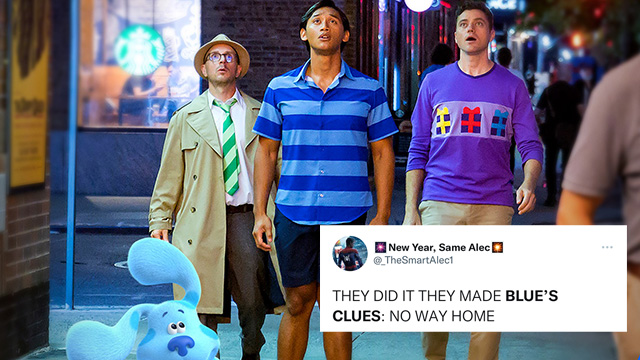 What Year Is It? Blue's Clues Is Getting the Movie Reunion It Deserves

(SPOT.ph) "After all these years, I never forgot you. Ever." This is what Steve Burns, former host of children's show Blue's Clues said in September 2021 when he appeared on a Nick Jr. video for the series' 25th anniversary. In it, Burns, clad in his signature striped green shirt, addressed the kids (now adults) who grew up watching the show and were crushed by his sudden departure from the series in 2002, six years after it originally premiered. To say this video emotionally destroyed an entire generation of TV fans would be putting it milldly—it was closure to a relationship that many of us had long left in the past, but one that we (apparently) desperately needed.

Also read:
Then and Now: Steve From Blue's Clues

Following the viral video, millennials across the world took to the Internet to express their appreciation for a show that played a big part in their childhoods. Now, it looks like the renewed interest in the series has reached a new peak: Today, February 16, Nick Jr. announced the upcoming premiere of a Blue’s Clues movie entitled Blue’s Big City Adventure, which is set to release on Paramount+ this 2022. Alongside OG host Burns are his successor Joe (Donovan Patton) and the host of the revival series Blue’s Clues & You!, Josh (Josh Dela Cruz). That's right folks: the Blue's Clues Cinematic Universe is coming.

Not much has been said about the movie, but the photo from Paramount+ shows the three hosts all together along with the animated Blue walking a city street, gazing up at a seemingly shocking sight—could it be the Blue’s biggest mystery yet? According to ScreenRant, the film will reportedly feature Blue and Josh heading to New York City to audition for a Broadway musical with Steve and Joe coming along to help out.

The Twitterverse been quick to compare the upcoming film to 2021's Spider-Man: No Way Home, which similarly brought together three generations of Spider-Man actors. Whether or not Steve and Joe will be arriving due to an error in the multiverse is unclear, but hey, we wouldn't be against it.

Here's how folks on Twitter are reacting to the announcement of a new Blue's Clues movie:

ScreenRant also notes that the hosts have performed together before—Burns and Patton had previously made appearances on Blue's Clues & You! and all three performed together at the 95th Macy's Thanksgiving Day Parade in 2021. Blue's Big City Adventure is also not the first Blue's Clues movie to exist—the direct-to-video Blue's Big Musical Movie was released in 2000. "However, this new film appears to be breaking the traditional format of the series, taking Blue into a more realistic world as opposed to the storybook images of the series, implying a much larger scale project," they said.

No word yet on whether we'll be able to (legally) watch the upcoming Blue's Clues movie in the Philippines, but we'll be keeping our fingers crossed for now.