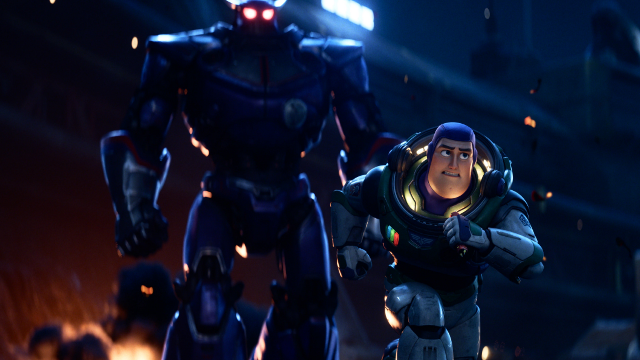 (SPOT.ph) Well, Woody is definitely wrong. The word he’s searching for is “Space Ranger”. Pixar has dropped a new, full-length trailer for Lightyear jampacked with hostile planets, evil robots, and hyperspace travel that proves once and for all Buzz Lightyear is not a toy.

The new trailer gives us a clear idea of what’s going in Buzz Lightyear’s “definitive origin story”. Buzz (Chris Evans) appears to be lost in space and time, as he’s marooned on a distant planet and separated from Star Command. In his attempts to get back to home in his time, he enlists the help of inexperienced cadets and also encounters the might of Emperor Zurg (James Brolin).

We get our first good look at Zurg, Buzz Lightyear’s archnemesis introduced in Toy Story 2, and his army of robots. The depiction of Zurg mostly lines up with how he was depicted in the opening scene of Toy Story 2. Zurg even has his instantly recognizable three-barrel ion blaster. The film’s synopsis teases there’s more mystery behind Zurg in Lightyear, which could be referencing the plot twist of Zurg being Buzz’s father, which Toy Story 2 jokingly included as an homage to Darth Vader and Luke Skywalker.

The film is set in the Toy Story universe, but for all those wondering: no, there are no real-life aliens and intergalactic threats battling it out in that universe. The film’s writer and director Angus MacLane stated in a recent interview that Lightyear is essentially the “movie that Andy saw that changed his life,” and compared it to his own experiences with the space opera Star Wars.

Place your bets now whether Lightyear ends with the credits rolling as the camera pans to a young Andy sitting in awe of what he has just watched. We wouldn’t be surprised, because Lightyear so far looks like the space adventure flick that’d ignite any kid’s imagination.

Lightyear drops in cinemas on June 17.