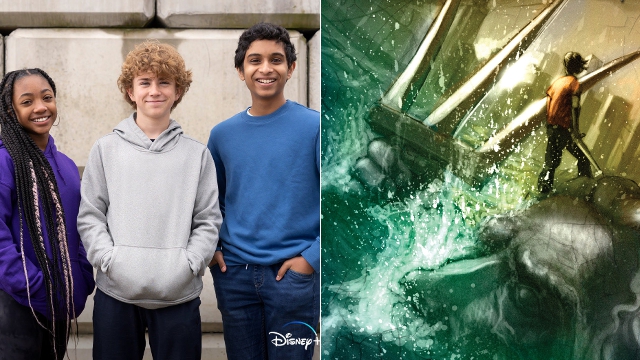 LOOK: The Percy Jackson Trio Has Been Revealed and We Are Here For It

Can Logan Lerman show up as Poseidon?

(SPOT.ph) It’s been a long time coming for Percy Jackson fans, but it looks like we’re finally getting an adaptation that lives up to the beloved original book series. It’s been known for a while that series author Rick Riordan himself is developing the series for the streaming service Disney+, but now we finally get a look at who will be the faces of the upcoming series.

After Walker Scobell was announced as Percy Jackson a little under a month ago, Riordan and co. now reveal that the two playing Percy’s best friends are Leah Jeffries as Annabeth Chase and Aryan Simhadri as Grover Underwood.

Also read: Here's Everything You Should Know About the New Percy Jackson TV Series

Grover is Percy’s best friend who reveals himself to be the demigod’s protector when Percy learns that he’s the son of Poseidon. He’s a satyr (top-half: human, bottom-half: goat) from Greek mythology and also a source of comic relief in the series. Meanwhile, Annabeth is a demigod as well, being the daughter of Athena. She’s initially a tough mentor figure to Percy, but soon develops a soft spot for him.

Expected to drop sometime in late 2024, the Disney+ series follows an unsuccessful attempt at a feature film adaptation of the series from 20th Century Fox. The studio produced two films based off the first two books in the early 2010’s, but they weren't a hit with most audiences and also failed to appeal to long-time fans of the series due to inconsistencies with the source material.

This series, however, is shaping up to be a more faithful adaptation of the book series, as Riordan is directly involved in the project this time around. The series’ leads are all quite young compared to the leading trio of the previous film adaptations (Logan Lerman, Alexandra Daddario, and Brandon T. Jackson), but that’s due to the characters canonically being around 12 years old. Plus, hopefully this means the actors stick around long enough to give us a “Heroes of Olympus” sequel series. Fingers crossed.

The first season will be an adaptation of the first book of the series, The Lightning Thief, wherein Percy finds out he is a demigod—only to discover the whole Greek world suspects him of stealing Zeus’ lightning bolt. Percy, alongside Grover and Annabeth, then must journey across North America to find the actual thief and prevent all-out war between the gods.

With the main three leads cast, we’re looking forward to see who they cast for the other prominent roles and if they’ll cast any big-time celebrities. We could definitely see an A-lister coming on to take on the villainous roles of Hades, Ares, and Medusa. Or, now that they’re a bit older, will they bring back Lerman or Daddario to play Poseidon or Athena? We definitely wouldn’t mind seeing Lerman rock the dad beard.