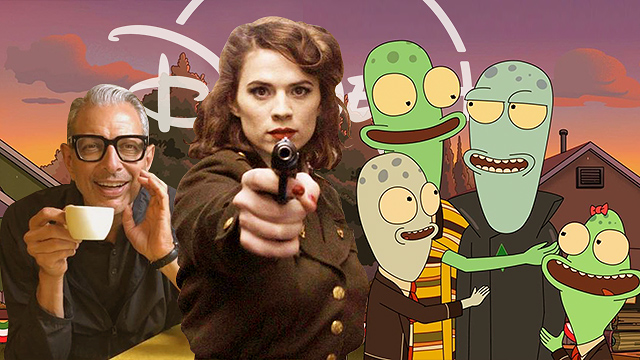 10 Lesser-Known Disney+ Series That Are Giving Us Major FOMO

There's way more than Marvel or Star Wars stuff to check out.

(SPOT.ph) We don’t know who needs to know this, but our ASEAN neighbors Singapore, Malaysia, Indonesia, and Thailand already have Disney+ on their shores. Meanwhile, the platform is scheduled to launch in Hong Kong and Taiwan in November. The FOMO has never hit harder. If you’re in the mood for a bit of torture—or want to know what next to VPN (let's be honest)—we round up some of the coolest, lesser-known series available on Disney+ below! We’re sure you’ve heard of all the big Marvel series and Star Wars ones, but there’s a lot more on the platform.

We wish we could easily watch these cool Disney+ series:

What if Agent Carter had been given the Super-Soldier formula instead of Steve Rogers? That is just one of the many different alternate realities presented in this animated anthology series. With a total of nine episodes, each one dives into a different type of “What if?” in the Marvel Cinematic Universe. Above it all, quite literally, is Uatu (voiced by Jeffery Wright), one of the Watchers, an advanced alien race. And with a voice cast that includes Josh Brolin, Chris Hemsworth, Tom Hiddleston, Natalie Portman, Hayley Atwell, Jeremy Renner, Mark Ruffalo, Paul Rudd, Sebastian Stan, Taika Waititi, and the late Chadwick Boseman, it’s every MCU multiverse fan’s dream.

Over all the childhood cartoons on Disney+? How about an adult one instead, specifically one from Mike McMahan and Rick and Morty co-creator Justin Roiland? Yup, this time instead of a wacky human family, this cartoon focuses on a crazy alien one. This bunch of aliens have landed on Earth and end up living in the U.S.—whether this is a good or a bad thing is something they can’t seem to agree on.

Nostalgia is one of the biggest themes of shows on Disney+. It has all the childhood faves, and from different generations to boot: from the 1981 Spider-Man series to the Suite Life of Zack & Cody. In case you were looking for some “new” nostalgia, check out the '90s series Boy Meets World. This U.S. cult-classic sitcom follows besties Cory (Ben Savage) and Shawn (Rider Strong), along with Cory’s girlfriend Topanga (Danielle Fishel) as they go through middle school all the way to college. The show lasted seven seasons and was one of those sitcoms that managed to balance humor and reality well

We managed to join Cap Rogers and his fight in the Infinity War, but did you ever wonder what Agent Carter (Hayley Atwell) got up to in that time? Well, the badass agent did really well for herself too, as this series proves. This hilarious series dives into how she struggles to balance being a single lady in the 1940s U.S. and being, well, a kickass agent. The first season pairs her up with Edwin Jarvis (James D’Arcy), as in the OG J.A.R.V.I.S. of the Starks, as they try to help Howard Stark (Dominic Cooper), as in Tony’s dad Howard, find out who has been dealing in the illegal weapons trade under his name. Disclaimer: Though the series gained a cult following, the big people still decided to cut it at the second season, so prepare your hearts.

If you’ve ever wondered just how big the impact of the Marvel Universe is, then this docuseries will take you through just some of the ways it has influenced the real world. Each of the eight episodes had different directors and explored things such as the Japanese Spider-Man, obscure Marvel characters, cosplay, and more. Plus, Community’s Alison Brie and Gillian Jacobs each directed an episode! Fun fact: 616 is the number used to refer to the regular universe the Marvel comics occupy.

“The happiest place on earth” didn’t just pop out of nowhere. Disneyland enthusiasts will be happy to know that there’s a whole docuseries about the magic—and many processes—that goes into building one of Disney’s amusement parks. The six episodes dive into everything from the creation of the first Disneyland, the goings-on at the company itself, how the rides are made or revamped, and they even cover the Disney Cruise Line!

Hey, we are talking about Disney+ so there’s no way we can’t not include a kid’s cartoon. Aside from revisiting all your childhood classics, how about checking out this 2017 remake of an '80s classic? Remember Huey, Dewey, and Louie, nephews of the Scrooge McDuck? Yup, they’re back in an updated version! In this one, grumpy old Scrooge is left in charge of the three young brothers—who promptly turn his world upside down. They fight bad guys, go on treasure-chasing adventures, and wreak havoc in McDuck Manor. The show is peppered with hilarious pop-culture references, and the voice cast includes Community’s Danny Pudi as Huey!

Diary of a Future President

Fact: All leaders of any nation were at one point “just” a kid. We use “just” very loosely here, especially in the case of Elena (Gina Rodriguez), the President of the U.S. in this series. We join her path as a young Cuban American girl who dreams of becoming the top official—but has to face school and family life first. The show is narrated through the stories in her old diaries; it is a feel-good series at heart but also does a great job of exploring the reality of the issues she faces growing up.

The World According to Jeff Goldblum

Ever wanted to see things through Jeff Goldblum’s eyes? This docu-series developed by National Geographic will allow exactly that. The actor does pretty much what the title says in the span of 10 episodes: exploring the world and taking you along for the ride. Think of it as like a travel series but instead of places, Goldblum explores things like sneakers, ice cream, tattoos, and more.

The aughts’ classic High School Musical movies have pretty much spawned its own mega-franchise, this hilariously self-aware mockumentary included. When a new drama teacher at the high school where HSM was shot realizes they had never staged an HSM musical at said school, she, of course, decides to stage one! What follows next is a Glee-ful (get it?) attempt at recreating the HSM magic complete with teenage obstacles. And yup, this series is where Olivia Rodrigo—who plays Nini, the Gabriella Montez star—first came to the spotlight!