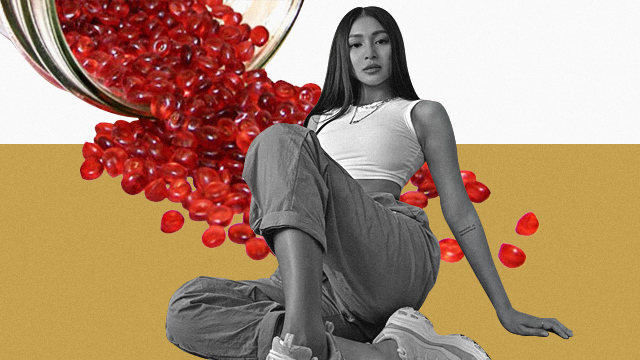 Kisses, Pokémon + Nadine Lustre: How the President Fell for This Childhood "Scam"

Still don't know what those strange beads actually were?

(SPOT.ph) Today in "Stars, They're Just Like Us!" news: Turns out Nadine Lustre, the unofficial president of the Philippines, also fell for those darn Kisses every Pinoy kid believed would magically multiply. Lustre dropped some good vibes via her IG stories today, September 2, when she brought up a Twitter thread of someone who appears to be an elementary classmate—that she apparently sold Kisses to on the pretense that they would turn into actual, legit Pokémon.

"Nadine! Those kisses never turned to Blastoise!" tweeted @Paolothehuman. And it seems he never got to tell Lustre just that."Would love to see her in person after so many years pero feeling ko malabo na ['yon]," they wrote, saying that the two eventually lost contact. "At malabo ko na [siya] masingil [doon] sa kisses," he cheekily added.

Somehow, Lustre caught wind of the story—leading us to hope that she has a secret Twitter account, but that's another story—and explained herself on IG. And it looks like they were both scammed by the strange beads! "In my defense..." she posted, adding all the crazy ways those kisses were supposed to multiply—from wrapping the beads in cotton, adding baby powder and soaking them in alcohol, to keeping them in a dark spot. "The ates in Divisoria who sold it told me they were Pokémon," she said. "Found out in Grade 6 that they were mf candle wax." (Censoring the bad word for the youngsters on social media, probably).

We can't get over the imagery of a wide-eyed and young Lustre totally falling for the marketing ploy of the famed "Ates in Divisoria." Plus, she's happy about another thing, too. "Good to know I'm not the only one who was scammed by this," she added, followed by a face-with-tears-of-joy emoji.

So what were those Kisses that had everyone saving up their baon? Turns out they were "aroma beads". The little beads were used mostly for ornamental purposes and to freshen up the space with its fragrance. While they have their own nice scent, you're meant to put them in fragrant oil to allow them to soak it up—and grow larger, not multiply!—then let the nice smell evaporate into the air.

Meanwhile, Twitter can't get over the cute little story. Who would have thought the President was one heck of an entrepreneur so early on?

A feel-good moment we all need.

We smell an opportunity!

Thank you, Ates of Divisoria, for making us believe in the impossible.

It's a very unique special power.

Good morning to you too.

A message from the OP!

Adventurer Savvy Nadine Lustre Kisses Nostalgia News Trending Twitter Reactions
Your Guide to Thriving in This Strange New World
Staying
In? What to watch, what to eat, and where to shop from home
OR
Heading
Out? What you need to know to stay safe when heading out