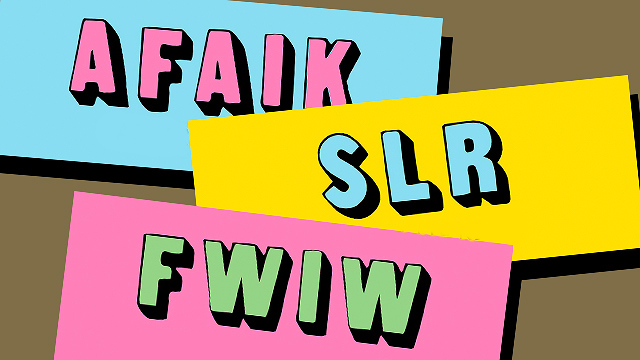 After ASL and LOL: 10 Acronyms the Kids Are Using These Days

(SPOT.ph) Back in the days of texting and chat rooms, shortening your words and phrases was important because of two things: character limit and typing speed. People would type ASL to ask for a possible chat mate’s age, sex, and location. If you don’t like the person’s answer on the other end, at least you didn’t waste your time and energy typing three words (four, if you count the conjunction). There’s also LOL or ROFL to express just how hard the person made you laugh without having to go into detail.

But as a form of language (albeit unofficial), Internet acronyms also evolve as the generation using it also changes. If you need to catch up on what the GenZers are saying these days, we round up some of the popular acronyms we commonly see online.

Check out these 10 Internet acronyms you need to know right now:

What it means: as far as I know

You start your sentence with AFAIK to express an opinion or state a fact that’s solely based on what you know. It may or may not be true, thus the disclaimer.

What it means: for real

What it means: sorry, late reply

Nope, it doesn’t mean a single-lens reflex camera as we first thought. SLR is often said as an apology for replying to a text or a message so late. We are in the age of instant messaging, after all, and that apparently warrants an instant reply.

What it means: hit me up

HMU is a request for a social invitation, as in “hit me up if you’re having a party,” where “hit me up” means “text me” or “call me.” HMU can sometimes mean “hook me up,” which means to connect the person to someone or something of interest.

What it means: for what it's worth

Like AFAIK, FWIW is said as a disclaimer if the speaker isn't sure if what they're going to say next is helpful. It also somehow waters down what’s possibly a bold statement so as not to sound too arrogant.

What it means: in my opinion

IMO can also be written as IMHO, which means “in my honest opinion.” Both acronyms indicate that what you’re about to say is based only on your opinion, and must be taken with a grain of salt. They’re disclaimers, similar to FWIW and AFAIK.

What it means: I guess

Not to be confused with IG as in Instagram, IG as in “I guess” is said when you’re in agreement to what’s just been said by another person. If IG were an emoji, it’s that one with shoulders and hands raised as in a shrug. It’s also used to imply reluctance or uncertainty in agreeing; or when you want to say “no,” but are too polite to say so.

What it means: shake my head or shaking my head

Rather than use a GIF or an emoji, people just type SMH to indicate the gesture of shaking one’s head because of disappointment or disbelief over something stupid. It can also stand for “so much hell,” as in the opposite of “so much love” or SML. For this one, you may have to figure out which one’s being used through the context of the conversation.

If you’re about to offer an unsolicited anecdote or share a personal story just out of the blue, you may want to start off with SKL. The Taglish phrase lets you off the hook in having to ease in your very random statement into a conversation.

What it means: as hell

ASL has evolved from its old-school chatroom meaning “age/sex/location” to the very GenZ expression “as hell.” It is usually added to the end of the sentence for emphasis, like “It’s hot asl” or “I’m furious asl.”

Internet Adventurer Savvy Seasoned Genz Online Terms Staying In
Your Guide to Thriving in This Strange New World
Staying
In? What to watch, what to eat, and where to shop from home
OR
Heading
Out? What you need to know to stay safe when heading out