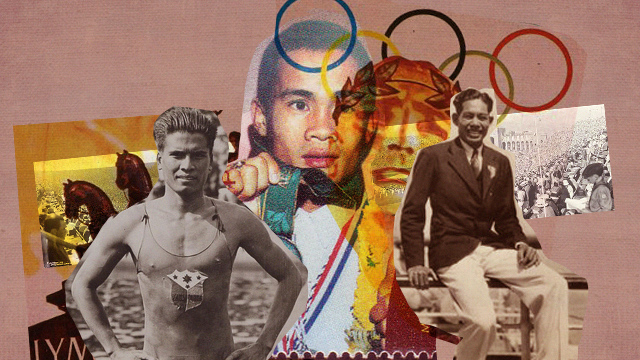 They've each brought home a medal or two.

(SPOT.ph) The Olympics are arguably the most prestigious sporting tournament in the world. With a history that dates back almost three millennia to Athens, Greece, the games decide the who’s who in the world of sports—not to mention the matter of national pride and honor being on the line. The Philippines has participated in the Olympics since the early 20th century and we’ve collected a total of nine medals from the Summer games. Plus, we’ve also got a medal from the Youth Olympics, rounding up the total to a clean cut 10. We’ve yet to strike gold in the Olympics, but in case you’ve ever wondered who are the athletes that have scraped up some precious metal for the country, we round up just some of the names you should remember.

Here are 10 Filipino Olympians who brought home a medal (or two):

Lovingly called the “Ilocano Shark,” this swimmer is the first Filipino to win a medal from the Olympic Games—and is also the only Filipino athlete with two to their name. The Olympian was a back-to-back bronze medalist for the men’s 200-meter breaststroke at the 1928 Summer Olympics in Amsterdam and the 1932 run in Los Angeles. Ydelfonso, who was orphaned at a young age, reportedly taught himself to swim in the Guisit River near his home in Piddig, Ilocos Norte.

An enlisted personnel of the Philippine Scouts, Yldefonso was forced to join the Bataan Death March in 1942, and ultimately perished in a concentration camp in Capas, Tarlac. It is said that a Japanese soldier, who knew of Yldefonso’s athletic feats, offered to release him, but the swimmer chose to stay with his men.

Toribio was a proud Boholano who represented the country for the men’s high jump event at the 1928, 1932, and 1936 Summer Olympics. It was at the 1932 Olympics in Los Angeles that he won a bronze medal—although there are some whispers that he could have struck gold had it not been for an unfortunate call of nature at the worst possible time. Despite settling for third place in the Olympics, Toribio was the undisputed champion at the Far Eastern Games (today’s Asian Games), winning gold from 1291 to 1934.

Toribio narrowly escaped capture by Japanese forces—thanks, in part, to the prestige of his being an athlete—and went on to become a lawyer and politician. An alumnus of the Silliman University, he was the Representative of Bohol from 1941 to 1953, and passed away in 1969.

Boxer Jose “Cely” Villanueva earned a bronze win in the men’s bantamweight class during the 1932 Olympics, rounding out a total of three medals for that year—a feat we’re yet to repeat for the prestigious international meet. Binondo-born Villanueva fought his way to the first-ever boxing medal of the Philippines in what was just the start of our winning streak.

Villanueva went on to train some of our country’s boxing greats, including Gabriel “Flash” Elorde and his son, Anthony Villanueva, whose name you ought to remember, too, for reasons you’ll see in just a bit. In a bittersweet turn of events, the elder Villanueva passed away after suffering a heart attack, reportedly while watching the famous bout between legendary boxers Sugar Ray Leonard and Roberto Durán.

Standing at a proud five-foot-11 inches, hurdler Miguel White was born to a Filipino mother and an American father. He took home a bronze medal for the Men’s 400-meter hurdle at the 1936 Olympics in Berlin—yes, the one with Hitler—and almost slid into second place, had Canadian Jon Loaring not bested his time by a tenth of a second. White clocked in at 52.8, a mere moment slower than Loarings’s 52.7 seconds.

White also joined the Far Eastern games, earning a bronze medal in 1930 and striking gold in 1934. The Olympian enlisted in the Philippine army sometime after his triumphant return from the 1936 Olympics and is believed to have been killed in action during World War II. He was a Lieutenant in the 52nd Infantry Regiment.

For nearly three decades after White brought home a bronze medal, the Philippines suffered a drought—until boxer Anthony Villanueva ended it with a shiny, silver one. The son of the Olympics' original boxing medalist Jose Villanueva, Anthony settled for second place after being beaten by Russian Stanislav Stepashkin in a controversial 3-2 score that, some say, should have been the country’s first gold.

Villanueva’s grand triumph at the Olympics gave him a short 15 minutes of fame, with a hero’s welcome and even a stint in local movies. But Villanueva eventually fell into obscurity—and the first athlete to ever bring home an Olympic silver medal died quietly in 2014, after having been bedridden for two years.

Another two decades of drought was ended by boxer Leopoldo Serantes with a bronze medal in the light flyweight division. Serantes’ victory is sandwiched between the Villanueva father-and-son duo and the incoming Velasco brothers, which may explain why his no-less-momentous win is often overlooked. The boxer proved his prowess by ending two of his four Olympic bouts via “referee stopped contest” result, a.k.a. the equivalent of a technical knockout in professional boxing, before bowing out to Bulgaria’s Ismail Mustafov.

Serantes, much like Villanueva, also faded to the background upon his return to the Philippines. He was diagnosed with chronic obstructive pulmonary disease and reportedly “turned over” his bronze medal to the Philippine Sports Commission for P30,000. The boxer was thankfully the first beneficiary of the Anthony Villanueva Trust Fund, a project started in honor of the forgotten Villanueva.

Before the younger Mansueto “Onyok” Velasco came punching into the global stage, his brother Roel also snatched a bronze medal in the 1992 Olympics in Barcelona. The elder Velasco reportedly edged out Onyok for the spot on the official representatives list, and won three straight decision victories before being beaten at the semi-finals by Cuba’s Rogelio Marcelo in a “referee stops contest” victory.

Roel Velasco would go on to win several more medals in global competitions. He earned silver in the 1997 World Championships and was also the first Filipino in the Goodwill Games. Velasco is still very active in the boxing scene, and coached the Philippine boxing team for the 2019 Southeast Asian Games.

Onyok Velasco cemented our winning streak in boxing with a controversial slide into second place at the 1996 Olympics. Dubbed as the “robbery in Atlanta,” his bout against Daniel Petrov Bojilov ended with a 6-19 score in favor of the Bulgarian—in a decision that the entire country is still yet to come to terms with. Onyok was a clear favorite, with his lightning reflexes and solid punches matched by his extreme charisma, the nation felt the gold medal could have—should have—fallen into his hands.

Onyok was given a grand hero’s welcome upon his return, and was also promised a P2.5 million incentive by the government. A decade later, reports turned up saying that the silver medalist is yet to receive the reward in full—we’re not so sure what happened there, but we can only hope Onyok has gotten what was promised.

After another two decades with no medals, weightlifter Hidilyn Diaz broke the dry spell with the Philippines’ very first Olympic medal in weightlifting. She hoisted her way to second place with a total combined weight of 200 kilograms in the 2016 Rio Olympics Women’s 53-kilogram division. It was her third attempt for the Olympic podium after having competed for the 58-kilogram category in both the 2008 and 2012 Olympics.

The weightlifter continued her medal sweep with a gold in the 2018 Asian Games, and most recently, another gold in the 30th Southeast Asian (SEA) Games. Diaz has been racking up medals left and right, but the weightlifter now has her eyes set on the 2020 Olympics in Tokyo—with our country’s first-ever gold as the ultimate bullseye.

The Youth Olympics had its first run in 2010 with athletes aged 15 to 18 from all over the world competing for the podium. In the 2018 Buenos Aires run, Filipino-Norwegian Christian Tio snatched our very first Youth Olympics medal: a shiny silver medal in the kiteboarding competition. The then 17-year-old was the sole representative from the Asia and Oceania regions.

Tio was taught how to kiteboard by his mother at just seven years old, and was supposed to train for the Olympics in his hometown of Boracay–but was not able to due to the island’s rehabilitation at the time. Despite the setback, the Red Bull athlete still managed to snatch a silver for the Philippines, and, because kiteboarding is off the Tokyo 2020 Summer Games charts, is aiming to win more medals in the Paris 2024 run.