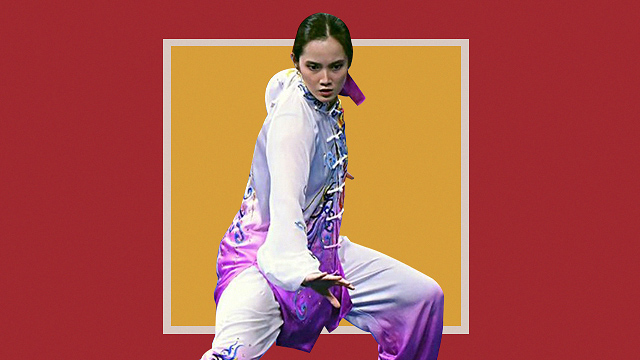 10 Pinay Athletes to Keep on Your Radar

They give "run like a girl" a whole new meaning.

(SPOT.ph) If anybody’s ever told you that you run like a girl, then we suggest you show them how well you can hit, too. Jokes aside, the phrase “like a girl” has slowly changed meaning through the years—and we’re all for it. To celebrate women’s month this March, we round up just a few of today’s Pinay athletes that prove moving like a girl means moving like a champion. From Olympic silver-medalist Hidilyn Diaz to taekwondo rising star Pauline Lopez and more, these athletes are carving out a space for their own names in both the local and international sports arena.

Here are 10 Pinay athletes that deserve your attention:

We’re sure you’ve heard this name before. Diaz took home a silver medal for weightlifting during the 2016 Rio Olympics, thereby ending a two-decade long medal drought for the nation. The last Filipino to do so was boxer Onyok Velasco at the 1996 Atlanta Olympics. In addition to her Olympic silver, she also struck gold during the 2019 Southeast Asian Games where she lifted a total of 211 kilograms. Now all eyes are on her as she vies for a spot at the 2020 Tokyo Olympics—and, quite possibly, the Philippines’ first-ever Olympic gold medal.

No athlete can make climbing the ranks at an international arena look as cool as Didal. This Cebu-native took the skateboarding world by storm when she quite literally rolled to the top of the podium at the 2018 Asian Games—and at just 18 years old at the time. She promptly landed on Time's list of influential teenagers that year. As of writing, she ranks 18th in the global list of female street skateboarders.

You might have first heard of Knott when she broke records during the Southeast Asian (SEA) Games for the 200-meter dash. The Filipino-American sprinter clocked in at 23.07, surpassing the 23.30 record of Thai Supavadee Khawpeag set in 2001—and Lydia de Vega’s legendary mark of 23.35 seconds set in 1986. While she snatched gold for the 200-meter dash, Knott had to settle for silver at the 100-meter event when she lost by .01 seconds to Vietnamese Tu Chinh Le. We’ve got a feeling the 24-year-old will be back soon!

Hailing from Santa Rosa, Laguna, this 28-year-old triathlete dominated during the 2019 SEA Games alongside teammate Kim Kilgroe. She managed to snatch the gold and has been on the international radar ever since—taking a path that started with her joining triathlons since she was 12 years old and might lead to Tokyo 2020. As of December 2019, Mangrobang ranked 13th in Asia and has been climbing the rungs to qualify for an Olympic slot.

Along with teammate Kim Mangrobang, Kilgroe ruled the 2019 SEA Games triathlon. The Filipino-American athlete has been on everyone’s radar since she began racing triathlons for fun in 2012—a hobby that landed her on the national team as one heck of a pro. The sometime model and now full-time athlete is also aiming for a slot at the 2020 Tokyo Olympics.

This Taekwondo jin has been hustling it out at every meet possible to make it to her ultimate dream: represent the Philippines at the Olympics. She lost her chance during the 2016 Rio Olympics, but is fighting tooth and nail for a spot at the 2020 Tokyo Olympics—for which there are only four slots available. Lopez’s most recent big win was during the 30th SEA Games where she took home a gold medal for the women’s 57-kilogram division, and that certainly won’t be her last.

All eyes were on Agatha Wong during the 30th SEA Games where she cemented not only her spot in the higher rungs of Filipino sports but also brought the rather niche martial art of Wushu to the forefront. She walked out of the regional meet with two gold medals for the taijiquan and taijijian events—and, after people online attributed her wins to her having a Chinese last name, Wong made it known that she fought and will continue to fight as a Filipino.

Two-time Olympian swimmer who represented the Philippines in the 2012 London and 2016 Rio Olympics, Alkhaldi has continued to snatch medals left and right for the country. Alkhaldi, whose mother is from Cebu and whose dad is from Saudi Arabia, has been competing since age five, and joined the Philippine national team at just 11 years old. She continued to break national records at the recent SEA Games and is sure to continue the streak.

Boxer Petecio was chosen to light the cauldron alongside boxing legend and sometime senator Manny Pacquiao to signal the start of the 2019 SEA Games. This was after she was crowned the world featherweight boxing champ at the 2019 Aiba Women’s World Boxing Championships—taking home another gold less than a day after gymnast Carlos Yulo topped the podium at the World Artistic Gymnastics Championships. Now, she’s one of our best bets for Tokyo 2020, too—a dream Petecio is fulfilling for her father.

The surprise winner of the 2019 SEA Games women’s marathon, Hallasgo took the top spot from defending champ and fellow Filipina, Olympian Mary Joy Tabal. Hailing from Bukidnon, Hallasgo was first spotted at a running event in Ilagan, Isabela and eventually made her way to win a gold in the SEA Games. She once again dominated at the Milo Marathon on January 20, clocking in at 2:52:53 while Tabal once again settled for second place. It certainly looks as if Hallasgo is just starting out, so we can’t wait to see what else she brings to the game!

Adventurer Savvy Seasoned Hidilyn Diaz Margielyn Didal Kristina Knott Kim Mangrobang Nesthy Petecio Kim Kilgroe Pauline Lopez Natalie Uy Jasmine Alkhaldi Christine Hallasgo Sports
Your Guide to Thriving in This Strange New World
Staying
In? What to watch, what to eat, and where to shop from home
OR
Heading
Out? What you need to know to stay safe when heading out