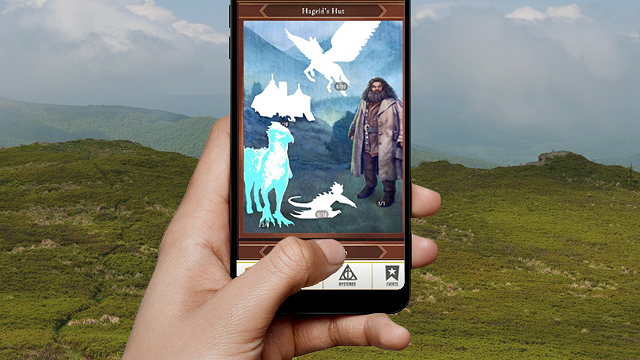 10 Fun AR Games to Play During Your Daily Commute

Gotta play them all!

(SPOT.ph) With the game-changing launch of Pokémon GO in 2016 and the new release of Wizards Unite, location-based augmented reality is a hot trend in games right now. Augmented reality (AR) uses your mobile to "change" your surroundings and simulate another world, taking role-playing games to new heights. They also use GPS, encouraging players to get out in the real world to progress in the game.

Since you need to physically go places to collect loot, explore areas, or battle monsters with these kinds of games, they’re the perfect apps to have for your daily commute. Why not make your travel to and from work a little more thrilling? But make sure you’re careful—with your phones, yourselves, and other commuters—while embarking on these mobile adventures!

Available on: iOS, Android
The game that started it all! Whether you watched the anime or played the console games, you likely wanted to be a Pokémon collector just like Ash and Misty. In 2016, it finally happened and people got out of their houses to catch Pokémon outside. The game shows no signs of slowing down. It’s still a hit, and if you’ve got Let’s Go Pikachu on the Nintendo Switch, you can even use your caught Pokémon and battle there!

Available on: iOS, Android
Still wish you got your Hogwarts letter when you were 11? This might be the next best thing. Harry Potter: Wizards Unite gets you to go out and have a magical adventure of your own. You can use familiar spells, find magical things, meet wizards and creatures, and even team up with your friends to complete wizarding challenges.

Available on: iOS, Android
Ingress Prime (formerly Ingress) was made by the same folks who brought us Pokémon GO and Wizards Unite—but way before these two games were even born. In this game, you play an agent that can pick between two factions: the Enlightened or the Resistance. Through AR, you can interact with the world around you, collect exotic matter and use it to fight the opposing faction.

Available on: iOS, Android
If you prefer collecting real creatures, Jurassic World Alive is the game for you. You get to build your own Jurassic World by roaming around and collecting different kinds of dinosaurs. You can even combine dinosaurs and create your own! It also has battle mechanics, where you use your dinosaurs to battle with other players and the dino teams they’ve built.

Available on: iOS, Android
The great thing about these AR mobile games is that you can roleplay and join adventures you’ve only seen in movies or read in books. If busting ghosts is more your thing, this game might just be your next fave! The more you explore your surroundings, the more ghosts you can blast with your proton beam. You can fight bosses with other real-life players in real-life locations and even interact with beloved characters from the franchise.

Available on: iOS, Android
This is another wizarding AR location-based game where you can customize your own wizard or witch, choose a class with special skill sets, and explore the world around you collecting loot and casting spells. You can even claim magical territories and fight with magical creatures to increase your level and rank.

Available on: iOS, Android
In this game the world is overrun by, well, an army of robots. Your task is to scan your area with your phone, and fire your rifles before they kill you. It’s more straightforward than other games on this list, but it will definitely make your commute more interesting by pretending you’re saving the Metro from killer robots. It keeps you moving, too, as you’ll need to physically move your device if you want to evade a robot’s blast.

Available on: iOS, Android
Do you run or walk to work? This might be a great game to get your heart pumping. It’s an audio-based adventure where you run to escape hoards of zombies. Each run is a mission where you collect resources, fight zombies, or just explore the post-apocalyptic wasteland you’re now living in. It’s a thrilling take on both fitness apps and augmented reality games.

The Walking Dead: Our World

Available on: iOS, Android
Love the show? Now, you can team up with your favorite characters and keep the walking dead at bay! You’ll see high-quality augmented reality zombies and fight them by using the weapons at your disposal. Explore your surroundings and replenish your materials or find even more zombies to eliminate.

Available on: iOS, Android
Orna has a lot of what other games in this genre has: going to real-life locations to battle and find resources, claiming real-world areas as your territories, finding and battling enemies when you explore, and many more. What makes this different is its use of 8-bit style for visuals that combines today’s trend of retro games with augmented reality.

Pokemon Go Harry Potter: Wizards Unite Augmented Reality Mobile Games Commuter Evergreen Ingress Prime Ghostbusters World Maguss Army Of Robots The Walking Dead: Our World Zombies Run Orna
Your Guide to Thriving in This Strange New World
Staying
In? What to watch, what to eat, and where to shop from home
OR
Heading
Out? What you need to know to stay safe when heading out