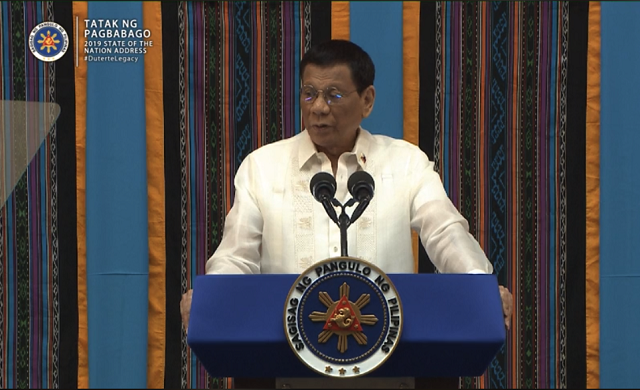 "We in government talk too much, act too little, and too slow."

(SPOT.ph) The fourth State of the Nation Address was delayed—no, a house coup is not to blame this time—with President Rodrigo Duterte arriving nearly an hour late to the Batasan Complex, Quezon City. But the president quickly made up for any lost time with a speech that lasted exactly one hour and 34 minutes, much longer than the "short" speech earlier reports had told us to expect. With film director Joyce Bernal at the production's helm, plus the Philippine Philharmonic Orchestra joining the event for the first time ever, we suppose we can understand why the president was in no hurry.

Here are 10 lines from President Duterte's 2019 State of the Nation Address (SONA) that stood out:

"The landslide victory of the administration's candidates, as well as the latest survey shows that my disapproval rating is 3%—I hope that the members of Congress, sana hindi kayo included sa 3%—inspires me to pursue relentlessly what we have started at the start of my administration."
A constant in every State of the Nation Address (SONA) so far, Duterte opened with a reiterated promise to pursue his controversial "war on drugs." Also, his first request to Congress was the approval of the death penalty for crimes related to illegal drugs, corruption, and plunder. This comes less than two weeks after he mocked Iceland for calling for an investigation into crimes against human rights in the Philippines at the 41st session of the United Nations Human Rights Council.

"We in government talk too much, act too little, and too slow."
Cue that scene from Zootopia with the sloth (you know the one). Duterte called out government agencies and personnel, not excluding himself, for taking days to pass legislation, do paperwork, and basically do what governments are supposed to do. "We are long on rhetorics but short on accomplishments," he added.

The president has called for government agencies to "improve service delivery and fight corruption" via the Ease of Doing Business and Efficient Government Service Delivery Act, but recognizes that much still has to be done—he specifically mentioned the Land Transportation Office, Social Security System, Bureau of Internal Revenue, Land Registration Authority, and PAG-IBIG as the agencies that drastically need to improve their services. Continuing with his rant, he advised the people to be assertive, especially if government offices ask for more payment than what's required. "I've been telling you, mag-iskandalo kayo sa opisina. Make a scene," he added.

"The girls there, the foreigners are waiting for you gentlemen to visit the place. They are all on the beach, sunbathing."
Talking about the recent rehabilitation of the Boracay Island, Duterte ad-libbed and talked about women waiting on the beach for men. This comment comes after he officially signed the Safe Spaces Act on April 17.

"I have met the enemy face to face, and sadly the enemy is us. We are our own tormentors."
The president expressed his dismay at the relentless and continued corruption at every level of government. Saying that "for every transaction, a commission; for every action, extortion," he called it a "national embarrassment and a national shame."

"The avoidance of armed conflict and protection of our territorial waters and natural resources require us to perform a delicate balancing act."
Duterte finally talked about the West Philippine Sea nearly halfway through his speech. According to him, he was not ready to enter into a war: "I am not ready or inclined to accept the occurrence of more destruction, more widows, and more orphans." He also stated that we would stand up to those who fish in our economic zone, "in due time."

"Sino'ng naninigarilyo dito? They should be exterminated from the face of the earth."

While pushing the second half of his planned tax reform, known as the Tax Reform for Attracting Better and Higher-quality Opportunities Bill, Duterte had this to say to smokers. He told the crowd that he is now sick from smoking as well, which was why he was pushing for Congress to pass bills "that will further raise excise tax on tobacco and alcohol."

"So I pray that if the earthquake comes, it comes now, this moment, kumpleto na tayo."
Duterte also found time to joke about the big earthquake (a.k.a The Big One) that is predicted to possibly hit Metro Manila. He shared that he consulted a psychic, who said that "the first crack" will hit right at the Batasan Complex. The president then remarked that it would be a great chance for the Philippines to start anew.

"If you think that you can run the country better than the elected one, then go ahead."
The president then made it clear that he would be willing to step down should a military coup arise. And then added, in a latter part of his speech, that he usually chooses to appoint military personnel to his administration: "Kasi utusan sila, madali."

"I will not merely coast along or while away my time during the remaining years of my administration. It ain't my style."

He shared his goal in the next three years: "a comfortable life for everybody, all Filipinos." He also shared that he dreams of "glowing days ahead for every Filipino" and "a Philippines better than the one I grew up with," pledging that he would continue to perform his duty until the last day of his term.