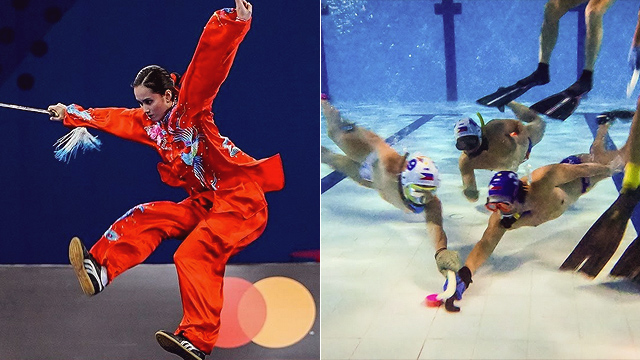 From underwater hockey to wushu.

(SPOT.ph) Basketball, volleyball, and football; unsurprisingly, in sports-loving Philippines, these games were sold out before the 30th Southeast Asian Games even began—which meant that free tickets were a no-no to these events, but that’s another story. This has been the largest edition of the regional meet so far, and with 56 sports included in the mix, some made a bigger splash than others.

There were probably a few games that maybe made you quirk an eyebrow, or at the very least, made you go, “What is that, anyhoo?” So to answer questions you might have, we round up some of the most interesting competitions that made the rounds for the 30th Southeast Asian (SEA) Games.

Also read:
Everything You Need to Know About the 2019 SEA Games
10 Cool Ways the Symbolic Cauldron Was Lit in Past International Games
Carlos Yulo Now Has 4 SEA Games Medals and Doesn't Plan on Stopping Yet

Here are 10 niche sports that made a splash in the 30th SEA Games:

Here’s something you can point out the next time anyone scolds you for spending too much time looking at a screen: Mobile Legends is an official sport at the SEA Games—and we won gold, too. Sibol, our national E-Sports team, took home the gold medal for Mobile Legends on December 8, beating the Indonesian team for the honor. This is the first time E-Sports was included in the roster for the biennial tournament. Teams battled it out on six titles: Mobile Legends: Bang Bang, Arena of Valor, Dota 2, Starcraft II, Tekken 7, and Hearthstone.

At first glance, kurash could look a lot like judo; fighters try to throw or trip their opponents onto their backs from a standing position using their own strength and stamina. This form of wrestling originated from the Turkic people of Central Asia, and has been in use for thousands of years—it’s practically a national sport in Uzbekistan. Estie Gay Liwanen gave us a gold medal in the women’s 63-kilogram category on December 1, followed by two silvers and five more bronze medals won by her teammates.

Think hockey, but instead of ice and aggressive Canadians, you have two teams battling it out on the floor of a pool. There’s still the puck being pushed towards goals on either end of the "field," but this time players with fins dive and jet through the water at top speed—and maybe even push back up to the surface for a bit of air every once in a while. Underwater hockey was invented by the British in the 1950s, who gave it the moniker “Octopush,” to keep divers in shape during the winter. For the 2019 SEA Games, our women’s team and men’s team pocketed silver and bronze respectively in the 6x6 competition, while both 4x4 underwater hockey teams won silver medals.

Also known as "boules," petanque could be compared to an oversized game of holen. The name is pronounced "peh-tonk" and derives from the French version of the game, which has been played since 1907. It is played with hollow metal balls that are thrown close to a wooden ball, called the cochonnet; the closer your ball is to the target, the more points you win.

This game is quite like basketball, except that dribbling or running while holding the ball is not allowed. Two teams of seven, with each player having a specific role, are confined to an area of the court, with the goal of having to shoot the ball into 10-foot tall goal posts at either end of the playing area. The Malaysian team kept their throne from the 2017 run, winning 48-42 against Singapore in the finals game on December 2.

A martial art originating in Indonesia, pencak silat covers a wide variety of forms and styles spread across the archipelago. As with many other martial arts, many silat movements are attributed to animals, though it also takes influence from other cultures. Edmar Tacuel delivered our only gold for the sport for the seni (artistic) division of the games on December 3. Meanwhile, controversy followed the 2019 bronze win of our 2017 gold-medalist Dines Dumaan in the men’s tanding (hand-to-hand combat) after it was alleged that he kicked Malaysian opponent Faizul Nazir in the face, knocking him unconscious.

Non-traditional sports are getting more and more time in the spotlight, and the obstacle course wasn’t about to fade into the background. It was the first time the sport was ever included in the roster of games for the regional meet and the Philippines shone with a golden total of 10 first-place finishes in the team relays and the individual races.

This fighting style was developed in Soviet-era Russia as a way for soldiers to end fights quickly and efficiently—enough info to make anyone step back a bit. Sambo is short for “samozashchita bez oruzhiya,” which translates to “self-defense without weapons.” The Philippines walked away from the Sambo competition with two gold medals, courtesy of fighters Mark Striegl and Chino Sy, plus one silver and three bronze medals.

Sipa, but on steroids. Also known as kick volleyball, sepak takraw involves players tossing a ball, traditionally woven from rattan, over a net using only their feet, knees, chest, shoulders, or head, but never their hands. The origins are highly contested, but the sport enjoys a lot of popularity in Southeast Asia, with each country having their own variations. The Philippines walked away with two gold medals from the men’s and women’s hoop events.

Arguably the niche sport to grab the most attention during the SEA Games, Wushu brought in a well-deserved goldmine for the Philippines. Wushu, which translates to “martial arts” is a contemporary style that includes a huge variety of Chinese martial arts. Agatha Wong brought the sport to the fore with a back-to-back win in the Taijiquan event, a title she also won in the 2017 run. The national team swept up a total of seven gold, two silver and two bronze medals for the run.