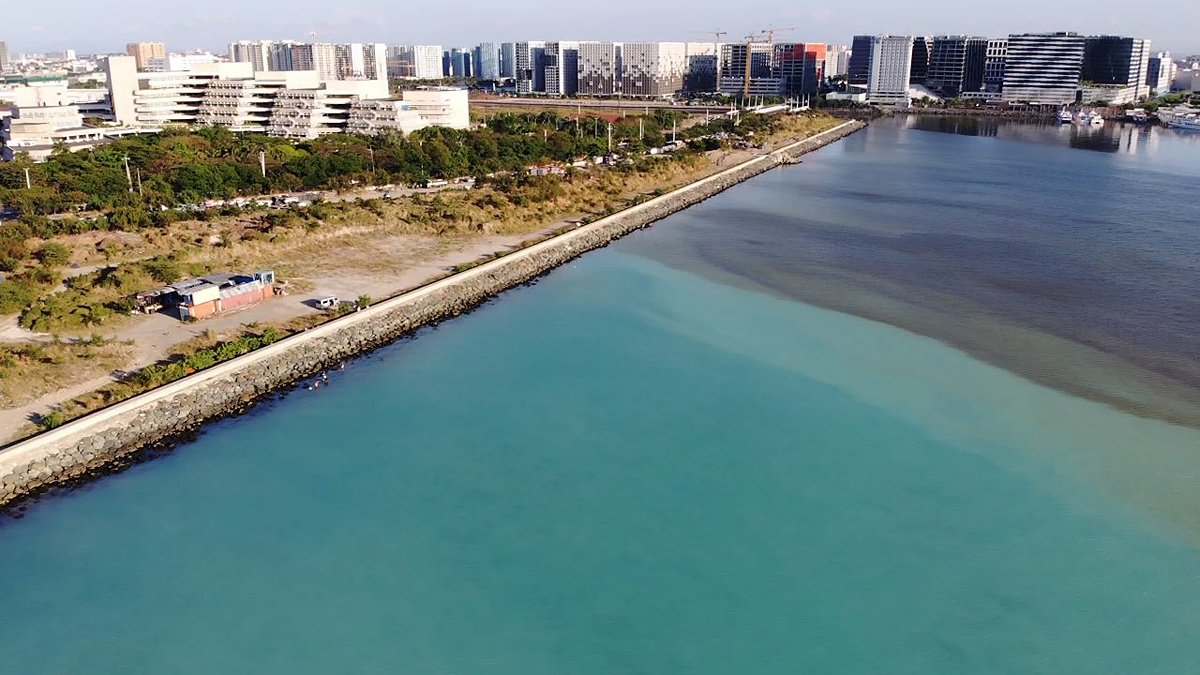 Manila Bay Has Cleaner Skies, But Not Clearer Waters

(SPOT.ph) Photos and videos of Manila Bay with what seems to be turquoise-blue water have been circulating online since Wednesday, March 25. While some were quick to rave about how nature is healing itself with people staying indoors since the government-mandated enhanced community quarantine started, there are others who are doubtful about the reasons behind this sudden change in Manila Bay's usually brackish water.

"Base do’n sa mga previous reports pa ng Marine Environmental Protection Command, nagdi-discolor 'yong tubig, nagkakaroon ng discoloration minsan, pagka merong pollutants," said Commodore Arman Balilo of the Philippine Coast Guard in a report by GMA's 24 Oras. Manila Bay, being a tourist attraction and close to the Metro’s water and air terminals, is lined with establishments that may or may not be disposing waste—chlorinated water from swimming pools included—into the bay.

This is not the first time that such occurrence happened. In March 2014, the waters near Roxas Boulevard had the same turquoise color for two days. Fisherfolk in the area saw a number of dead fish floating on the surface, which is proof of contamination. "It can be a bleaching agent, it can also be detergents or disinfectants," Engr. Noel Garlan of the Manila Bay Coordinating Office had explained in a report by TV Patrol on March 18, 2014.

This wasn't really the first time happened to Manila Bay. Got this vid wayback yr 2018. Out of curiosity, i ask the people living near coast guard why the water turned green. They said it was bcoz of a hotel nearby threw their pool water into the sea. pic.twitter.com/wltQ3G4R5e

The change in color could also have been caused by harmful algal blooms which, according to a 2019 study by the National Fisheries Research and Development Institute, has been happening with increased frequency since the 1980s. Harmful algal blooms (HABs) occur when algae grow out of control in an area and produce toxins that harm marine animals, resulting in human illness when affected fish and shellfish are consumed. We all know this as "red tide" because of the red tint that spreads in the water with an algal bloom, but this actually starts off as a green discoloration. And for Manila Bay, which has been subjected to a lot of human intervention like land use and reclamation, unregulated fishing, and water pollution, the conditions make the perfect recipe for frequent algal blooms especially in the summer.

Department of Environment and Natural Resources Undersecretary Benny Antiporda, however, seems to believe that this is all good news. "Mula nang naglinis tayo sa Manila Bay ganyan ang nangyari, unang-una napigilan natin iyong pagtapon ng mga tao [ng basura]. Iyong pagdagdag ng polusyon, ‘yon ang napigilan natin," he said in a video posted by UNTV News and Rescue on March 25. Plans were made to clean up and revive Manila Bay in January 2019. This started with a clean-up drive along Roxas Boulevard, which saw the removal of up to 45 tons of garbage.

In an article by the National Geographic on March 20, it was pointed out that fake viral posts of "wildlife triumphs" appear to be common given "a pandemic, a collapsing economy, and sudden isolation." According to Erin Vogel, a social psychologist and postdoctoral fellow at Stanford University, this idea that nature could heal itself amid the global crisis "could help give us a sense of meaning and purpose—that we went through this for a reason."

Manila Bay Metro Manila Manila Adventurer Savvy Seasoned
Your Guide to Thriving in This Strange New World
Staying
In? What to watch, what to eat, and where to shop from home
OR
Heading
Out? What you need to know to stay safe when heading out