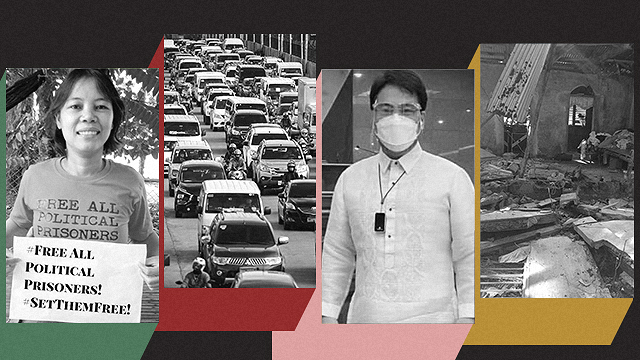 (SPOT.ph) With everything happening in the world this 2020, it's getting harder and harder to keep up. So before you get a headache while scrolling down your feed, we round up the most important news in the last 24 hours.

Here are the headlines you might have missed today, August 18:

Just before midnight on August 17, President Rodrigo Duterte announced that Metro Manila, Bulacan, Cavite, Laguna, Nueva Ecija, Batangas, Quezon, Iloilo City, and various cities and municipalities in Cebu will be on general community quarantine from August 19 to 31. This means that more industries could operate and that public transportation is once again partially allowed in these areas.

A Magnitude 6.6 earthquake hit Cataingan, Masbate on August 18 at around 8 a.m. According to the Philippine Institute of Volcanology and Seismology, the movement has tectonic origins that reached Intensity VII. Tremors were felt as far as Aklan, which registered Intensity I.

Human rights activist Zara Alvarez was gunned down at 8 p.m. on Monday in a private village in Bacolod City. The 39-year-old protested against human rights violations, was a research and advocacy officer of Negros Island Health Integrated Program, and served as a paralegal of Karapatan Alliance Philippines. The group said that Alvarez is the 13th human rights worker of Karapatan that was killed under the Duterte administration.

The number of COVID-19 cases in the Philippines continue to soar as the Department of Health reported on Tuesday an additional 4,836 patients, which raises the country's total to 169,213. More than half of the new cases (2,959) are from the National Capital Region, which is on general community quarantine starting tomorrow.

Bong Revilla Jr. rushed to hospital due to COVID-19

Senator Ramon "Bong" Revilla Jr. was rushed to the hospital on Tuesday afternoon, according to Bacoor Mayor Lani Mercado. The public official has developed pneumonia after he tested positive for COVID-19 on August 10. "Hospital care badly needed," his wife said.

Four Philippine volcanoes show some activity in the last 24 hours

Twitter was in chaos on Tuesday morning after reports that four volcanoes in the Philippines are showing some volcanic activity (e.g. releasing steam or emitting steam-laden plumes). The Philippine Institute of Volcanology and Seismology clarified that all four volcanoes have been under Alert Level 1 for a while now.

According to a study published on August 13 by researchers from Ohio State University, the melting of Greenland's glaciers and icebergs have passed a "tipping point" and can now be considered irreversible. "The Greenland ice sheet is losing mass at accelerated rates in the 21st century, making it the largest single contributor to rising sea levels," the study explained. The melting of ice causes more ice to melt, which means that there are less white sheets to reflect sunlight back to space. This hugely contributes to the release of greenhouse gases in the atmosphere, which results in warmer temperatures (and more melting of ice).