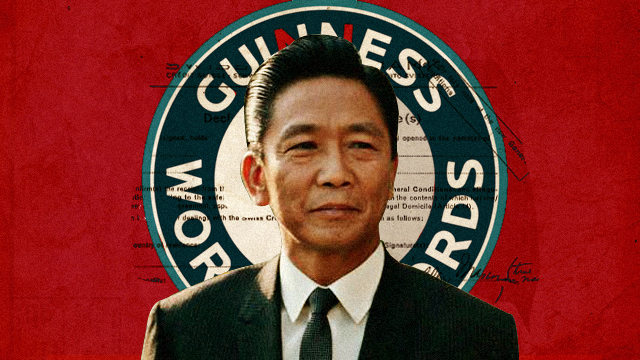 But should it be something to be proud of?

(SPOT.ph) Early this week on September 2, the House of Representatives approved a bill designating September 11 as "President Ferdinand Edralin Marcos Day." Should it become law, the day will be a special non-working holiday in Ilocos Norte—the late dictator's home province. September also happens to be the month when the entire Philippines was placed under Martial Law after Marcos announced the news on national television in the evening of September 23, 1972. With these two anniversaries coming our way—and in case you didn't know—Marcos happens to be recognized by the Guinness World Records for the title "Greatest Robbery of a Government."

According to the Guinness World Records' website, "the government of the Philippines announced on April, 23 1986 that it had succeeded in identifying U.S. $860.8 million (£569.5 million) salted away by the former President Ferdinand Edralin Marcos (1917–1989) and his wife Imelda. The total national loss from November 1965 was believed to be U.S. $5 to $10 billion."

The citation also narrated how the Marcoses fled to Hawaii in 1986, where the former president died three years later. In 1991, Imelda returned to the Philippines and was found guilty of corruption in 1993. Guinness World Records added that the former first lady was cleared of all charges on appeal in October 1998. She evaded two criminal corruption charges with a sentence of nine to 12 years in prison on each count.

The Guinness World Records, formerly known as The Guinness Book of World Records when it was first published in 1955, annually lists world records of human achievements and extremes of the natural world. It was the brainchild of Sir Hugh Beaver, and was co-founded by Norris and Ross McWhirter in London in August 1954. It is on a mission to "be the ultimate global authority on record-breaking" by "researching, measuring, documenting, and authorizing the world's superlatives."

Though not anymore explained in the Guinness World Records citation, Imelda in August 2019 was also found guilty of seven counts of graft by the Sandiganbayan Fifth Division for using her position as Minister of Human Settlements to maintain Swiss bank accounts during her husband Ferdinand Marcos' regime. This conviction sentenced her to imprisonment of six years and one month to 11 years for each of the seven counts, with perpetual disqualification from public office. A warrant of arrest was also issued by the court. She was, however, allowed to post bail amounting to P300,000.

According to the Philippine Commission on Good Governance, the Marcos family's ill-gotten wealth "is estimated between U.S. $5 billion to U.S. $10 billion, the bulk of it being deposited and hidden abroad." That's at least P251 billion, only P170 billion of which has been recovered in the last 30 years.

Ferdinand Marcos Imelda Marcos Marcos Corruption Guinness World Records Adventurer Savvy Seasoned
Your Guide to Thriving in This Strange New World
Staying
In? What to watch, what to eat, and where to shop from home
OR
Heading
Out? What you need to know to stay safe when heading out