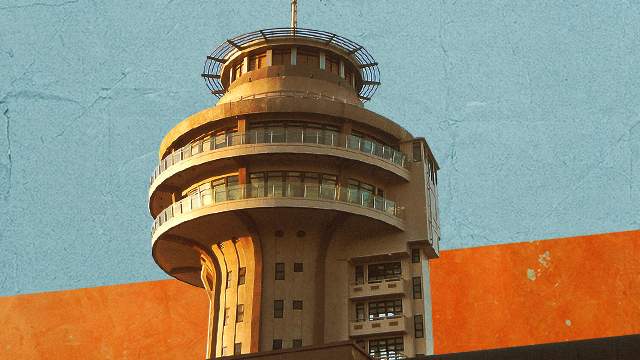 Here's another unusual Metro Manila gem to visit when possible!

(SPOT.ph) Once you've lived in Metro Manila for a while, it may feel like there's nothing left that can surprise you. Well, here's a little gem you might not have known about: between the Pasig City Hall and the Mega Market stands an old tower with a revolving floor—and it might just be one of the oldest of its kind in the Metro. If you ever needed a reason to tour all the fun places you might be missing out on in your own hometown, well here it is. The Old "Mutya ng Pasig."

The structure was originally called the Mutya ng Pasig and was built near the public market of the same name—now called the Pasig Mega Market, a.k.a. the Pasig Palengke—in 1974, under the administration of Emiliano R. Caruncho, Jr. With several floors full of concessionaires and a revolving restaurant at the top, the tower was a go-to spot for folks at a time when that area of Pasig City was still mostly just flat fields. Only one other revolving restaurant operated in Metro Manila around the same time; It was at the top of the Royal Hotel in Quiapo, Manila—except that the entire hotel was shut down in the '80s and turned into a storage-slash-clearance-outlet for the SM Malls.

Posted by Philippine History and Architecture on Sunday, September 1, 2013

Unfortunately, the same fate hit the Mutya ng Pasig Tower after the economic crisis of the tumultous '80s. Operations stopped after tenants were unable to pay rent to the local government and the tower slowly became abandoned. For nearly two decades, the old tower was used as government offices and a storage area for goods—and even a detention center, according to an Inquirer.net report.

The Transformation to "Pasig Revolving Tower"

Still, the story didn't end there for this unique landmark. In 2006, then Mayor Robert Eusebio decided that it was time to look into the tower and commissioned a two-year long study. After several revisions, the rehabilitation project was officially started by Mayor Maribel Eusebio, who is also his wife, in 2015. The revolving tower was opened again to the public in 2016.

Much of the tower's more than 40-year-old structural components were still intact, according to Inquirer. Aside from fixing the interior design and planning, they even added an entire extra floor and viewing deck, resulting in the humble-by-today's-standards tower to have 12 floors. There are also admin offices for local government and private companies and even a coffee shop. Plus, it will also house the Museum of Local and Modern Art, according to Noel Rivera, Pasig City Museum director and historian in the same Inquirer report.

While there are no daily operations, you can rent out the top floors of the tower for parties and events. There's the coffee shop and viewing deck, and, of course, the revolving restaurant. One full revolution takes about an hour and fifteen minutes, and will treat you to views of the sprawling Pasig City and beyond.

The old Revolving Tower is arguably one of the few Brutalist towers we have left, with its sharp angles still striking even with the new paint job it got as part of the rehabilitation. It is also one of the few landmarks we have that has been preserved amid the continuing evolution of Metro Manila. Fingers crossed we see more of these cool historical spots in the city!

Adventurer Savvy Seasoned Pasig City History Revolving Tower Nostalgia City Life
Your Guide to Thriving in This Strange New World
Staying
In? What to watch, what to eat, and where to shop from home
OR
Heading
Out? What you need to know to stay safe when heading out