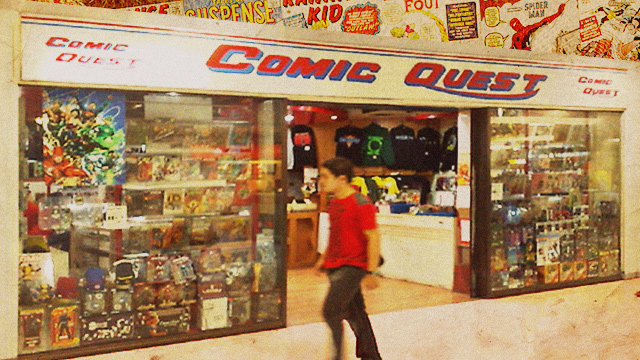 We got to talk with the comic bookstore's owner, Vin Simbulan.

(SPOT.ph) Filipino comic book fans mourned on September 16 when news broke that Comic Quest will "begin the process of closing down." Throwback stories were shared online as men and women in their in their 30s, 40s, or 50s recall the first ever comic book title that they bought from the local bookstore brand that's been around for the last 35 years.

"I have so many great memories of [Comic Quest], from being the store manager at the Megamall branch to planting the seeds of what would be Hinirang, to all the friendships that were made and strengthened there," Filipino writer Dean Francis Alfar shared in a public Facebook post.

A Bacolod-based toy collector and comic fan talked about the first time he went to Comic Quest at SM Cebu at the age of 10. "As a child [who couldn't] afford to buy expensive toys. Those expensive comic books, statues and action figures was my dream come true to see," one Diano Kornz said.

There were others who recalled collecting comic books the old-school way by waiting for the next edition and heading to Comic Quest week after week.

Comic Quest opened their first outlet at the now-defunct Red Square Arcade in BF Homes, Parañaque City, in November 1986. "My brother [and I] have loved comics from a very young age. And it was my parents who decided that instead of spending all our money on collecting, we should make money from it. So they decided to start the business," Comic Quest owner Vin Simbulan tells SPOT.ph in an online exchange.

He recalled "loving so many [comic book] characters" while growing up—from Dr. Strange because of his magic to Iron Man because of his armor. "But my main man has always been Superman because at his best he is a beacon of light—an ideal to aspire for, a hero who could be a god but decides to live among mortals and help as best he can," Simbulan adds.

This love for comic books, turns out, is common among many Filipinos. Through the years, they expanded to different branches in Greenhills, Makati, and various SM Malls all the way to SM Cebu. But for a range of reasons, Comic Quest had to close their shops one by one, and their branch at SM Megamall will be the last to go in October.

"Actually it was a deadly combo over the last few months: the crippling blow of the pandemic was made even harder when DC created more difficulty for retailers to source their products," explains Simbulan about the reason of the store's closure. COVID-19 has definitely taken a lot from our business sector as restaurants, tour operators, and retail brands were forced to shutter their doors permanently.

The Legacy of Comic Quest

But all is not lost as the local comic-book store already made a difference in its little corner of the world.

Comic Quest didn't only ignite the comic fan's passion for comic books in the DC and Marvel universes, but also promoted homegrown publications. They carried Filipino graphic novels like Ayi Santos' Bubay and the first photocopied editions of world-renowned Trese, speculative fiction anthologies edited by the Alfars, and other Filipino comic books. It was also a mainstay in comic conventions, fostering our love for storytelling and reading.

"It has definitely progressed with more local creators sharing their work. The industry is growing and will keep growing after COVID," Simbulan says about the comic-book landscape in the Philippines.

When asked who his favorite Filipino comic-book creators are, the Comic Quest owner opted for a safe answer. "This is a trick question because I am friends with all of them. I have honestly admired the work of so many of them because I'm a frustrated artist. I wish I could draw, but I don't have that kind of talent," he says.

But he singled out the late Gerry Alanguilan, who passed away at the age of 51 in January 2020. "He has done so much for local komiks and he is both an excellent writer and artist." Alanguilan first made waves in the Philippines with the alias Komikero, and later gained international fame through his graphic novels Wasted and Elmer, which feature Filipino characters and satirize racism. He worked for Image Comics and Marvel Comics as an artist and inker.

"Thirty-five years is a long time. Part of the secret how we stayed in business that long is the personal relationship we have with our regular customers. They have become part of our larger Comic Quest family and we are forever grateful for all the support they showered us with. We hope they keep collecting and remember us fondly when they read something they bought from our store," Simbulan shares.

As a thank you to fans through the decades, their outlet at SM Megamall is selling all titles, toys, and merchandise at a minimum of 50% off.