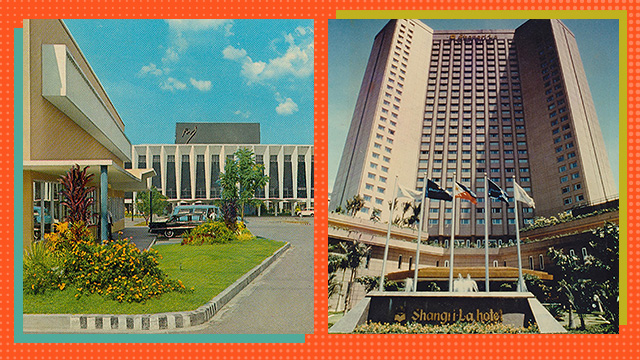 Before Makati Shangri-La, There Was Rizal Theater

Makati Shangri-La now stands where Rizal Theater once was.

(SPOT.ph) News of Makati Shangri-La's temporary closure came as a huge shock to Metro Manila folks. The establishment has long been a part of the cityscape, and more importantly, of day-to-day city life and it certainly felt like it would be open forever—even through the quarantine. So it feels almost apt that the site where it currently stands was once occupied by another structure that most people were sure would stand the test of time as well: Rizal Theater. We take a look into the story behind these two structures.

The History of Makati Shangri-La, the old Rizal Theater

When it first opened in 1993, the 28-storey Makati Shangri-La was the first hotel to open in the city in 17 years. It was at par with other landmark establishments—such as the InterContinental which opened in 1969 and sadly closed in 2015—and brought  Ayala Center to new heights. The Makati property opened a year after EDSA Shangri-La, the international chain's first foray into the Philippines, and in the same year as Shangri-La's Mactan Resort and Spa, Cebu.

The 703-room Makati Shangri-La housed some of the most memorable spots in the Metro. From restaurants like Shang Palace and Circles to its many ballrooms—some editions of the ABS-CBN Star Magic Ball were held in the Rizal Ballroom—and more, residents of the surrounding private suburbs, and folks from all around, came to the five-star hotel.

Before the hotel announced its closure, slated for February 1, Makati Shangri-La was allowed to operate for staycations by the Department of Tourism. Government authorities are hopeful for the return of the "pillar" of the local tourism industry soon enough, and fellow hoteliers remain optimistic.

The History of the Rizal Theater

Before the five-star hotel claimed the corner of the Ayala and Makati avenues, there was the Rizal Theater. If today's generation can talk about the same spot and remember good times feasting on buffets, the older ones will most likely talk about good times spent watching the latest—at the time—movies, and with air-conditiong to boot.

The structure was one of the most modern buildings in Makati when it first opened. The story goes that it was originally planned to be part of the Rizal Memorial Cultural Complex, the completion of which was scheduled for June 19, 1961 in time for the national hero's birth centennial. It was part of the Makati Commercial Center and was one of the city's go-to spot alongside the QUAD (designed by Architect Carlos Arguelles).

Rizal Theater operated as a film and performance venue. And that script adorning the facade? That is reportedly fashioned after Rizal's own. Folks may also remember Leila's, the theater's in-house restaurant and coffee shop.

As the decades passed, the theater got left behind. It was eventually demolished towards the end of the 20th century, where the Makati Shangri-La stands.

Adventurer Savvy Seasoned History Makati Juan Nakpil Rizal Theater Makati Shangri-la Nostalgia City Life Lifestyle News
Your Guide to Thriving in This Strange New World
Staying
In? What to watch, what to eat, and where to shop from home
OR
Heading
Out? What you need to know to stay safe when heading out