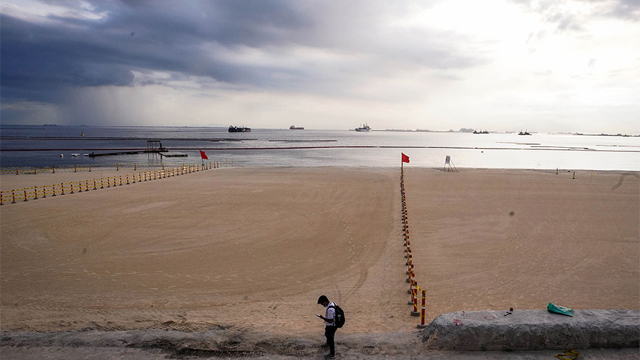 (SPOT.ph) In the last two decades, Manila Bay has seen several attempts to completely clean and rehabilitate its waters. Human settlement, industrial development, and reclamation projects have negatively affected what, in the 1900s, was the Metro's very own beach strip. But the Department of Environment and Natural Resources on February 18 reported that levels of coliform bacteria in the waters of Manila Bay have significantly dropped.

According to Environment Secretary Roy Cimatu, water samples taken on February 8 from 21 monitoring stations showed that fecal coliform level dropped to 4.87 million most probable number per 100 milliliters. This is 32% less than the annual average of 7.16 million most probable number (mpn)/100 ml in 2020. He also claimed that the fecal coliform levels in the water nearest the controversial artificial white sand dropped from 2.2 million mpn/100ml to 523,000 mpn/100 ml on January 4 based on the average count from three monitoring stations. But this is still not safe for swimming since the standard coliform level for recreational water activities is at 100 mpn/100ml, according to the government agency. (For reference, coliform level for drinking water is 0 per 100ml...because why would you want to drink water with sh*t?)

Buhay party-list representative Lito Atienza said on February 14 that the waters of Manila Bay are now “several times filthier” than 22 years ago. It was in 1999 when concerned citizens launched a civil action against the Metro Manila Development Authority and 12 other agencies that supposedly neglected the preservation of Manila Bay. This led the Supreme Court to force the 13 agencies to clean up its waters.

"This is really not surprising because up to now, of the 16.3 million water-served population in Metro Manila, only 15% or 2.4 million are connected to a sewerage system. Clearly, the bulk of Metro Manila’s household toilet waste continues to drain into waterways, including the Pasig River, that all empty out into the bay every day," Atienza added. He served as Manila City's mayor from 1998 to 2007 and secretary of the Department of Environment and Natural Resources from 2007 to 2009.

Heading Out Manila Bay Manila Adventurer Savvy Seasoned Science
Your Guide to Thriving in This Strange New World
Staying
In? What to watch, what to eat, and where to shop from home
OR
Heading
Out? What you need to know to stay safe when heading out