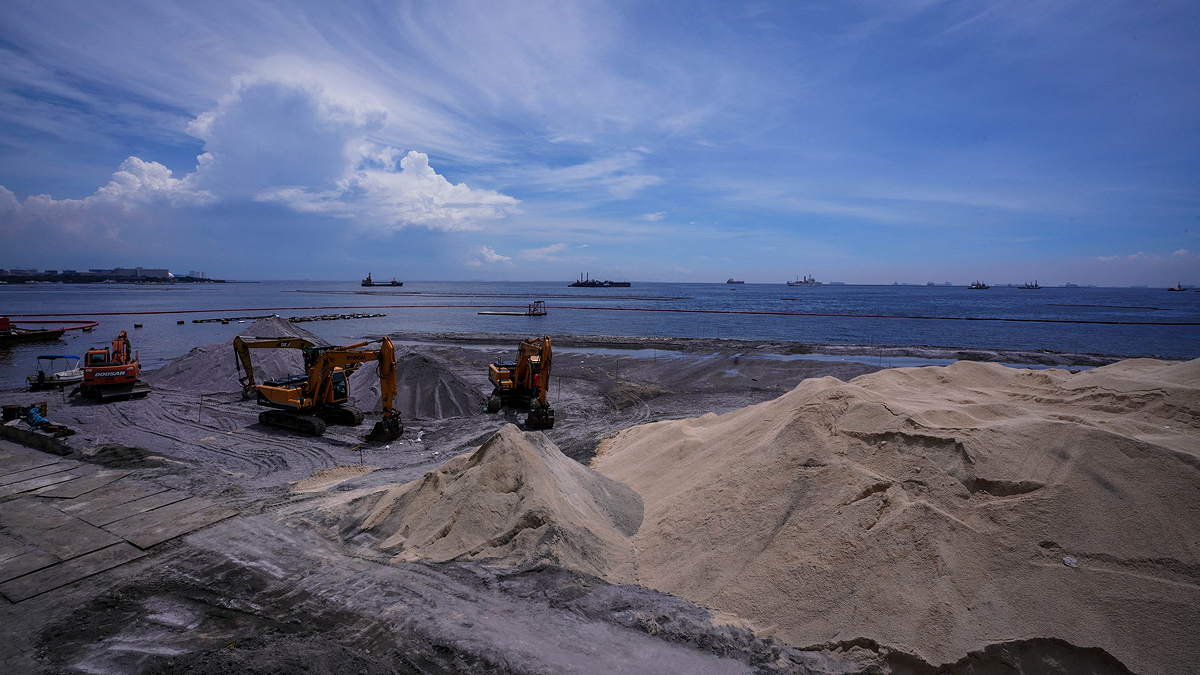 Sand mining is damaging the environment, according to the UN.

(SPOT.ph) A white-sand beach is nothing unusual, especially with all the gorgeous islands in the Philippines. But white sand unnaturally piled up along the grayish coast of a bay? Well, that's another story. Piles of white sand were found by the banks of Manila Bay near the United States Embassy on September 3, in what is reportedly part of the city's beautification and rehabilitation efforts. It already boasts a gorgeous sunset, so why not add some sand and call it "Manila Bay Beach," right?

According to a report by GMA's 24 Oras in the evening of September 2, the Department of Environment and Natural Resources intends to fill a 500-meter stretch of the baywalk with white sand.

Antiporda also said that the white sand came Cebu, according to a report by DZBB Super Radyo. ABS-CBN later reported a clarification from Antiporda: "The sand that came to Manila is not actually sand. It came from dolomite boulders that was crushed and turned into sand from Cebu. Kasi bawal 'yong sand na ibiyahe na galing sa mga coastal natin."

Cebu is home to plenty of beautiful white-sand beaches and sandbars, especially on Bantayan Island and Malapascua Island.

Back in January 2019, a total of 45.59 tons of garbage—or 11 trucks—were collected from Manila Bay. Clean-up drives have since been organized in the hopes of restoring the bay to its former glory. In March 2020, photos and videos of Manila Bay with what seems to be turquoise-blue water circulated online. This turned out to be a clear indication of high levels of water pollution and not of "nature healing itself" during the quarantine.

Environmentalists all over the world have expressed concern over sand mining, which is the extraction of sand from beaches, dunes, ocean and river beds. In 2019, the United Nations warned that this practice has been eroding river deltas and coastlines, damaging the environment, and hurting livelihood as government regulations fail to keep the supply and demand for sand in check. Removing a significant amount of sand from rivers reduce the sediment that gets carried by the water to coastal areas, which results to reduced deposits, and ultimately causes faster beach erosion.

Mining sand from beaches poses even more problems, including the destruction of the natural beaches' ecosystem, habitat loss for globally important species, destruction of nearshore marine ecosystems, increased shoreline erosion, reduced protection from storms and tsunamis, and possible economic losses, according to a study by Western Carolina University. With everything in the environment interconnected, you can just imagine the effect of a significant shift in the area's topography.

Using sand to build beaches in another body of water also has its own negative impact. Roaring Brook Lake in New York for example is seeing undesirable effects after adding white sand to its banks, according to their local website in 2015. Beach sand does not stay put, obviously, so you can just imagine how every footstep causes sand to drift towards the body of water, making the body of water shallower. Shallow water is warmer, lowers oxygen, and supports algae growth—things you don't want especially after our scientists discovered a new sardine species in Manila Bay.

White sand (or in this case, crushed dolomite) is also different from the local soil in Manila Bay, which would make them hard to mix at the bottom of the bay. Foot traffic and rain can easily make sand drift into the water, and it would take some time before the sand settles. Turbid water prevents natural UV light from disinfecting bacteria.

Authorities are expecting that the white sand of Manila Bay Beach will be ready by September 19, or International Coastal Cleanup Day.

UPDATE (September 9, 5:47 p.m.): This article has been updated to include DENR's clarification on the source of the sand and a statement from Greenpeace Philippines.

Manila Bay Manila Denr Environment Adventurer Savvy Seasoned News
Your Guide to Thriving in This Strange New World
Staying
In? What to watch, what to eat, and where to shop from home
OR
Heading
Out? What you need to know to stay safe when heading out