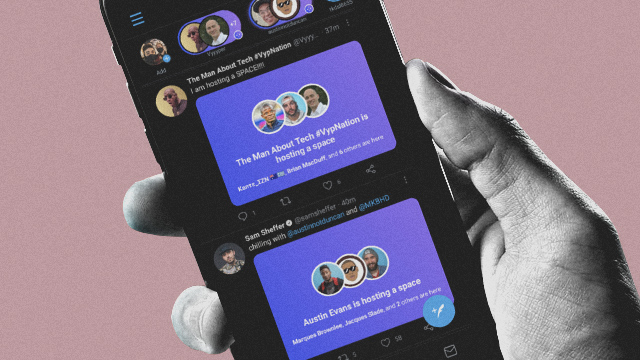 These Audio-Only Chat Rooms Are Like mIRC But With Sound

You can also come and go anytime.

(SPOT.ph) Back in the day, before Telegram and Viber, almost everyone's go-to messaging platform was mIRC. It was an Internet Relay Chat client built for Windows in 1995, and people from all over the world could talk (well, type) in a virtual meeting place called a "channel." It was like crashing a party to hang out with strangers and enjoy conversations with like-minded people. You could come in the middle of a chat, type in your two cents (or not), and exit anytime in a French kind of way. Fast forward to the 2020s, and people still find comfort in joining random convos; various platforms made it easier through audio-only chat rooms where you can just drop in. The lack of a visual component also seems to be a welcome feature to those who’d rather not show their face and just chime in to conversations while doing something else.

Also read: How Old-School Messaging Apps Were Actually Better Than the New Ones

Check out these audio chat rooms for when you just want to hang out online:

True to its name, Clubhouse is an invite-only, audio-based app that's been available to iOS users since March 2020, and most recently, to U.S.-based Android users. Each existing Clubhouse user gets to invite two people, who in turn can invite two more people, and so on. When you finally get in, you land on a page with a smorgasbord of conversational topics, from basketball to crypto, that you can follow; inside each conversation room are user accounts who are interested in the same thing that you can follow, too. The more topics and people on your radar, the more likely you can get into a chat room that's perfect for you. The room's creator facilitates what happens in the conversation, including (but not limited to) assigning who are speakers and allowing those who "raise a hand" to talk. Of course, you can also just lurk and listen to celebrities, friends, and strangers talk about a topic that you're also into.

First introduced in December 2020, Spaces was slowly rolled out only to selected Twitter users with more than 600 followers. Anyone who has that feature can host a live conversation on Twitter; and when someone you follow starts or joins a Space (a.k.a. a chat room), you see a purple bubble on the top part of your timeline as long as the conversation is ongoing. It's available only on mobile, not on desktop. When you join as a listener, you can react with emojis or tweets, or even request to speak. Twitter users who create or host the Space can assign speakers, invite other users, or even mute or remove anyone who's being rude.

Facebook has yet to officially launch their own audio-only room, which they're calling Live Audio Rooms, but they've been hinting at the audio-heavy feature since April. "We think that audio is also going to be a first-class medium,” Facebook CEO Mark Zuckerberg told journalist Casey Newton in a conversation broadcast on Discord on April 19. Aside from the Clubhouse-like product where people can voice chat in real time, they're also rolling out "Soundbites," or bite-sized audio content that people can launch into the feed, and “Boombox,” a collaboration with Spotify.

Another newcomer in social audio is Reddit Talk, which caters to Redditors and is available within subreddits. A preview was revealed on April 19, showing how selected subreddit moderators can host a Talk and invite, mute, and remove speakers. Once a Talk is live, any Redditor can join the room to listen in, react with emojis, or raise their hand to speak. The hosting feature is yet to roll out to the public, but those interested to try it out can sign up to their waitlist. Any Redditor can already listen in through their app on Android and iOS.

Slack’s Clubhouse clone (their words, not ours)

Slack is a business communication platform that's more like Microsoft Teams. Teams can chat with one another, create rooms for brainstorming, and basically bring the office to their computer screens. But Slack has been working on making their platform a bit cooler, such as allowing users to drop a video (like Instagram stories) or leave asynchronous audio (like a voicemail) sometime in the future. In a Clubhouse roundtable hosted by ex-TechCruncher Josh Constine on March 26, Slack CEO Stewart Butterfield said that they're essentially building a Clubhouse-like feature for Slack.

"Yeah, I’ve always believed the ‘good artists copy, great artists steal’ thing, so we’re just building Clubhouse into Slack, essentially. Like that idea that you can drop in, the conversation’s happening whether you’re there or not, you can enter and leave when you want, as opposed to a call that starts and stops, is an amazing model for encouraging that spontaneity and that serendipity and conversations that only need to be three minutes, but the only option for you to schedule them is 30 minutes. So look out for Clubhouse built into Slack," he was quoted. It isn't lost on us that he basically said that while in a Clubhouse room.

Spotify is already an audio-heavy platform, especially with its popularity in hosting and streaming recorded podcasts. But the music app is also joining in the trend of drop-in voice rooms. They've already acquired Los Angeles-based startup Betty Labs, which is known for creating the live sports audio app Locker Room; and on their way to rebranding the app to cater to other lifestyle content,naming it Spotify Greenroom.

Discord has always been a messaging platform—through video calls, text messaging, and file sharing—designed for communities called "servers." But on March 31, they also introduced live audio rooms called Stage Channels. It's available on all Discord's platforms, including Windows, macOS, Linux, iOS, Android, and browsers. Unlike the usual voice channel of Discord, the Stage Channel has a more controlled room where only certain people are allowed to talk to a bunch of listeners. Discord is now the only platform that has made the social audio room available to all their users, since Clubhouse is an invite-only, iOS-only app and Twitter Spaces is only limited to some users.

Calamansi is a Filipino-focused social media app launched in November 2019. It has since become a platform for audio live casts, with live audio rooms covering news, entertainment, sports, and just about anything trendy or interesting in the Filipino community. A room can host up to 50 speakers and over 10,000 audience members.

Staying In Chatroom Social Media Facebook Twitter Clubhouse Reddit Spotify Slack Calamansi Adventurer Savvy Seasoned Tech
Your Guide to Thriving in This Strange New World
Staying
In? What to watch, what to eat, and where to shop from home
OR
Heading
Out? What you need to know to stay safe when heading out