PH Coast Guard Angels of the Sea Uses Female Radio Operators
Loading
Already a member? Log in
No account yet? Create Account
Spot.ph is your one-stop urban lifestyle guide to the best of Manila. 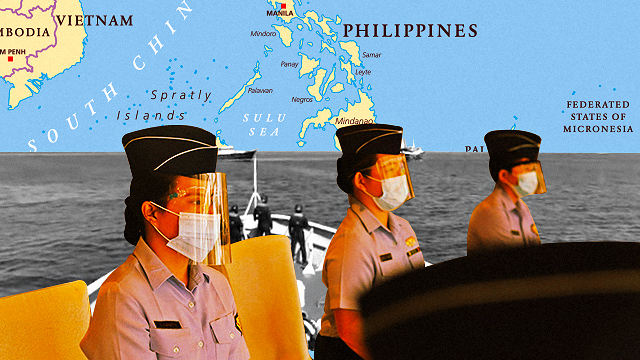 They're meant to "become the voice of peaceful and rules-based order at sea."

(SPOT.ph) On April 27, the clear voice of  coastguard radio operator Gretch Mary Acuario rang overs the waters of Sabina Shoal in the West Philippine Sea, calling a challenge to seven silent Chinese militia vessels. "This is Philippine Coast Guard BRP Cabra (MRRV-4409). You are within Philippine exclusive economic zone. You are requested to provide the following: name of vessel, intention, last and next port of call on Channel 16," said Acuario. Sometime after her message, the still silent vessels then lifted their anchors and went away.

This event was catalyst for the Philippine Coast Guard to initiate the "Angels of the Sea," the first-ever national-level all-female radio operators course. An 81-strong class were the first to graduate on June 25.

Also read:
That "Piece of Paper," or the UN Tribunal Ruling on the West Philippine Sea: A Short History
The Time to Retire the Maria Clara Mentality Was Long Ago

The First Official "Angels of the Sea"

The idea for an "Angels of the Sea" group started in June 2018. Female radio operators were deployed by the Philippine Coast Guard (PCG) to the Basilan Strait and Sibutu Passage in Southern Mindanao as part of the answer to rising cases of piracy and kidnapping, said the PCG in a Facebook post. The move was done "to temper seafarers' anxieties," they wrote.

The course was founded by Rear Admiral Ronnie Gil Gavan "in an effort to help sustain the empowerment of women in the Coast Guard service," said the PCG.

These female voices are an "evolving unique importance," said Vice Admiral Leopoldo Laroya during the June graduation ceremony. It is important to have these "Angels" on board "especially in communicating with foreign ships, so as not to elevate tension."

“The Command recognizes the evolving unique importance of having female radio operators aboard PCG vessels and shorebased units, especially in communicating with foreign ships, so as not to elevate tension. We want our ANGELS OF THE SEA to become the voice of peaceful and rules-based order at sea, especially in our country's sensitive maritime frontiers,” Laroya said.

It is admittedly an unexpected niche role for women to take on in our fight for the West Philippine Sea. Laroya though says it will have the added purpose of "minimizing gender discrimination and highlighting the important role of women in public service," added Laroya.

Some of the radio operators are assigned to patrol ships participating in the PCG Task Force Pagsasanay. They are on rotational training exercises at different areas of Philippine waters—the West Philippine Sea included.

The Importance of the Female Voice

When the "angels" were deployed to the Sibutu Passage,  their voices served as "the reassuring voice of a mother to a child, or a girlfriend or wife to a loved one facing a perceived danger," coastguard spokesman Commodore Armando Balilo told the South China Morning Post.

The officers are quick to point out the supposedly pyschological aspects of blasting out a female voice to potential threats—the actual effectivity of that argument is up for discussion.

"Perhaps a stronger diplomatic stance and clearer analysis of the geopolitics in the area and a better understanding of how we balance the power interests in the region would serve our interests better than quibbling about voices, whether male or female, will have any real effect on the equation," pointed out Doctor Sylvia Estrada-Claudio, dean of the University of the Philippines' college of social work in the same SCMP report.

As Acuario herself told The Telegraph, she does not think it was specifically her voice that did the trick. "It was the actual radio challenge. But it goes to show that females can be trusted to do tasks and be on the same equal footing as men."

Adventurer Savvy Seasoned Philippine Coast Guard Pcg West Philippine Sea Wps Hard News Staying In
Your Guide to Thriving in This Strange New World
Staying
In? What to watch, what to eat, and where to shop from home
OR
Heading
Out? What you need to know to stay safe when heading out