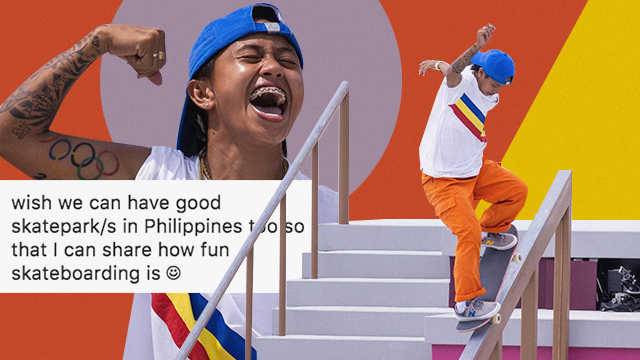 She's been campaigning for it since 2019.

Arriving back home after a memorable stint in the Tokyo 2020 Olympics, Margielyn Didal—the Filipina athlete who clinched a spot in the final round of the Women's Street Skateboarding category—commemorated her run at the world's most esteemed sporting event in a touching Instagram post. The 22-year-old thanked her family, friends, girlfriend, and supporters in a heartfelt message posted alongside photos of her Olympic performance. Didal finished off the post by sharing a heartfelt wish for more skate parks in the Philippines.

"My first Olympic[s] was epic," she wrote on Instagram as she thanked everyone who supported her journey to Tokyo. She also added: "[I] wish we can have good skate parks in the Philippines too so that I can share how fun skateboarding is."

Didal's sentiments echoed a similar plea she had already made back in 2019, after winning gold in the 30th Southeast Asian Games.

"Please, Philippines, wake up po tayo," she said at the time. "First day, first event natin, we got three medals in one day from skateboarding. But we need to wake up. Ilan ba skate parks ngayon? Para magising po lahat, kailangan natin ng skate parks and (there will be) more medals to come."

Didal arrived back in the country on the night of July 28, Wednesday, together with weightlifting gold medalist Hidilyn Diaz. The Filipina was able to finish the games with a gallant fight in the event finals, despite having to train overseas due to a lack of quality skate parks in the country. Right before the Olympic opening, Didal had to go to the United States for last-minute training. The Cebuana grew up skating on the hard asphalts on the streets.

Earlier this year, Didal unveiled a custom skate park in Soul Sierra, Cebu, with the help of her major sponsor, Red Bull as well as the National Skateboarding Association. She even had a hand in designing the obstacle for the training facility.

This story originally appeared on SPIN.ph. Minor edits have been made by the SPOT.ph editors.

Margielyn Didal Tokyo2020 Olympics Savvy Adventurer Seasoned Athletes Topspot Cebu Syndication Syn-00291
Your Guide to Thriving in This Strange New World
Staying
In? What to watch, what to eat, and where to shop from home
OR
Heading
Out? What you need to know to stay safe when heading out