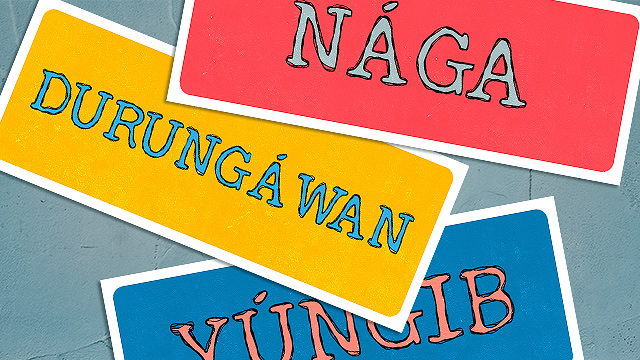 Say durungáwan instead of bintanà, and make heads turn for good reason.

(SPOT.ph) The Filipino language has developed an interesting vocabulary with words derived from our colonizers' languages (Spanish, American, and Japanese), adopted from our Southeast Asian neighbors, or evolved from our Malay lineage. But foreign influence has had such an effect on us that we know more about our loanwords than local terms, which are actually much more poetic.

Keep these beautiful Filipino words handy for your next convos:

What you probably use: Bintanà

“Bintanà” is a Filipino word from the Spanish “ventana,” but you can also use the more poetic “durungáwan” that seems like something from the days of kundiman and harana. An archaic Tagalog term, durungáwan comes from the root word “dúngaw” (noun) with the affixes “du-” and “-an.” A Filipino synonym is “dungawán.”

What you probably use: Hagdan-hagdang palayan

Officially cited as the Rice Terraces of the Philippine Cordilleras on the list of UNESCO's World Heritage Sites, the stair-like rice fields carved into the mountainside are commonly called "hagdan-hagdang palayan," especially in elementary history books. The agricultural wonder, however, has a Filipino name called “payyó” (or “payáw,” “páyew”), which has origins from the Ifugao language—spoken by the people of the Cordilleras—and it doesn’t get more authentic than that.

What you probably use: Kuwéba

“Yúngib” brings an old-school radio-drama vibe, but this Filipino word for cave is as local as it gets, so much so that it’s tagged as Sinaunang Tagalog in the Filipino dictionary. “Kuwéba,” on the other hand, is a derivative of the Spanish word “cueva.”

What you probably use: Lamésa

“Lamésa” or “mésa” are words we often use for “table.” Like many Filipino words, “mésa” has Spanish roots. But you can also use the Tagalog word “hapág,” which has two syllables anyway. There’s the more specific “hapágkainan” to refer to your dining table; or “dúlang,” which has Bikol, Ilokao, Ivatan, Kapampangan, Pangasinan, Tagalog, and Tausug origins, to refer to a lowered table.

What you probably use: Elepánte

When referring to the huge mammal with a snout, we use the local word “elepánte”—“elefánte” in Spanish and “elephant” in English. But there’s also the Filipino term “gadyâ,” which is used by the Ilokano, Kapampangan, and Tagalog.

What you probably use: Tarsier

What is the Filipino word for “tarsier”? You probably use “tarsier,” too, not realizing that we have a local word for it. (Don’t worry, we didn’t know either until we wrote this article.) The small, nocturnal primates with big eyes are called “malmág.”

What you probably use: Ágila

“Ágilá,” a Filipino word for “eagle,” comes from the Spanish word “águila.” But if you want to use a more local term, there’s “bánoy.” which is an archaic Tagalog word for the majestic birds from the genus Haliaeetus.

What you probably use: Storm surge

When Typhoon Yolanda hit the Philippines in 2013, it didn't only bring strong winds and heavy rainfall. Storm surges in the Visayas region claimed more than 6,000 lives and wiped out towns and provinces in Leyte and Samar. We heard it in the news as "storm surge", and not as the local term “dalúyong,” more specifically “dalúyong bagyó.” The Filipino dictionary defines "dalúyong" as big waves caused by strong winds, earthquakes, or other forces of nature.

What you probably use: Narra

The narra is known for its height that can reach up to 100 feet, thick foliage, and thick trunks. It's widely distributed in Borneo, Myanmar, New Guinea, and the Malay Peninsula. And while it's regarded as the Philippines' national tree, "narra" as it turns out is a borrowed word from the Spanish language. The Filipino word for it is "nága,” which comes from the Bikol, Sebwano, and Tagalog languages.

What you probably use: Gintô

We’ve been saying, reading, and hearing the word “gintô” these past few days especially after Hidilyn Diaz’s big win at the Tokyo Summer Olympics. “Gintô'' has Chinese origins, owing to our trade practices with other Asian countries from centuries ago. A more beautiful-sounding Filipino word for “gold” is “buláwan,” which comes from a number of Philippine languages like Bikol, Hiligaynon, Sebwano, and Tagalog. Interestingly, the root word of “buláwan” is “búlaw,” which refers to yellow—a color close to gold.

Buwan Ng Wika Filipino Words Philippines Adventurer Savvy Seasoned Staying In
Your Guide to Thriving in This Strange New World
Staying
In? What to watch, what to eat, and where to shop from home
OR
Heading
Out? What you need to know to stay safe when heading out