Where to Register and How to Use the Official StaySafe App
Loading
Already a member? Log in
No account yet? Create Account
Spot.ph is your one-stop urban lifestyle guide to the best of Manila. 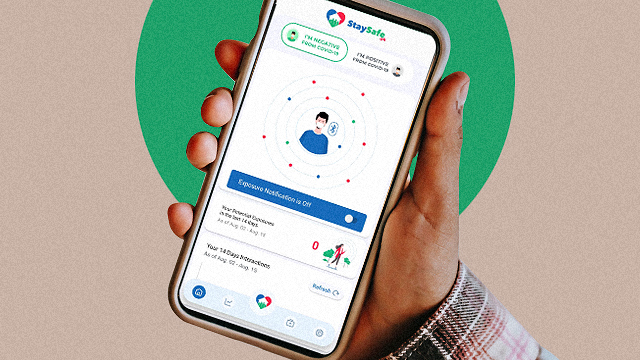 Everything You Need to Know About the StaySafe App

The DILG is encouraging all LGUs and establishments to use the app.

(SPOT.ph) One of the measures to finally end the pandemic once and for all is through effective contact-tracing measures. Some establishments use the good ol’ paper-and-pen and ask customers to manually sign up their names before they enter. Other local government units have their own contact-tracing apps that residents need to download on their phones. There are other cities that distribute QR codes through keychains to help those without the capacity to download their own. At this point, you probably have at least three QR codes in your gallery—one for your city of residence, one for your place of work, and another for another city that you frequent.

StaySafe app is ideally the contact-tracing program that would eliminate the redundancy of having too many contact-tracing apps on your phone—at least, until its use is strictly and fully implemented nationwide.

StaySafe App Versus Other Contract-Tracing Apps

StaySafe.ph was developed by Multisys Technologies Corporation together with the Department of Information and Communications Technology. It was first rolled out on April 22, 2020 as the country's "official social-distancing, health-condition reporting, and contract-tracing system that will assist in the government’s response to COVID-19," according to Inter-Agency Task Force Resolution No. 27. "We want all the Filipinos to use it, so we will have a uniform application," said Presidential Spokesperson Harry Roque during the app's official launch on September 3, 2020.

It was officially turned over to the Department of the Interior and Local Government on March 29 in an effort to boost the country's contact-tracing program. “Instead of using other apps, it is imperative for local government units (LGUs) to use the StaySafe app for a unified system that will allow seamless, fast, and efficient contact tracing efforts,” Department of the Interior and Local Government (DILG) Officer-In-Charge Bernardo Florece Jr. said during the signing of the Memorandum of Agreement. DILG Secretary Eduardo M. Año on April 23 described it as "a work in progress, but seriously, we are now focusing our attention on it and we will make this work."

More than a year since the app was released, Quezon City is still using their KyusiPass; while Taguig City has their TRACE (Taguig Registry for Access and Citizen Engagement). Other LGUs, like Pasig City (PasigPass), Valenzuela City (ValTrace), Antipolo City (Antipolo Bantay COVID-19), Mandaluyong City (MandaTrack), and Taytay (Taytay Rizal), entered into a Contact Tracing Network Consortium Agreement that integrates their QR codes and local database. Residents from Pasig City, for example, can flash their PasigPass QR code for scanning when entering a mall in Mandaluyong City. Other provinces require the use of SafePass for incoming travelers. Airports, on the other hand, are using Traze.

"If the LGU has already procured its own system and it’s being used widely, they can continue with it provided they integrate it with the Stay Safe application which is required under IATF Regulations," DILG Undersecretary and Spokesperson Jonathan Malaya said on March 19. They are asking LGUS to stop developing their own systems, and use the StaySafe app instead.

If you still don’t have your StaySafe.ph registration, here’s where to get started.

How to Register With StaySafe App

StaySafe.ph is available on Google Play and App Store. You can also register your profile and download your personal QR code through any Internet browser on your laptop or your phone.

How to Use the StaySafe App

The StaySafe app on your phone uses the Google/Apple Exposure Notification system, which facilitates digital contact tracing. It was introduced by Apple Inc. and Google in April 2020 in all Android and iOS smartphones, and was integrated in the StaySafe app in April this year.

With this technology, your phone can detect through Bluetooth and alert you if there are users near you who are COVID-19 positive. This, of course, works with the assumption that those who tested positive with COVID-19 actually tap on the "I'm Positive from COVID-19" button to mark their status, turn on their phone's Bluetooth, and enable the Exposure Notification feature. Individuals who turn out to be positive are also encouraged to enter their case number and update their Health Check page for monitoring purposes

As for privacy, Apple Inc. and Google guarantee that no personally identifiable information can be obtained through the Google/Apple Exposure Notification (GAEN) system. The system also changes your phone's ID every 10 to 20 minutes to prevent any breach in privacy protocol. Aside from the interactive GAEN feature, the app's landing also shows the number of potential exposures in the last two weeks and details which day you may have been exposed to a COVID-19 patient.

The second tab on the StaySafe app indicates COVID-19 updates and statistics, such as total number of confirmed cases, recovered cases, and deaths; while the third tab shows easy-to-understand reminders in preventing COVID-19: avoid close contact, wash your hands often, and wear a face mask. There’s also a list of symptoms to watch for.

The main icon, which is the StaySafe.ph logo, automatically opens your phone’s Internet browser and shows you your StaySafe QR code. You can download this as an image in case you don’t have mobile data or WiFi when heading out. It also has a built-in scanner for when you need to scan an establishment’s QR code, but this works only when you’re online.

Where to Use the StaySafe App

In an effort to boost contact tracing through the centralized StaySafe app, the Department of Trade and Industry, Department of Tourism, Department of Labor and Employment, Department of Health, and the DILG signed a Joint Memorandum Circular on the Safety Seal Certification Program on April 23. This voluntary certification scheme ensures that establishments, including but not limited to government offices, hotels, resorts, restaurants, supermarkets, convenience stores, banks, and malls, are in compliance with the minimum public health standards. It also guarantees that the establishment bearing the Safety Seal uses the StaySafe app.

On June 17, the Land Transportation Franchising and Regulatory Board issued a memorandum that requires the mandatory use of the StaySafe app in all public utility vehicles, effective June 21. They're required to create their own QR code, which would be "conspicuously displayed" at the entrance door and inside the vehicle. The circular also requires all passengers to scan the QR code when boarding.

According to Malaya in March, the DILG aims to reach at least 50 million users and connect all 1,634 city and municipal LGUs across the country. It's currently being used by some 15 million individual users and 700 LGUs.

Covid-19 News Adventurer Savvy Seasoned Explainer Staysafe App Apps Gadgets Greener
Your Guide to Thriving in This Strange New World
Staying
In? What to watch, what to eat, and where to shop from home
OR
Heading
Out? What you need to know to stay safe when heading out