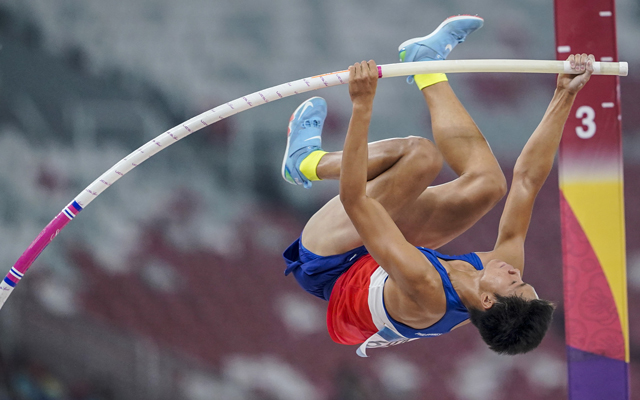 He is already getting multiple offers from different countries to change flags.

(SPOT.ph) When pole vaulter EJ Obiena was the only Asian to make it to the finals round of the 2020 Olympic Games in Tokyo, Filipinos all over the world were rooting for him. He is one of the many athletes that made us proud at the international sporting event. And despite allegations hurled at him by the Philippine Athletics Track and Field Association, the national athlete said in a post that he has "no desire to change nation."

Also read: EJ Obiena Asserts Right to a Fair Competition and We Have No Choice But to Stan

The November 29 statement came after Obiena’s mentor Jim Lafferty revelation that there are already multiple offers from different countries for the athlete to compete under their flags.

“Long before this happened, there was already a line of people at his door to offer him a passport,” said Lafferty in an interview with ONE Sports’ Gretchen Ho. “Multiple [countries]. It’s not one. It’s multiple.”

The professional track and field coach pointed out that Obiena is "the hottest thing in track and field" as he has climbed the world ranks from the 30th to the 5th, then later slipped to 6th. The 25-year-old Olympian smashed his own record (and, ultimately, the national record) during the Paris leg of the 2021 Wanda Diamond League on September 2.

Obiena also confirmed this in his post: "It is also true I have been approached several years ago already by other nations, floating lucrative pay packages to compete for their flag." But "loyalty matters" for him and for his mentor, and he has therefore said "no" several years ago.

"I love my country. I am proud to compete for the flag of the Philippines. I get chills every time I hear our anthem played and to watch that flag rise high. Every time I step on the podium I force myself not to cry, kasi papangit sabay baka maging meme pa like MJ. From my athletes ego, I take pride and joy to win and win even when I’m not “supposed” to be the victor. I will never abandon my nation because of money. That’s not loyalty. At least not how I define it. "

He is still "focused on winning gold medals for [his] nation, my country, my flag—The Philippines."

Obiena announced on Sunday, November 28, that he has tapped lawyer Alex Avisado and the Gana Atienza Avisado Law Offices as his legal counsel. He has also appointed Lafferty and lawyer Bobbet Bruce as his official spokespersons.

He currently battles allegations of falsification of liquidation documents and failure to pay his his Ukrainian coach Vitaly Petrov brought forward by the Philippine Athletics Track and Field Association. According to federation president Philip Juico, Petrov told the federation that he was not being paid his salary since 2018 worth EUR 85,000 (over P4.8 million). But the coach already corroborated that there's no such issue. The allegations later shifted to late payments and inconsistent liquidation forms, which Obiena already apologized for as he emphasized that he's an athlete, and not an accountant.

Ej Obiena Olympics News Hard News Adventurer Savvy Seasoned
Your Guide to Thriving in This Strange New World
Staying
In? What to watch, what to eat, and where to shop from home
OR
Heading
Out? What you need to know to stay safe when heading out