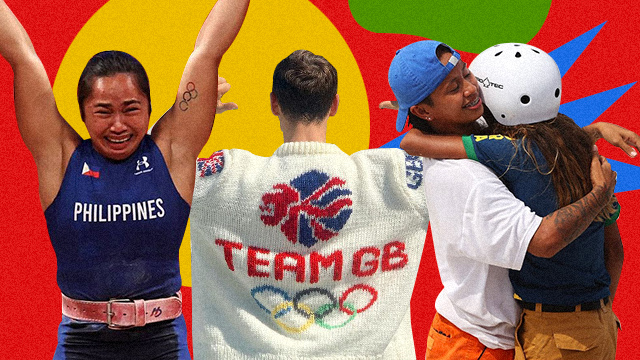 From Tom Daley knitting at the stands to Margielyn Didal giving everyone hugs.

(SPOT.ph) After a one-year delay, the 2020 Summer Olympics opened on July 23 at the Olympic Stadium in Tokyo, Japan. And we can definitely agree that this edition is like no other: 20 new events—including skateboarding and surfing—were introduced; there were limited spectators because of the ongoing pandemic; and men's and women's categories are almost finally equal in number. There were also priceless moments shared in and out of the games while the whole world is all eyes on the international multi-sports event.

We round up all the times that the Tokyo 2020 Olympics gave us the good vibes we needed:

Tokyo 2020 was Filipina weightlifter Hidilyn Diaz's fourth Olympic appearance. In 2008, she broke national record (and her own) in the women's 58-kg category; in 2012, she once again beat her personal best; and in 2016, she finally took home an Olympic medal—a silver one. Fast forward to 2021, and she's made history by bagging the Philippines' first-ever Olympic gold medal–and setting a new Olympic record at that.

Skateboarder Margielyn Didal may have bowed out of the competition on July 26 after clinching seventh place, but she won the hearts of many. The Cebuana athlete became known for showing her full support to other skateboarders, whether it’s a pre-game Tiktok routine with Brazilian skateboarder and silver medalist Rayssa Leal or fist bumping with her competitors. The global stage will definitely never forget her face, too—literally! The 22-year-old "photobombed" a number of Olympics snaps and danced her way onto international television, which will forever live in our feeds (and hearts).

Lots of hugs from and for everyone

Some of the sweetest moments during the Tokyo Olympics were seen on the sidelines as players displayed the beautiful value of sportsmanship. Rivals hugged one another after a match, competitors high-fived after a good run, and others just gave their fellow athletes some good ol' pep-talks. A photograph of Nesthy Petecio's big hug with Japan's Sena Irie went viral, Didal's bear hug with Leal became a GIF, and Carlo Paalam giving Japanese rival Ryomei Tanaka a forehead kiss was lauded for its great display of sportsmanship.

Tom Daley as a knitting influencer

British diver and three-time Olympic medalist Tom Daley was seen a couple of times sitting in the stands during diving events. Now, while there's nothing unusual about cheering on fellow divers; what caught everyone's attention was that he was doing it while knitting. Some of his knitting projects during the Olympics were a purple sweater for his French bulldog, a pouch for his gold medal (a well-deserved flex!), and an Olympic cardigan for himself. "The one thing that has kept me sane throughout this whole process is my love for knitting and crochet and all things stitching," he told followers on his Instagram knitting page @madewithlovebytomdaley.

Gianmarco Tamberi of Italy and Muta Essa Barshim of Qatar were head to head during the high jump event at the Olympic Stadium on August 1. Officials gave them the option to settle the tie with a jump-off; instead, they asked if they can just both be given Olympic golds. Turns out, it's possible. “I still can’t believe it happened. Sharing with a friend is even more beautiful. It was just magical,” Tamberi said as quoted by Time.

In most heteronormative cultures, a lot of things are prescribed to specific genders. But our local athletes broke free from gender stereotyping as they proved that women can excel in male-dominated sports like boxing, weightlifting, and skateboarding.

Pole vaulter EJ Obiena didn't clinch a podium finish during the finals round against 13 other athletes on August 3, but he impressed Filipinos with how he fought for his right to fair play. There were some discrepancies with the timer and the stability of the bar during his third attempt for the 5.80-meter run. Knowing that he's in the right, Obiena went up to the judges and the referee, and repeatedly said, "How can I jump if it's moving?" The officials confirmed what happened and he was given another chance after the heated discussion.

“I believe that is something that is a little bit left out. Us Filipinos are very timid. We are very ‘Yes po, yes po, yes po.’ But sometimes, you know [puwede rin] ‘Wait lang po puwede?’ Puwedeng ganun. ‘Wait lang po, may idea po ako’ or ‘Wait lang po, eto ‘yung tingin kong tama.’ I believe everybody should do it,” he told reporters a day after the game.

The Pride flag flies high at the Olympics

Then there's Petecio, who proudly dedicated her win to the LGBT community during an international press conference after her match. "I am proud to be part of the LGBTQ community. Sulong, laban," she told reporters in a post-match interview. This kind of visibility is important in a country where members of the LGBTQ+ community still have limited rights. It's also an inspiration for the younger Filipino LGBTQ+ generation to have great role models they can look up to.

Mental health in sports gets the attention it deserves

American gymnast and seven-time Olympic medalist Simone Biles shocked the world when she ended up withdrawing from the individual all-around gymnastics finals and the team finals. The athlete said that she was "having a little bit of the twisties," which is a mental block of sorts a gymnast experiences in which they lose control of their bodies. Her revelation highlights the importance of prioritizing mental health, too. As Biles put it, "We have to protect our minds and our bodies and not just go out and do what the world wants us to do."

Tokyo2020 Margielyn Didal Carlo Paalam Ej Obiena Hidilyn Diaz Eumir Marcial Adventurer Savvy Seasoned Nesthy Petecio Staying In Olympics Hard News Followup
Your Guide to Thriving in This Strange New World
Staying
In? What to watch, what to eat, and where to shop from home
OR
Heading
Out? What you need to know to stay safe when heading out