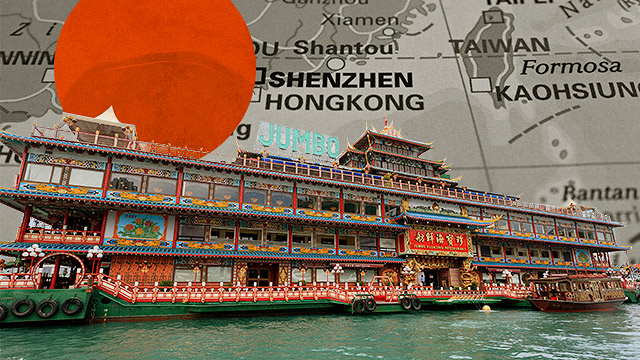 The Rise and Fall of Hong Kong's Jumbo Floating Restaurant

They also opened Jumbo Kingdom Manila in the '90s.

(SPOT.ph) Hong Kong, as a tourism hotspot in Asia, is well known for its shopping districts, theme parks, and food haunts. At one point in time, it also boasted of the Jumbo Floating Restaurant, a massive and ornately decorated dining spot which served Cantonese cuisine afloat the Aberdeen Harbour. But after 44 years of operation, it was forced to close its doors in 2020 at the height of the COVID-19 pandemic. Two years later, the boat-turned-restaurant made the headlines after it capsized in the South China Sea on June 19.

While Jumbo Floating Restaurant is the more known component of Jumbo Kingdom, there was also the adjacent Tai Pak Floating Restaurant. The latter was the one first established in 1952. Businessman Wong Lo-Kat bought a wooden boat in the '50s and transformed it into a 105-foot floating restaurant, which was extended six years later to accommodate up to 800 diners.

With the success of the first one, Wong established a second restaurant in the harbor, which became the more popular Jumbo Floating Restaurant. Unfortunately, the giant vessel caught fire in an incident that resulted in the deaths of 34 people. With no means for further investment, Wong sold the property to Macau casino tycoon Stanley Ho Hung-sun. Jumbo Floating Restaurant officially opened in 1976.

Over on our seas, you may be familiar with the Sea Palace, which was brought from the Aberdeen Harbour to the mouth of Manila Bay (near what's now Harbour Square within the CCP Complex). Rebranded as the Jumbo Kingdom Manila, the floating restaurant was in operation in the Philippine capital from 1999 to 2008. If you grew up in the 2000s, then chances are you have a family picture with it in the background.

But back to HK: The Jumbo Kingdom went through major renovations in 2003, a year after operations were led by the Melco International Development. This cost them HK$30 million as the entire 76-meter-long and three-story-high floating restaurant was designed to look like an ancient Chinese imperial palace. It could seat up to 2,300 diners at a time.

The adjacent Tai Pak Floating Restaurant was in Love Is a Many-Splendored Thing (1955) and Enter the Dragon (1973).

The Fall of Jumbo Floating Restaurant

At the height of the COVID-19 pandemic in 2020, international borders were closed to tourists, and business establishments were also closed to local residents. The huge restaurant had to let go of all its staff. On top of losing income, the massive restaurant still had to go through regular inspection and maintenance even if it was not in operation. Aberdeen Restaurant Enterprises Limited, in a statement, said that this has become a financial burden to its shareholders.

Jumbo Floating Restaurant was towed out of Hong Kong on June 14; five days later, it capsized near Paracel Islands in contested waters after experiencing bad weather. The Paracel Islands are part of the disputed maritime territory between the Philippines, Vietnam, China, and Taiwan.  The boat sank more than 1,000 meters (3,280 feet), making salvage work "extremely difficult," according to Aberdeen Restaurant.