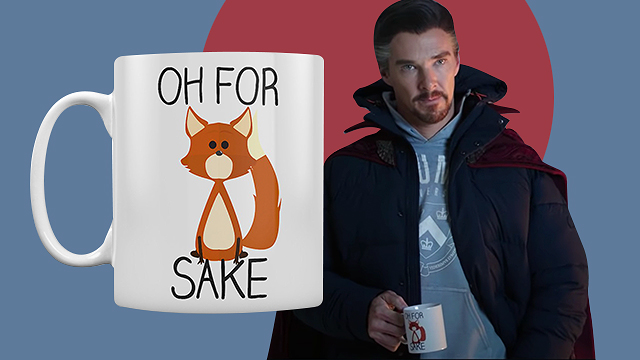 We know where you can get it!

(SPOT.ph) Today, August 24, Marvel finally released the highly anticipated Spider-Man: No Way Home trailer—just a day or so after a supposed leak—and comic book geeks and superhero fans everywhere are freaking out! The trailer for the third installment in the Marvel Cinematic Universe's version of Spider-Man had some pretty crazy moments, but one tidbit fans can't seem to get over is this: The arguably masculine and seemingly pragmatic Doctor Strange (played by Benedict Cumberbatch) can be seen holding a drink in a cute mug that reads "oh for 'fox' sake" with a cartoony illustration of a fox in place of the word itself. Yes, that's right, Stephen Strange has the same taste in drinkware as a Caucasian woman who unironically likes to decorate her home with the phrase "live, love, laugh." Dare we say... he might be a little cheugy?

As you might expect, the Internet can't get enough of the sight of a time-bending, all-powerful superhero holding the kind of ceramic find you might see on Etsy—the juxtaposition is too funny to ignore, we can't help but wonder who in Marvel Studios' production team made the decision to include the mug in the shot. We'd go so far as to speculate that they wanted it to turn into a meme.

Here's what Twitter had to say about Doctor Strange's now-viral "oh for 'fox' sake" mug:

All the amused reactions on Twitter were quickly accompanied by folks saying they wanted to cop the mug, too and we totally get it. In fact, we did some hardcore sleuthing and found out that the piece is originally from a U.K.-based shop called Grindstore where it retails for £4.99 (roughly P343). You'll also see the mug available at American grocery chain Walmart, though priced at U.S. $19.99 (roughly P1,001). Given that Stephen Strange resides in New York City, we'd venture to guess that he probably picked up his cup on a quick grocery run at Walmart.

Now, if you scour the web, we're sure you'll find many iterations of this subtly ill-mannered phrase—it's more than likely that the originator of the pun is hidden somewhere deep in the recesses of the hipster-obsessed Tumblr posts of the early 2010s. With that in mind, you're sure to find many different designs featuring the quote (fox drawing and all), but if Doctor Strange's exact mug is what you're eyeing, look no further. Good news is Grindstore ships worldwide!

You can shop the Oh For Fox Sake Mug on Grindstore's website.

Shopping Savvy Adventurer Seasoned Staying In Online Shopping Marvel Marvel Cinematic Universe Doctor Strange Spider-man Mugs Viral Grindstore Topspot Shopping
Your Guide to Thriving in This Strange New World
Staying
In? What to watch, what to eat, and where to shop from home
OR
Heading
Out? What you need to know to stay safe when heading out