A Hot Air Balloon Festival is happening in March 2020 in Clark
Loading
Already a member? Log in
No account yet? Create Account
Spot.ph is your one-stop urban lifestyle guide to the best of Manila. 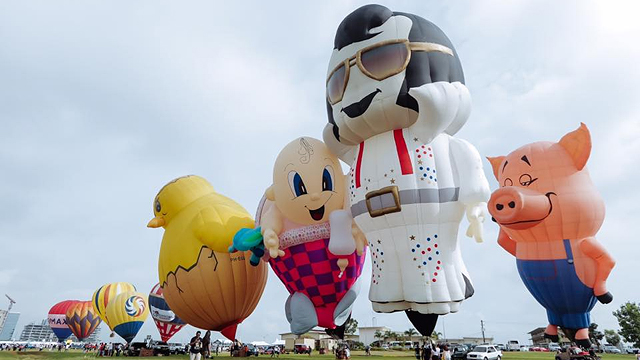 In case you're from the north!

(SPOT.ph) While the Philippine International Hot Air Balloon Fiesta (a.k.a. "longest-running aviation event in Asia") has found a new venue in Carmona, Cavite, for their 2020 edition, another hot air balloon event is set to take place in Pampanga. Aurora 2020: Food and Music Festival, Hot Air Balloon Display, and Night Glow runs from March 13 to 14 in Clark Global City, Clark Freeport Zone. Tickets are at P350.

Aurora 2020, which is organized by Epic Events with the support of Clark Global City and Clark Development Corporation, features performances by some of the most popular bands and musicians in the country, including Ben & Ben, IV of Spades, and Unique Salonga. The hot air balloon display starts at 2 p.m. and lasts until 7 p.m. on both days; while the food festival and bazaar are until midnight.

This event is not to be mistaken for the Philippine International Hot Air Balloon Fiesta (PIHABF), which has been around since 1994. It has always found a home in the skies of Pampanga, except in 2019 when the event was cancelled "because PIHABF [had] not received commitment from [their] government partners on time," according to a statement. The group also emphasized that any other ballooning event not announced on their channels are not organized by the PIHABF Foundation, "which bears an uncompromising track record of ensuring the safety of pilots, participants, and viewers."

In a statement on January 6, Clark Development Corporation (CDC) clarified that "it has not approved the conduct of any hot air balloon event inside Clark for the year 2020" and that they "would like to caution the public against any representation that solicits support for business and other purposes." But Visit Clark, CDC's tourist information center, announced on February 5 that Aurora 2020 is officially happening in Clark.

Aurora 2020 will be on March 13 and 14, from 2 p.m to 12 a.m. in Clark Global City, Clark Freeport, Pampanga. Tickets, which are priced at P350, are available through SM Tickets. For more information, follow Clark Hot Air Balloon Music, Arts and Food Festival on Facebook.