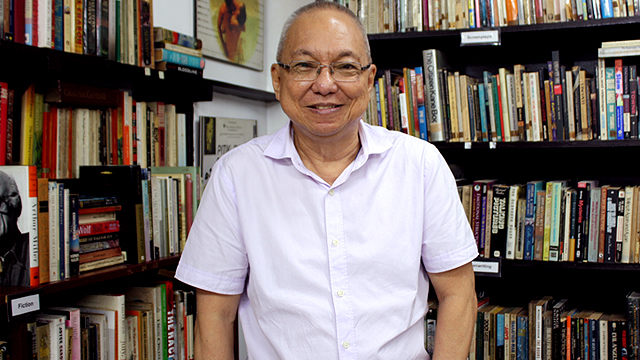 You can apply until March 27!

(SPOT.ph) When award-winning writer Ricky Lee announced applications for his scriptwriting workshop in 2016, about 2,000 people went through the screening process on the University of the Philippines' Diliman campus despite a bomb scare earlier in the day. We can't blame them—this was, after all, the much-awaited revival of his personal workshop after a 14-year hiatus. Four years later, Lee is still facilitating the three-month session held every Sunday at his residence in Quezon City—and, in between, he's offering free lessons online while everyone's stuck at home amid the COVID-19 pandemic.

The online Ricky Lee Film Scriptwriting Workshop will be held on April 8, 15, and 22. Since lessons include discussions on the basics of scriptwriting and feedback about your own piece, the number of participants is limited to only 50 fellows. To apply, you can send a letter of intent and writer's bio to banalramel@gmail.com. You must be at least 18 years old and a Filipino citizen. Deadline of application is on March 27 at 11:59 p.m.

Lee has written more than 160 scripts since he started in 1973. He wrote the screenplays of Karnal (1983), The Flor Contemplacion Story (1995), Bulaklak ng Maynila (1999), Anak (2000), Mila (2001), and a lot more. Apart from being a screenwriter, Lee is a fictionist, playwright, and essayist. Among the books he has published are the scriptwriting manual Trip to Quiapo, the anthology Si Tatang at Mga Himala ng Ating Panahon, the playbook Pitik-Bulag Sa Buwan Ng Pebrero, screenplay books like Brutal/Salome (the first of its kind in the Philippines), and the novels Para Kay B (O Kung Paano Dinevastate ng Pag-ibig ang 4 out of 5 sa Atin) and Si Amapola sa 65 na Kabanata.

Lee has also worked on television dramas such as Mangarap Ka, Maging Sino Ka Man, and Magkaribal as creative manager for ABS-CBN. Lee has been holding free scriptwriting workshops since 1982, producing hundreds of graduates who are now part of the movie and TV industry like Lav Diaz, Jeffrey Jeturian, Jerry Sineneng, Vincent de Jesus, and Leo Abaya.

Writing Workshop Ricky Lee Free Things To Do Adventurer Savvy Seasoned Tpc-000001
Your Guide to Thriving in This Strange New World
Staying
In? What to watch, what to eat, and where to shop from home
OR
Heading
Out? What you need to know to stay safe when heading out