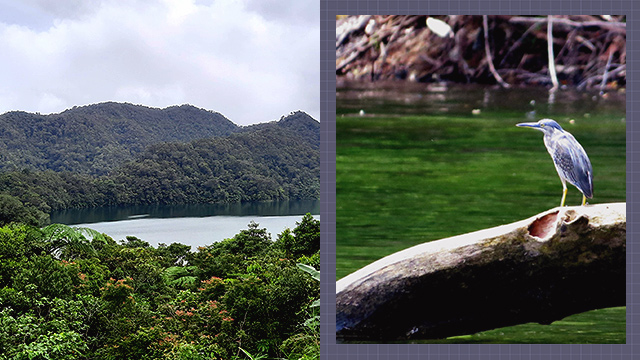 This Mystic Crater Lake in Negros Is Home to Endemic Wildlife

Plus, giant ferns you thought you can only see in Jurassic Park.

(SPOT.ph) With the Philippine's patchwork of islands, variety of terrain, expansive rainforests (at least, back in the day), and tropical location, it is no wonder that our country is considered "a mega-diversity country," according to the Department of Environment and Natural Resources' Biodiversity Management Bureau. Only a few countries in the world have this status. Plus, we also have a high degree of endemism, which means that most of our flora and fauna are only found here and nowhere else.

While most of the plains have been transformed into urban centers, our waters into reclaimed land, and other expansive lands into roads, there are still—fortunately—more than 200 national parks and protected areas where these endemic plants thrive and animals run wild. One of such enchanted places is Balinsasayao Twin Lakes Natural Park in Negros Oriental. It features Lake Balinsasayao and Lake Danao, which are both crater lakes sitting amid the Mount Talinis (a.k.a. Cuernos de Negros). The whole park extends through the municipalities of Valencia, Sibulan, and San Jose.

Also read:
The SPOT.ph Guide to Dumaguete City
This School By the Sea Has Front-Row Seats to a Poetic Dumaguete Morning

Lake Balinsasayao and its smaller counterpart Lake Danao are believed to be formed by a volcanic eruption and tectonic movement in the Mount Talinis range, which is a complex volcano composed of several cones and peaks. It's listed as "potentially active" so you can still see sulfuric gas coming out of steam vents along the ride as you drive to the lakes or see red volcanic rocks around the nearby Red Rock Hot Spring.

It was declared a protected area by virtue of Republic Act No. 7586, which was signed by former President Joseph Estrada in 2000. The park encompasses up to 8,016.05 hectares of dipterocarp forests, the twin lakes, the smaller Kabalin-an Pond, Ulayan Falls, and Kang-untol Falls.

Before reaching the twin lakes, the first thing that visitors see is the Kabalin-an Pond since it is right beside the natural park's information center. The swamp has trees that grow in freshwater, which are called Indian willow. It is native to the south and southeastern Asia, such as India, Pakistan, Bangladesh, Nepal, Laos, Thailand, and the Philippines.

Between the bodies of water is the dipterocarp forest, which is home to more than 100 bird species, most of which can only be found in the Philippines (or, more locally, within the Visayas). You may chance upon the Visayan flowerpecker, Negros bleeding-heart pigeon, Visayan tarictic hornbill, Negros striped babbler, and Philippine cockatoo while hiking through the forests, riding a boat across Lake Balinsasayao, or even just hanging out at the observation deck.

All in all, the Balinsasayao Twin Lakes Natural Park serves as sanctuary to 427 critically endangered, endangered, and vulnerable species of plants and animals. The whole area ranks second to Palawan in terms of biodiversity.

Roughly an hour away from the provincial capital of Dumaguete City, Balinsasayao Twin Lakes Natural Park is easily reached by a van, which can traverse the steep roads of Mount Talinis range. Better not sleep while you’re on the uphill climb as the surrounding forest is already a sight to behold. Traveling on wheels stops at the Balinsasayao Twin Lakes Restaurant, which also serves as a view-deck for birdwatchers and photographers. From there, you can walk down a paved road until you reach Lake Balinsasayao—where you can ride a boat for an hour and enjoy the tranquility of the space. You can also cross the like and hike for an hour to reach Lake Danao.

AirAsia is the latest airline to service passengers from Metro Manila to Dumaguete City. Flights are scheduled four times a week: every Monday, Wednesday, Friday, and Sunday—all at 7 a.m. The return flights to Manila are on the same days at 9:05 a.m.