Best Public Parks and Open Spaces to Visit in Manila City
Loading
Already a member? Log in
No account yet? Create Account
Spot.ph is your one-stop urban lifestyle guide to the best of Manila. 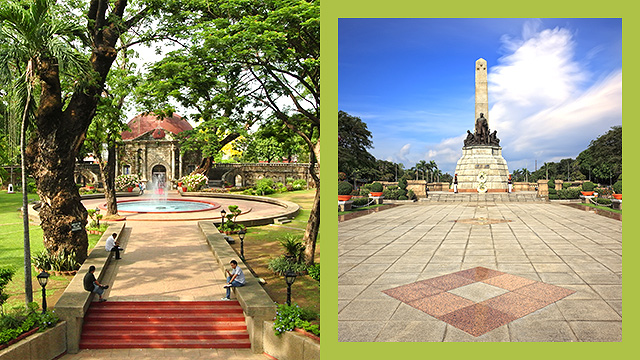 Open Spaces in Manila for When You Want to Take a Good, Long Walk

(SPOT.ph) With physical distancing one of the main safety measures against transmission of COVID-19, the presence of open spaces in our congested cities is a welcome respite. Thankfully, a handful of public parks have remained; and for those who really want to get out of the house even just for a while, the City of Manila has a few Spanish-era plazas, green courtyards, and even a forest reserve where you can hang out—as long as you wear your face mask and face shield and keep your distance from other people.

Want to take a walk? Check out these places to visit in Manila City:

The 67-hectare Intramuros is home to Spanish-era churches, government buildings, schools, and a few surviving monuments and statues. While gated areas (like Fort Santiago) within the Walled City have yet to open amid current quarantine measures, you can walk around Plaza Sampalucan, Plaza Roma in front of the Manila Cathedral, Plazuela de Sta. Isabel, and Fray Andres de Urdaneta Garden. Under general community quarantine rules, Gates 9 (near Letran), 10 (Bayleaf), 7 (near Magallanes Drive), and 4 (near Ayuntamiento) are open from 6 a.m. to 7 p.m.; while Gates 3 (near Manila Cathedral) and 11 (near Pamantasan ng Lungsod ng Maynila) are open 24/7.

Rizal Park, formerly known as Bagumbayan, is not only that space where the Rizal Monument stands. The sprawling 58-hectare urban park also features the Children's Garden at the southeastern corner, the Chinese Garden with its ornate Chinese-style gate, the Japanese Garden with a lagoon and a bridge, and the Noli Me Tangere Garden that features a fountain donated by Germany, said to be one that Rizal would drink from during his stay there.

Located on the corner of San Marcelino and General Luna Streets in Paco, Paco Park was a cemetery built for Manila's elite in the 19th century. The space is now often used for weddings (the St. Pancratius Chapel is inside the park) and pre-nuptial shoots because of its verdant surroundings. On most days, the park is open for people who just want to take in some greenery.

Mehan Garden, originally established as Jardin Botanico by the Spaniards in 1858, was transformed into a public park during the American occupation. It was reopened to the public in 2019 following cleaning operations, installation of lighting, and rehabilitation.

Arroceros Forest Park, which is often dubbed the "last lung of Manila," was a greening project initiated by members of Winner Foundation in collaboration with former Manila mayor Alfredo Lim and then first lady Amelita Ramos in 1993. The 2.2-hectare riverside park boasts native trees such as the red balete, bagras, bitaog, narra, and molave and pathways where visitors can just stroll around while surrounded by towering canopies. The Arroceros Forest Park, however, has been in constant threat as the local government is handed off from one mayor to another. Current Manila mayor Isko Moreno in March declared Arroceros as a "permanent forest park" that will have regular maintenance and preservation through funding from the city government.

Places To Visit Manila Manila Parks Metro Manila Adventurer Savvy Greener
Your Guide to Thriving in This Strange New World
Staying
In? What to watch, what to eat, and where to shop from home
OR
Heading
Out? What you need to know to stay safe when heading out