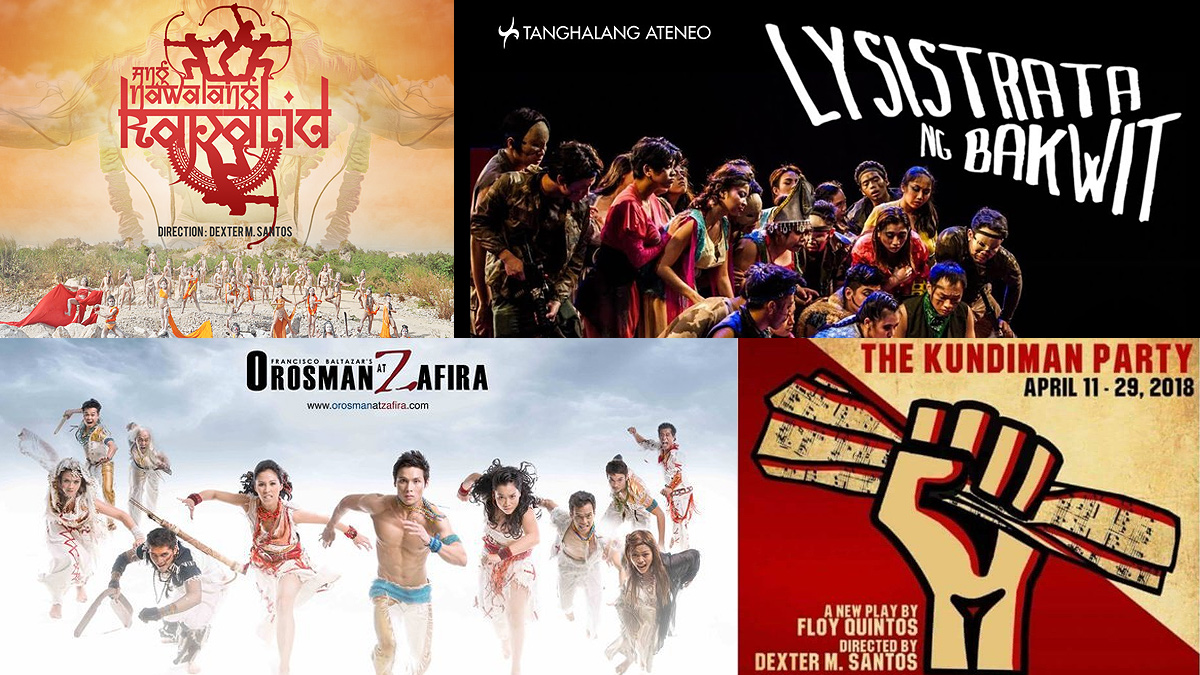 10 Filipino Plays and Musicals You Can Stream For Free

(SPOT.ph) If there’s one thing that we’re sure about when it comes to theater-going after the pandemic, it’s that online streaming will be a viable option for theater companies. We know, we know: It’s not the same as watching a play or a musical live and seeing the magic of turning an otherwise empty stage into a completely different world. As we wait for this pandemic to end, a number of all-original Filipino plays and musicals have been made available to stream for free to tide us over. The best thing about it: Most of these are online indefinitely!

Check out these local theater shows you can stream for free on YouTube:

On the surface, The Kundiman Party is a nostalgic ode to the Filipino tradition of the kundiman—a genre of love songs that are meant for serenading. But, as with most great stories, it also tackles one of the most relevant themes in today's generation: the place of art in contemporary society. The play follows retired singer Maestra Adela Dolores (Shamaine Centenera-Buencamino)—who believes in the transformative power of the kundiman—and young, tech-savvy activist Bobby (Kalil Almonte) in an eccentric form of protest. The Kundiman Party premiered in April 2018 at the University of the Philippines, and was restaged in May 2019 at the PETA Theater Center.

Layeta Bucoy's Lolo Doc appears as a captured online chat between a senior doctor serving in the frontlines amid the COVID-19 pandemic and his family. This commitment to save people's lives becomes far more important than his own self. The monologue is performed by Tanghalang Pilipino's artistic director and respected theater artist, Fernando “Nanding” Josef. Lolo Doc premiered on May 6.

Set in 1907, Aurelio Tolentino’s Bagong Cristo follows the story of Jesus Gatbiaya (Boo Gabunada). He is a labor union leader whose words and teachings inspired his fellow laborers to seek social justice and equality. This proletarian reinterpretation of the story of Jesus Christ is directed by Dulaang UP's former artistic director, Alexander Cortez. It premiered at the Wilfrido Ma. Guerrero Theater in April 2017.

Stream it on: UP College of Arts and Letters’ YouTube channel

The first couple of runs of Orosman at Zafira by Francisco Balagtas was at the Wilfrido Ma. Guerrero Theater in 2008 and 2010. In 2011, it was staged for a wider audience at the SM Mall of Asia CenterStage Theater; then at the Cultural Center of the Philippines in 2012. If you missed any of these runs, the classic is available on Dulaang UP's YouTube channel. Balagtas' piece follows the power struggles among three kingdoms: Marueccos, Tedenst, and Duquela—and the resulting cycle of war. It is directed by Dexter M. Santos.

Ang Nawalang Kapatid, which was a highlight of Dulaang UP's 38th theater season in 2014, is a well-received musical adaptation of the great Indian epic The Mahabharata. It was written by Floy Quintos with original music by Ceejay Javier and direction by Dexter Santos. The show's outstanding reviews earned it a restaging in the following season.

Lysistrata ng Bakwit, which inaugurated Areté's Doreen Black Box Theater in April 2018, is an adaptation of Aristophanes' Greek classic Lysistrata. The piece, written by Tanghalang Ateneo's Sabrina Basilio and Gerald P. Manuel, is set in an imaginary war-torn Philippine province where women evacuees fight for their ancestral lands and commit to stop the ongoing calamity.

In 2013, Dulaang UP staged Vlad Gonzales' retelling of the Filipino epic Ibong Adarna, which tells the quest of three princes in search of the mythical bird believed to cure their ailing father. The production features not only a long list of thespians—including JC Santos, by the way—but also showcases shadow play and puppetry. It is directed by Jose Estrella.

Most of us grew up fearing our father's belt or mother's many plastic hangers, especially if we knew that we did something wrong. But child psychologists say that these forms of physical punshment may be a problematic form of discipline. Liza Magtoto's Rated: PG looks at how positive discipline reinforces the psyche of a child. It is directed by Mae Quesada-Medina with music, lyrics, and musical direction by Vincent de Jesus.

Dolorosa by Tanghalang Ateneo alumnus Peter Zaragoza Mayshle revolves around a statue of the Virgin Mary that has belonged to an old family in Laguna for three generations: the Spanish colonial era, the Japanese war, and the 2000s. It is top-billed by Bibeth Orteza and directed by Jenny Jamora. Dolorosa was staged at the Areté in August 2019.

Streaming Roundup Theater Play Musical Adventurer Savvy Seasoned Guide
Your Guide to Thriving in This Strange New World
Staying
In? What to watch, what to eat, and where to shop from home
OR
Heading
Out? What you need to know to stay safe when heading out