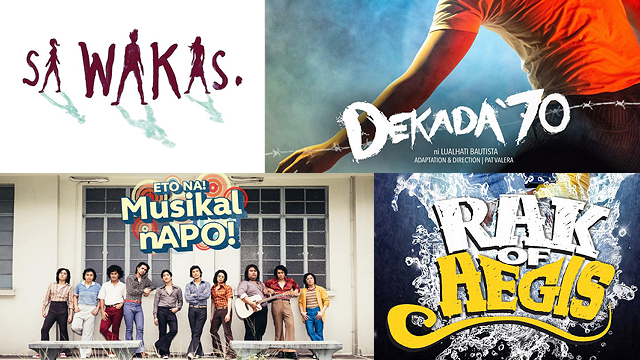 We're praying to the theater gods.

(SPOT.ph) If there’s anything good about being stuck at home, it’s that people seem to have a renewed interest in consuming art. Online art exhibitions are now a thing, critically acclaimed movies from film festivals are being streamed online, concerts are relayed from one’s basement to millions of computer screens, and captured performances of theater shows are being played back for free. On the second weekend of May, two million Filipinos reportedly watched the limited online release of Ang Huling El Bimbo—something unheard of in Philippine theater.

Unfortunately, the arts is also one of the last fields that will see a return to a semblance of normalcy. And while we wait for the day that the curtains can rise once again, we'll wait for these companies to put their shows online.

Also read:
10 Plays and Musicals You Can Stream Right Now
10 Ways Theater-Going Will Change After the Pandemic

We're keeping our fingers crossed for these Filipino musicals that we hope to stream soon:

Written by Ina Abuan and Andrei Pamintuan, this Pinoy rock musical first made fans cry in April 2013. The heartbreaking musical follows the love story of Topper and Lexi, whose long-term relationship takes a different turn when a third party comes into the picture. It's all told through the tear-jerking songs of Sugarfree. You can sing along to your favorite Ebe Dancel tracks like "Bawat Daan," "Ikaw Pala," and "Prom," all given a "Broadway-fied" arrangement by Philstage Gawad Buhay awardee Ejay Yatco. It was again staged in January 2017 and April 2018.

9 Works Theatrical's Eto Na! Musikal nAPO! was one of our favorites during the 2018 theater season. It is a heartwarming look back at the '70s, made even more enjoyable through the lyrics and music of legendary local musical group APO Hiking Society. It's proof that great jukebox musicals come from the marriage of hit songs and a well laid-out story, and one shouldn't be more important than the other. Add this to the universality of the themes that the Robbie Guevara script touches on, and you have a nostalgic show that even younger generations can relate to. The show went back onstage in February 2019.

So successful was Rak of Aegis that it racked up a total of seven seasons and more than 300 shows since it premiered in January 2014. It was practically an annual tradition by the Philippine Educational Theater Association—something pretty unusual in Philippine theater. The jukebox musical uses songs from '90s band Aegis such as "Luha" and "Basang-Basa sa Ulan" to tell the story of Aileen, who dreams of escaping her perpetually flooded town with her family. It may be inspired by the events of tropical storm Ondoy that hit the Philippines in 2009, but the themes of corruption amid a crisis remains a struggle that needs to be told.

This ethno-epic musical’s limited run in December 2019 left the audience asking for more. Wishes were supposed to come true with a planned restaging in August, but we all know that’s not happening now amid the COVID-19 crisis. Lam-ang marked the musical debut of JC Santos, who has had his share of playing various roles onstage through Dulaang Unibersidad ng Pilipinas.

Himala: Isang Musikal, which was penned by Ricky Lee and Vincent de Jesus for music and lyrics, respectively, was first staged by Tanghalang Pilipino at the Cultural Center of the Philippines in 2003. It was later produced by The Sandbox Collective and 9 Works Theatrical in February 2018 and September 2019, which both starred Aicelle Santos. The piece follows the story of Elsa (played by Nora Aunor in the original movie) who becomes known for seeing an apparition of the Blessed Virgin Mary and being able to heal the sick in their small town of Cupang.

3 Stars and a Sun, which was staged in February 2016, is a dystopian science-fiction production told through the songs of Francis Magalona. It's a rap musical that includes the Master Rapper's greatest hits like "Mga Kababayan" and "Kabataan para sa Kinabukasan." Set in the 2080s in the futuristic Pinasland, its conflict arises from two rival gangs—one from the affluent neighborhood called Lumino City and the other from the slums of Diliman City. It was written by Mixkaela Villalon and Rody Vera.

Excerpts from Mabining Mandirigma—which has had four stagings since 2015—are currently streaming through Tanghalang Pilipino's YouTube page, but there's still public clamor for a full show. After all, where else can you find a steampunk musical that also teaches a history lesson? It tells of the heroism of Apolinario Mabini, who—in this play, was interestingly played by a woman—and brings to light the struggle of the hero reductively dubbed as the "sublime paralytic" as he envisions a different kind of revolution during the Philippine war against Spanish and American colonization.

Based on Lualhati Bautista’s novel of the same title, this Pat Valera original tells the story of how a middle-class family chose not to turn a blind eye to what was happening in the country under former dictator Ferdinand Marcos' regime. Its meaningful lyrics are arranged in various musical styles, from rap to ballads. Dekada '70 first ran at Ateneo de Manila University's Doreen Black Box Theater in September 2018. It had back-to-back sold-out runs in February, and was supposed to have four more shows before the theaters were shuttered for quarantine.

Vincent de Jesus' Changing Partners was first staged in 2016 through a dramatic reading that was followed by a full production in the same year. It went on to become an award-winning film in 2017 before another restaging at the PETA Theater in May 2018. The anti-romcom presents four relationship permutations between an Alex and a Cris—an older man and a younger woman, an older woman and a younger man, an older man and a younger man, and an older woman and a younger woman. What makes the theatrical form magical is Director Rem Zamora's seamless switching and critical blocking of the cast members, immersing the audience in a world where love and pain swirl in one giant unavoidable mess. De Jesus held an online script reading of the musical on May 16, but we’re keeping our fingers crossed that a recorded performance by Agot Isidro, Jojit Lorenzo, Sandino Martin, and Anna Luna will also be available soon.

Mula sa Buwan, another forerunner in a list of Philippine theater's best musicals, enjoyed three runs from 2016 to 2018. Since then, we've just gotten bits and pieces of the show: a one-night-only musical concert in October 2019, an online streaming of a few scenes in April, and a playback of the musical concert's highlights starting on May 16. While there’s confirmation that Mula sa Buwan is returning to the stage in 2021, it would be nice to see the piece again and again while we’re stuck at home. The Pat Valera creation draws inspiration from Edmond Rostand's Cyrano de Bergerac, where Cyrano secretly falls in love with Roxane who happens to be his best friend's biggest crush.

Tpc-000001 Musical Theater Filipino Philippines Adventurer Savvy Seasoned Mula Sa Buwan Changing Partners Mabining Mandirigma 3 Stars And A Sun Himala Lam Ang Rak Of Aegis Eto Na Musikal Napo Sa Wakas Streaming Roundup
Your Guide to Thriving in This Strange New World
Staying
In? What to watch, what to eat, and where to shop from home
OR
Heading
Out? What you need to know to stay safe when heading out