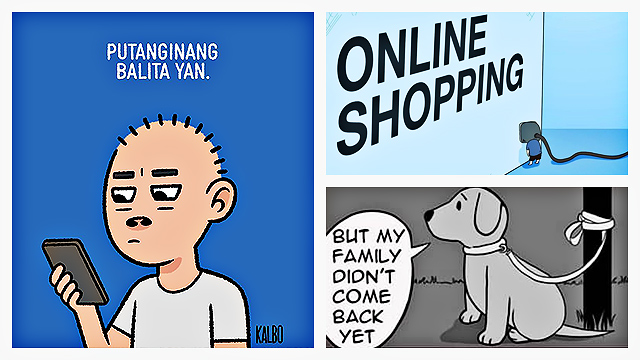 10 Relatable Webcomics That Are Both Funny...and Not

These panels hit close to home.

(SPOT.ph) Not all comics are created equal. Some are funnier than others, some have storylines that hit close to home. But there are intentionally sadder works than the rest that punch us in the gut about the harsh realities of everyday life. We know, we know: Why would anyone want to read distressing comics? The thing is, our feelings are sometimes best articulated by colorful illustrations and spot-on thought balloons.

Also read:
Need a Laugh? Check Out These 10 Hilarious Webcomics
10 Pinoy Web Comics You Should Follow Online
10 Pinoy Comic Artists That Will Add Some Fun to Your IG Feed

Check out these 10 sad webcomics that would make you want to hashtag #same:

Tarantadong Kalbo, which was started in July 2019 by Filipino artist Kevin Eric Raymundo, touches on the many national issues that upset Filipinos on a daily basis. "P*t*nginang balita 'yan," says one panel—and we can all relate. It also features commentaries on how the Philippines is "flattening the curve" (spoiler: it is not), the probe on Maj. Gen. Debold Sinas' “mañanita,” and the ongoing quarantine.

The name says it all! Eat the Rich is a phrase attributed to Jean-Jacques Rousseau: "When the people shall have nothing more to eat, they will eat the rich." This webcomics try to make a funny-but-true commentary on capitalism, inequality, and other problems brought about by aristocracy.

"Comics na puro kakornihan," reads the description of Komik Guy on Facebook. You'd find comics ranging from random lutang moments to reminiscing the good ol' days of Facebook games and "gifting." The panels above reflect what some of us are going through this quarantine period: that working from home is not as fun as it sounds.

Have a box of tissue on hand when you start scrolling through Hey Buddy Comics, which comes out with new posts every Tuesday and Friday. The story follows Buddy and his "hooman" as they deal with alien encounters, support "Black Lives Matter," and meet new friends. Once in a while, we're treated to heart-wrenching stories of what Buddy might be thinking when his owner is depressed or when the "hooman" is away for a while.

Dolby, the Giant by Arthur Dewberry, follows—well—Dolby and his one-eyed friend Spencer. The boy with thick-rimmed glasses sometimes asks the most depressing questions: "Why do we die?", or "Do you ever lie in bed and think about all the cringey things you've ever said?"

Sskait Comics posts "stories of life, happiness, and random somethings" every Sunday. Expect to see relatable scenes of staying up until 3 a.m. to chat with your crush, shopping online to "relax your mind," and playing Candy Crush. We think "Ang istorya ng feels sa buhay nating lahat" is a very apt self-description.

This series is "for people who want to experience the funnies once in a while;" at other times, expect intentionally not-so-funny ones. It deals with news (mostly bad, of course), existential crisis, and finding validation in this world.

We've all heard of romantic quotes of how the brain doesn't always agree with the heart. The Awkward Yeti by Nick Seluk is about that, minus the romanticized version of it all. We see the brain (with ridges) arguing with the heart (valves and aorta included) about procrastination, mental health, shopping, positive-thinking, and everything in between. Sometimes, the tongue and stomach also drop by as main characters.

You've probably seen the sad story going viral on your feed: the Grim Reaper having a conversation with the soul of a black cat, or a sea turtle, or a dog. It's hard not to cry, especially after scrolling through the panels and finding out how these creatures still remained loyal and trustful to humans despite being abandoned or left for dead.

At the center of Poorly Drawn Lines are poorly drawn (but very relatable) illustrations of a chicken, a bird, a cat, a rat, and a weird bear in the city. We see them trying to figure out the meaning of life (and the absurdity of it all): "Nothing good will ever happen again," the rat exclaims. Still true after 12 seconds.