Best Old Photos of Art in the Park Makati From 2010 to 2019
Loading
Already a member? Log in
No account yet? Create Account
Spot.ph is your one-stop urban lifestyle guide to the best of Manila. 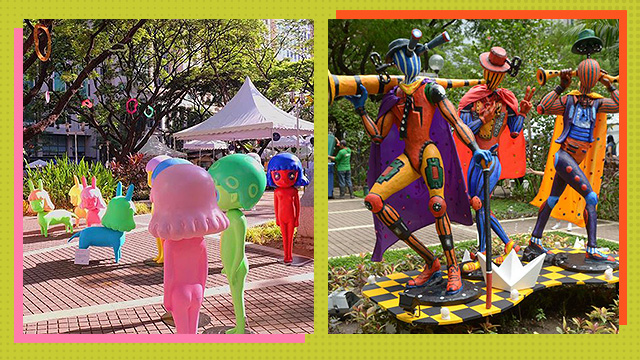 Art in the Park Through the Years: A Look Back at the Most Unforgettable Installations

The affordable art fair is celebrating its 15th anniversary this year.

(SPOT.ph) Art in the Park, which is regarded as Art Fair Philippines' more affordable counterpart, is celebrating its 15th anniversary through an online fair from February 21 to 28. Since it was founded in 2006, the annual event has always showcased a diverse group of works from young artists, student organizations, and independent art spaces in a number of booths inside Jaime Velasquez Park at Salcedo Village in Makati City. Between a spread of pottery on a patch of grass and cotton-candy vendor, massive installations serve as centerpiece of previous editions.

Also read: Mark Your Calendars: Art in the Park 2021 Is Happening Next Month

Take a trip down memory lane as we look back at the most notable displays at Art in the Park:

Art in the Park 2020 was one of the first art events that was postponed because of the COVID-19 pandemic. Initially scheduled for March 15—just two days before a Luzon-wide quarantine, it was moved to August as an online week-long edition. Still featured as the main show is Dex Fernandez' "Garapata Hatchery," which was displayed as a time-lapse video where the artist gave us a glimpse of his creative process. He also created a special paper mural separated into 22 works that viewers can see at the end of the clip.

"Alone but Not Lonely" by Yeo Kaa

Yeo Kaa's pink-colored inflatable "Alone But Not Lonely" was on display near the entrance of Jaime Velasquez Park during the 2019 edition. The sculpture, which showed a pink-colored girl holding an emotional support goat (based on the artist's own stuffed goat toy), was previously mounted at Yavuz Gallery in Singapore prior to Art in the Park. It was also surrounded by other giant figures that were part of her "Wud Ya Do It" show.

Ma. Athela B. Tamoria (a.k.a. Tekla) presented her paper installation called "Colony," which featured her signature style of making hexagon-shaped holes out of folded paper to form a half-sphere. These beehive-like creations adorned the park's trees and projected geometric shadows on the pavement of Salcedo Park.

"Bag in a Boat" was a thesis project by UP College of Fine Arts student Carzen Esprela. The piece was 14 feet long so it was hard to miss at the park's entrance.

"Ars Longa, Vita Brevis," which was after Hippocrates’ quote "Art is long, life is short," was a collection of wax figures with candles inside their heads. A take on the elusiveness of life and the legacy of art, the sculptures melted as the Art in the Park day went on.

The live mural by Cavity Collective was a big hit among visitors of Art in the Park in 2015.

"Death of a Salesman (The Wolves Part 1)" by Maxine Syjuco

"Subterranean Blues," which was made of fiberglass, depicted an image of death. It was hard to miss, especially with the dark-colored skeleton figure rowing a boat reminiscent of ferryman Charon transporting souls of the dead across the River Styx.

Charlie Co played with the concept of chess in "Checkmates." But instead of the usual black-and-white board, he went crazy with colors to show three figures that embodied the proverbial principle "see no evil, hear no evil, speak no evil."

Known for his mystic and sci-fi installations, Leeroy New "infested" Salcedo Park's trees with his own rendition of the "Balete." The bright-colored work caught the audience's attention even late at night at the park.

White-colored swings hung from a tree at Jaime Velasquez Park during Art in the Park in 2010. Aside from providing a play area for kids, the work showed a place of solace and silence.

Art In The Park Makati Staying In Adventurer Savvy Seasoned Art Greener
Your Guide to Thriving in This Strange New World
Staying
In? What to watch, what to eat, and where to shop from home
OR
Heading
Out? What you need to know to stay safe when heading out