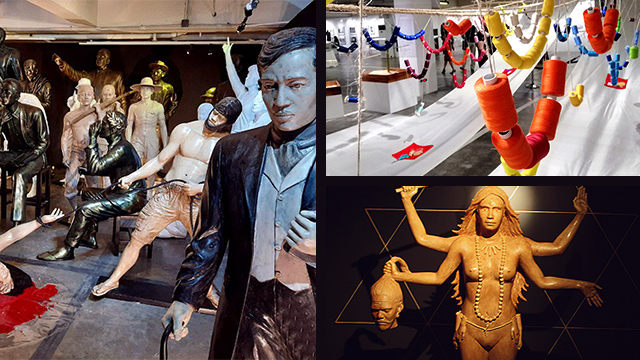 As we count the days before the big opening of ArtFairPH 2021!

(SPOT.ph) Art Fair Philippines, which has been dubbed the Metro’s biggest art event, has been wowing art enthusiasts here and abroad since its inception in 2013. It started out as a three-day event on one floor of The Link’s parking space, then eventually expanded to four days on four available floors of the seven-storey building. For 2021, Art Fair Philippines is moving to the digital space where everyone is free to view art by local and international artists for 10 whole days from May 6 to 15.

Also read:
Art in the Park Through the Years: A Look Back at the Most Unforgettable Installations

As we count the days before the big opening, we look back at some of our favorite Art Fair Philippines installations:

Salvador Joel Alonday's “Brown Study: The Wanderings of Juan Pikas” was a tableau of life-sized sculptures retelling the story of Visayan folk character Juan Pikas. Legend has it that he was born with one leg, one arm, one ear, one eye—well, you get the picture. For Art Fair Philippines 2020, Alonday imagined the other characters that Juan Pikas could have met in his journey.

Walking into Julie Lluch’s solo exhibit Irresistible Grace at Galerie Stephanie’s booth on the seventh floor was like walking into every Pinoy’s nightmare—an entire tragic history rolled into a single room. Jose Rizal looks ready to walk out from the mess happening behind him, as important figures all crowd around two men, one lying perhaps dead in a pool of blood and another hooded figure pulling him away, echoing of the fallen gladiator in Juan Luna’s “Spoliarium.” It is as if you are surrounded by all the figures, but there is a certain energy—almost a delirium and a damning—that it evokes.

Less than two years before his death in December 2020, David Medalla graced the fifth floor of The Link as one of ArtFairPH’s featured artists. He explored the themes of travel, time, and chance in a fully interactive installation called "A Stitch in Time.” Viewers were encouraged to use the available needle and thread to sew small objects and pieces of textured cloth on the huge tapestry—representing the time they've spent on what's now a collaborative work.

Everyday Impunity was one of Art Fair PH 2018’s most crowd-drawing installations. The exhibition space featured a wall of 660 photographs by Carlo Gabuco that documented the current administration’s “war on drugs.” At the center of the enclosed space was an actual chair where a drug suspect from Payatas sat when he was shot by unidentified gunmen. Playing on a loop in the background is the eyewitness account of his 12-year-old daughter combined with haunting music. Made in collaboration with Juan Miguel Sobrepeña for music and Lyle Sacris for lighting design, Everyday Impunity was a sobering, immersive, and eerie experience that left its impact on viewers days/weeks/months/years after the fair.

Seeing Project Pleiades all set up inside a dark room for ArtFairPH 2017 was a completely different experience from when we first saw it as a work-in-progress in Agnes Arellano’s brightly lit studio weeks prior to the fair. The four cast stone sculptures stained with tea were inspired by different mythologies from different civilizations and different eras—all reflecting the artist’s spiritual views and politics about women.

Mark Justiniani is known for enclosed three-dimensional works that play on lights and mirrors to make an illusion of depth and space; and he brought just such a spatial masterpiece as a featured artist for Art Fair PH 2016. Part of his Infinity series was put on display at The Link, including a retablo-like frame, the interiors of a cathedral, and the belly of an atom collider.

Pamela Yan Santos encouraged attendees of Art Fair Philippines 2016 to kick off their shoes and step into a space for respite. Right in the middle of the hubbub of the fair, "In Search Of Meaning" served as a place for her to look back at what sustained her art practice. It featured 700 letters cut out in wood and plastered on the wall, in which the audience could find meaning—literally.

Life-sized installations were hard to miss at The Link's parking space; and Roberto Feleo's “Tao-Tao ng Aklasang Basi – Ang Hanay ng Mga Ñ” was memorable not only for its size but also for its commentary on the pivotal Basi Revolt of 1807. He used his signature style of mythologizing historical figures, juxtaposing our pre-colonial beliefs with the Westerners’ occupation—in itself a sign of rebellion.

Ronald Ventura put on display a large-scale fiberglass installation that showcased his signature style of monochromatic elements surrounding one colorful subject for emphasis. He turned his space into what seemed to be a scene from a dream—masked characters, blobs of blacks and grays, and cloud-like figures. And as the title said, "it wasn't [a dream]" but rather a scene inspired by frequent flooding in the artist's hometown in Malabon.

The first ever Art Fair Philippines only had three featured artists with special exhibits, and one of them was Gabriel Barredo—a pioneering kinetic sculptor. "Asphalt" was a 30-foot long assemblage, consisting of over 90 multi-media pieces representing various cultures. The installation was so memorable that it was later acquired by the French multinational corporation Louis Vuitton Moët Hennessy.