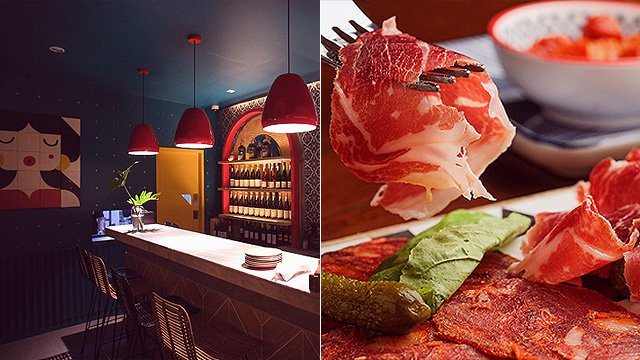 (SPOT.ph) Spanish cuisine evokes a certain sense of comfort; there is something familiar about it, thanks to the great influence it has on the local cuisine and flavor. It comes as no surprise that there are plenty of Spanish restaurants around the Metro, so we’ve gathered this list of places where you can please your palate with tasty tapas and more.

Here are 10 restaurants in Metro Manila for great Spanish food:

Relatively new in the dining scene is this cheeky concept called La Picara, which roughly translates to mischievous or naughty. Indeed, there’s some sort of playful feature in its interiors and food specialties. Enjoy the tropical vibe while you sample the exciting fusion of traditional Spanish cuisine with a contemporary and Asian twist. A good example is the Sisig Pibil Tacos (P340) where the minced pork is enveloped in a crispy tortilla shell. Something unique is the Chili Crab Paella (P890) topped with a soft-shell crab tempura. The menu also has a bevy of wines and libations so you have a good reason to linger for some after-dinner drinks.

Amidst the hip and happening bars and restaurants in the Poblacion area is a bright and homey spot known as La Collina. This Spanish-Italian restaurant has a European-bistro feel where solo diners would feel welcome in the first-floor bar, while those dining with companions can head on to the spacious second floor. The restaurant is a big supporter of the Slow Food Movement, so you’re sure to get good quality food with low-carbon footprint. Taste the freshness of the ingredients in dishes like the Fabada Asturiana (P320), a classic white bean stew with chorizo, bell peppers, and tomatoes. Or if you have time to order in advance, the Cochinillo Black Pig (P1,350/one kilogram) would be worth the wait—and calories.

There are high expectations with Tomatito, especially since it’s been described as Shanghai’s “sexy tapas bar.” It does veer away from the usual and traditional Spanish style, and instead, presents a more fun and cosmopolitan atmosphere. There’s a big signage of the brand in neon lights, colorful wallpaper, and images of pop culture and flamenco costumes to complete the décor. It recently added new must-tries in its menu, but has also maintained old favorites like the Salmon TNT (P625), cream-cheese stuffed bread topped with smoked salmon that’s drizzled with indulgent truffle and honey. New on the menu is the Paella de Mole Mexicano, which is nothing like you have ever tasted before. It has that rich mole sauce—a blend of chocolate and spices—that intensifies the earthy flavor of this rice dish cooked with chicken and mushrooms.

Red brick walls, burnt orange interiors, wines and deli on display…Bistro Madrid is what you would typically expect from a traditionaltapas bar, and it happens to have the same owner as the more established Spanish deli called Terry’s Selection. Here, you can let your taste buds travel to the different regions of Spain with its culinary creations like the dramatic Piggy High (P445) where the chorizo is flambéed with sherry brandy right in front of you, a pretty food post for the ‘gram. Another social-worthy snap would be Terry’s Butifarra Sausage (P345), a Cataluña classic that’s served hanging on a skewer above your choice of side like a bowl of garlicky potatoes, onion rings, or stewed lentils. Both dishes are definitely fun to share with fellow foodies!

For a taste of the San Sebastian coast, Hola Bombón is an excellent bet. Their take on tapas and pintxos leans towards the punchier flavors of Spanish cuisine rather than the aromatic ones, but that just means you’re getting the most out of your night out. The Paella Negra (P925) is a must-try apart from the bite-sized hits they’ll soon be known for, but the crunchy and sour Taco de Pescado (P195) and the soft, savory Chipirones a la Andaluza (P455) are easy favorites, too. Don’t forget to order a refreshing glass of the Tenerife Sea (P380) to wash it down.

It’s all about small snacks here—it’s named Bar Pintxos, after all. Whether you’re here on a date or with a group of friends, you’ll appreciate the fine selection of food and liquor available. On your next night out, get the Pintxos Platter (P650) a sampler of jamon-allioli, gilda, salmon, butifarra, chorizo y huevos, and brie-cebolla. Or share a meat-and-cheese plate with the Charcuteria y Queso Platter (P1,200) that has jamon serrano, chorizo iberico, salchicon iberico, queso de cabra, and queso manchego. Pair it with Pintxos Pale Ale on tap (P375) and you’re off to some good times.

It’s easy to feel welcome in Calderón, a homegrown Spanish-style kitchen that cooks up favorite family recipes. The restaurant has a cozy ambience with brick walls, pops of color and pattern, and general warm tones—a place where you can bring your family for a hearty meal, or grab some tapas and wine with your special someone. Whatever the occasion, the Chori-Gambas Al Ajillo (P460) will leave a good impression with the combo of chorizo and shrimp packing a flavorful punch. A more filling option would be the Cordero Adobado (P610), lamb version of adobo—for the meat lovers out there. But leave room for any of their paella offerings—the Paella con Setas, Manchego Y Esencia de Trufa (P1,120/pequena; P2,260/mediana; P4,360/grande) would be the most decadent with truffle oil on top of mushrooms and manchego cheese. Grab a glass of sangria or a bottle of red and you’re all set.

From a hole-in-the-wall, Barcino has evolved into popular hangout place that has several branches around the Metro. It pays tribute to the Spanish wine culture, which you’ll see immediately with the wine bottles on display, and its wide selection from noted wine regions like Rioja, Ribera del Duero, and Penedes. It’s been 15 years since they first opened and has since then grown into a full-fledged restaurant and bar with an evolving menu. Some fresh picks you might want to try are the Empanada de Zamburiñas (P580), scallop-filled empanada with aioli sauce; or the Alcachofas Salteadas con Jamon (P520), artichokes and jamon serrano sautéed in garlic. A bottle of Glarima Joven Tinto (P750), a mix of merlot and tempranillo, is a smooth and well-balanced red wine that would go well with the tapas.

If it’s hip Spanish bites that you seek, look no further than Las Flores. Catalan cuisine gets happily remixed at this chic joint, which are best enjoyed the way the Spanish would—while relaxing with friends, with a pitcher of sangria or two to pass around. Their modern tapas are small in size yet big in impact, with a quirky lineup that includes Conos de Tartar de Salmon (P595), salmon tartar cones with white truffle oil, wasabi mayo, and kimchi mayo; and the Angus and Foie Minis (P995), which has beef tenderloin, foie gras, and caramelized apples on pan de sal. But their mains are worth saving room for, too: try the Solomillo de Ternera (P1,490), beef tenderloin with potato tatin, french beans, and foie gras for an additional P350; or the Salmon a la Bilbaina (P795), salmon with baked potatoes and vask sauce. The meal wouldn’t be complete without a pan of paella on the table, and their Paella Cochinillo (P1,295) with suckling pig is a standout.

Terry’s Bistro & Gourmet Store started as a deli before evolving into a full-fledged restaurant specializing in Spanish eats using ingredients flown in straight from the country itself. In their official website, owner JC de Terry likens food to art—a philosophy you’ll find evident as you browse through their menu, which features both timeless classics and more innovative bites. Start your meal with the Elegant Oyster Soup (P545), a soothing soup with freshly-shucked oysters and baby artichokes enriched with sage; or with tapas like the Stuffed Asturias Piquillo Peppers (P555), pintxos of Rioja-Chorizo cooked in a Rioja wine reduction and laid on a bed of potatoes. For mains, try the Super-Cochinillo Confit (P2,125), a suckling pig confit dish with an especially crisp, lacquered skin and fork-tender meat; or the Super Paella Parellada (P1,380), a hearty paella dish with shrimps, squid, pork, chicken, Butifarra sausage, and Spanish chorizo on a saffron rice base.