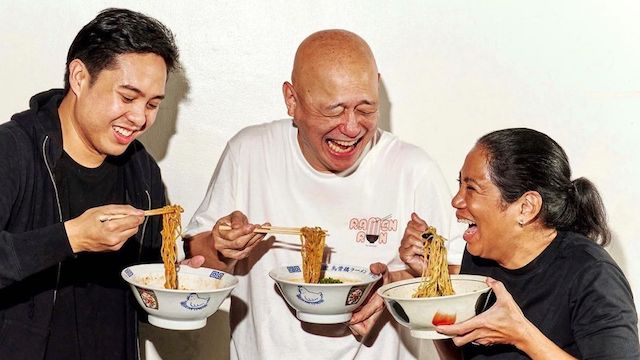 Once dubbed a "ramen nazi", Chef Tamura is now smiling.

(SPOT.ph) Long before the ramen craze hit Manila, there was Ukokkei Ramen Ron—the ramen joint famed for their great-tasting, real-deal, hearty ramen, just like you can find in Japan. They even landed the number one spot in the 2011 and 2013 iterations of our Top 10 Ramen Joints in Manila list. Beyond that, Ukokkei Ramen Ron was infamous for being helmed by a notoriously stern chef, dubbed by some as the “Ramen Nazi” for his uncompromising rules—such as no sharing or loitering after eating, and no taking of photos—though that definitely has not stopped ramen lovers from dining in and savoring their winning noodle soups. Just earlier this November, the ramen joint relaunched itself—this time as Ramen Ron, offering DIY ramen kits, with Chef Tamura teaming up with 2016 Asia’s Best Female Chef Margarita Fores (of Cibo, Grace Park, and Lusso) and son Amado Fores (of a mano).

According to an Instagram post by Margarita, Chef Tamura never used to smile, and she herself got thrown out of the restaurant once as she insisted on bringing in Diet Coke which the chef did not allow. "He's very strict, diba?" Margarita shares in an interview with SPOT.ph. But that did not stop their love for the humble ramen joint. "Ukokkei Ramen Ron was really Amado's and my favorite... even before ramen was fashionable, Ukokkei Ramen Ron is the most iconic place. It was a no-frills [restaurant] and Tamura-san was always over the stove. We used to go there a lot with family and friends, but of course we were very careful not to disappoint [Tamura-san] because he always has a serious face."

It so happened that one of Margarita's first cousins, Gerard Henson (who works as a doctor) was a regular at the restaurant. "He's a [huge] Japanophile. They used to go to [Ukokkei] Ramen Ron for lunch and sometimes go back for dinner, so he became like a super regular customer," Margarita tells us. Given Chef Tamura's hard-to-please image, it's worth noting that Henson became one of the few Filipinos in Manila that—in Margarita's words—could "bring a smile to Tamura-san’s face." It even came to a point that Tamura would consult Henson whenever he needed medical advice for himself or his staff. "I guess they built a really nice relationship," Margarita shares.

Ukokkei Ramen Ron apparently closed their Pasay Road shop "I think even before COVID," says Margarita. "A lot of time had passed already, so Tamura was thinking, 'should we just go back to Japan?'" It was then that Henson had the idea of asking Tamura if he wanted to do ramen again. "Gerard and I chatted about it with Amado and we decided it's something worth looking into," Margarita shares. They decided to meet with Tamura to ask if he was willing to go back to business—but with a catch. "We had to ask him if he's willing to do takeaway, and to do ramen kits," says Margarita, who notes that Ukokkei Ramen Ron was notorious for "never, never" allowing takeaway—not even for orders you've paid for. "[The kits] are really the only way the business can survive today during COVID, since it would have taken too much to really start dine-in operations because times are so challenging."

Surprisingly, Chef Tamura obliged. "He agreed, also because his staff are still kind of hanging around him and hoping that they can work again, etcetera," says Margarita. Coincidentally, Margarita's own catering commissary kitchen had extra space that was not being used, and they decided to utilize it for Ukokkei Ramen Ron. "It was also a way to make our operation more efficient. So we decided to test it, and I guess the rest is history."

Ukokkei Ramen Ron is now Ramen Ron, and the venture has been met with great success. The demand has been so high that they currently have a backlog. "We're very, very happy that people are so happy because there are so many people who grew up eating his ramen, so they're really happy that they can have the product again." Plus, as Margarita notes in her Instagram post, the once-stern chef is now smiling.

At the moment, the powerhouse team serves Ukokkei's best-known ramen variants in ramen-kit form. "We’re doing it slowly and getting our feet wet and getting the operation more streamlined, and it’s still a work in progress," shares Margarita. The current short-but-sweet selection includes the basic (but not boring) Ukokkei Shoyu Chashu Ramen Kit (P480), the hearty Ukkokei Miso Chashu Ramen Kit (P480), the rich and spicy Tantanmen Ramen Kit (P480), and the more refreshing Hiyashi Goma Ramen Kit (P470). They've also got Frozen Gyoza (P180/five pieces) that makes for the perfect accompaniment to their noodles. But Ramen Ron's got more up their sleeves for the future, as they're looking into offering Ukokkei's fan-favorite chahan and even the cult-favorite Butter Miso Ramen soon.

Ramen Ron Margarita Fores Food Delivery Ramen Ramen Kit Tpc-000001 Cvd Services Directory New Normal Foodie Food News Metro Manila Dining Scene
Your Guide to Thriving in This Strange New World
Staying
In? What to watch, what to eat, and where to shop from home
OR
Heading
Out? What you need to know to stay safe when heading out