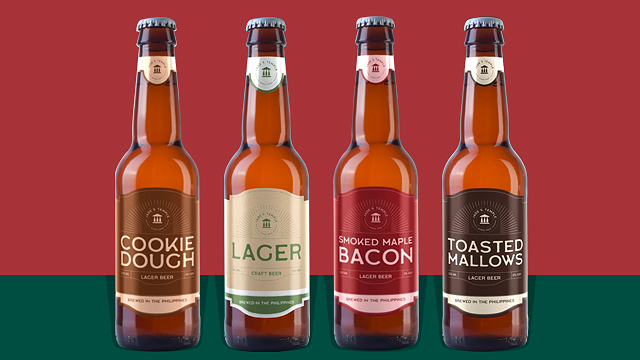 No need to go chasin' with these Lager and Craft Beers.

(SPOT.ph) As we all bravely head out into this new world of a pandemic-adjusted nightlife, many of us will most likely be lost and not updated as to what bars are being frequented and what drinks are being downed. Some may even be going out to finally live-up their youth for the first time! The pandemic has been that long, guys.

In such a world, it's fortunate that the relatively new microbrewery Jade's Temple is mixing together a selection of classic lager beer with spicy, new craft beer, now being served along bars that have served as the pillars of the Wilson Street nightlife in San Juan since pre-panini times.

Also read:
The 10 Kinds of Drunks You Will Meet in Life
Cheers! The Philippines Ranks High Among Asian Countries That Search for Beer

With the recent celebration of Father's Day, Jade's Temple has launched their brew of the classic Lager beer on the menus of McLaren's Pub and Thirsty Barber, located along Wilson Street in San Juan city.

Perfect for all dad's and "dad bod" dudes, the Lager beer is an easily recognizable, back-to-basics beverage for Jade's Temple to include among their selection of craft beers that come in a variety of naturally made tastes. The microbrewery has so far been geared towards serving sweet and smooth drinks that have relatively low alcohol content (read: more for chill-numans), so the classic Lager fits right in and even serves as an easy-going launching pad to the more "out there" flavors on the menu.

The other craft beers hitting the menu at P175/bottle and P185/sub-zero bottle include the best-seller Toasted Mallows, which boasts a well-defined, toasty biscuit contrast to the regular alcoholic bite of beer. Other notable standouts include the Peach Mango, with its sweet fruit mixture giving it a distinctly tropical refreshing taste; the Black Forest, for its interestingly dessert-like tastes; and the Smoked Maple Bacon, which makes you feel like you're chowing down on some ribs while chugging on some beer, just with one sip.

There are other flavors of the craft beer to choose from, including Cookie Dough and Salted Caramel—with a selection of holiday drinks on the annual rotation as well—all of which form to create a diverse family of drinks, with the Lager now at its head.

McLaren's Pub is a bar and resto that's been a popular hang-out spot on Wilson Street for over a decade now. And yes, it's inspired by the How I Met Your Mother pub of the same name. Meanwhile, Thirsty Barber is a speakeasy "hidden" behind a bookshelf inside a—yup, you guessed it—barber shop along Wilson.

Jade's Temple (coincidentally, also short for its owners Jas and Dea) is a microbrewery located along T. Bernardo Street in Mandaluyong City. Besides McLaren's and Thirsty Barber, the craft beers are also available via Grab Mart, Bar Manila (with shipping nationwide), and at The Tasting Club at Power Plant Mall in Makati.

Also read:
LIST: Online Delivery Services For All Your Liquor Needs
Need a Pick Me Up? You Can Now Order Japanese-Inspired Cocktails at this Makati Café